Please ensure Javascript is enabled for purposes of website accessibility
Log In Help Join The Motley Fool
Free Article Join Over 1 Million Premium Members And Get More In-Depth Stock Guidance and Research
By Jason Hawthorne - Mar 5, 2021 at 9:12AM

Competition is heating up, but the company's market leadership remains unchallenged.

After being relegated to science fiction for most of the 20th century, robots have been more visible over the past two decades. Although most real-world applications so far have been industrial, Intuitive Surgical (ISRG 0.30%) has been slowly changing that. The company's da Vinci surgical systems only assist trained humans, but they have become synonymous with the term "robotic surgery."

After so much success, interested investors will want to determine whether the future can be as bright as the past, or if the combination of COVID, regulatory hurdles, and competition will chip away at the dominance this company has established since going public in 2000. 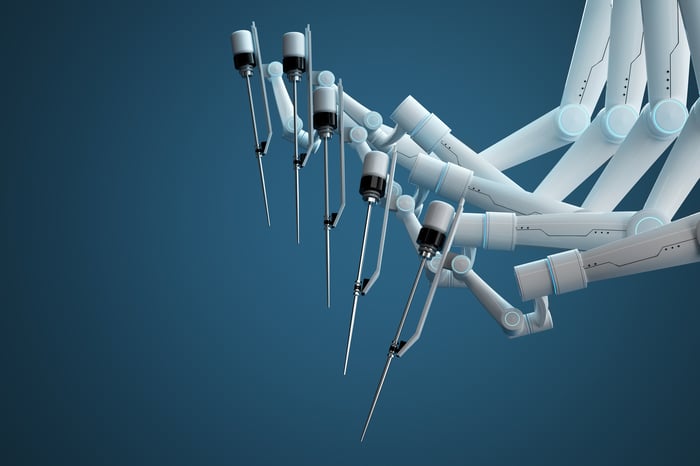 The arms of a surgical robot. Image source: Getty Images.

Early during the pandemic, when hospitals were stopping elective procedures to dedicate resources to patients with COVID-19, the company's sales tumbled. Year-over-year revenue declined 22% in the second quarter of 2020 on 19% fewer procedures.

Procedures and revenue rebounded slightly in the following quarter, up 7% and down 4.5%, respectively, compared to 2019. The fourth quarter finally saw year-over-year revenue growth of 4%, but management remained cautious.

Citing a holiday rise in COVID-19 cases, CEO Gary Guthart pointed to a lag in diagnostic cases at hospitals and weak surgery data spilling over from December into January as an indication that the sales of da Vinci systems would take several quarters to normalize. With fewer cases, utilization of existing machines will remain low, delaying the need to add capacity.

Although this is definitely a concern, it's a temporary one. By the end of 2021, orders and installations should be back to normal. System growth has averaged 12% a year over the past decade and 28% for the three years prior to the pandemic. Investors are hoping the return to normal comes sooner rather than later.

In recent quarters, management has become much more vocal about a shifting regulatory landscape in the U.S. and Europe, and the requirement for more data than ever before prior to approval. Guthart has said the requirements have stabilized at a level higher than in past years. Although it's a short-term nuisance, this change stands to benefit incumbents like Intuitive over time, because existing systems will sit on the market longer while innovations wait for approval.

One region where the company has drastically different regulatory experiences is Asia. Guthart has repeatedly cited South Korea as being quick to allow innovative products to market, while China's centrally managed system is more cautious. System sales in the region grew 60% from 2018 to 2019 before falling off during 2020 due to the pandemic. Products launched in China must have a longer history of performance because that country's version of the Food and Drug Administration handles first-generation products very cautiously. Regardless, the company remains excited about its joint venture with Chinese company Fosun Pharma and expects strong, if somewhat turbulent, demand over time.

One of the risks in China is the launch of companies trying to bring competitive surgical systems to market. This has already happened in South Korea. That country's embrace of innovation is a double-edged sword for Intuitive -- South Korea's first approved surgical robot was made by Meere back in 2017.

Asia isn't the only region where companies are tired of Intuitive reaping the lion's share of the robotic surgery opportunity. Closer to home, the company faces long-awaited challenges from device makers Medtronic (MDT 1.37%) and Johnson & Johnson (JNJ 0.03%).

Medtronic made its intentions clear by acquiring spine surgery innovator Mazor Robotics in 2018. It is planning a launch of its Hugo surgical system outside the U.S. to collect data, and expects to submit for an investigational device exemption from the FDA in the next month. That designation would allow the device to be used in a clinical study.

Johnson & Johnson has a not-so-secret weapon in the battle for the robotic surgery market: the founder of Intuitive Surgical. Dr. Fred Moll, who practically invented the industry when he founded Intuitive in 1995, is chief development officer at the company's devices unit. With his guidance, the healthcare giant plans to commercialize three robotic platforms it gained via acquisition.

First, the Velys platform is for total knee replacements. This is the type of high-volume, repeatable procedure that is ripe for robotic assistance. But it's a threat to Stryker and Smith & Nephew, not Intuitive.

Second, the Monarch platform is for a procedure that lets doctors inspect the lungs and air passages. It will eventually be used for lung biopsies, but Intuitive is already staking a claim here with its Ion system. In fact, Intuitive received FDA approval for the procedure in the first quarter of 2019.

And third, Johnson & Johnson's Ottava general surgery system was introduced in November after much anticipation. The device integrates with an operating table and has six arms, several more than systems currently on the market. The goal is flexibility. If Ottava can perform many types of operations, it will help hospitals avoid buying multiple robots, each with a different purpose. The system is unlikely to come to market before 2024.

Clear skies, with a few clouds on the horizon

Despite some regulatory red tape at home and upstart competition abroad, the path for Intuitive Surgical to continue its decades of growth seems clear. The company is well ahead of the competition with nearly 6,000 surgical systems already installed around the globe, and it will be hard for competitors to replace them. That is especially true as innovation in da Vinci systems, instrumentation, and capability continues to increase both machine utilization and company sales.

As a shareholder, I'll be watching the regulatory progress of the competing systems. But changes in the approval process have only made it harder for the competition to get a foothold. With no imminent threats for at least the next few years, the shares will stay tucked away in a part of my portfolio as far from the sell button as any I own. For those looking to add the stock to their own portfolios, the recent market volatility may have provided the opportunity they've been waiting for.