Please ensure Javascript is enabled for purposes of website accessibility
Log In Help Join The Motley Fool
Free Article Join Over 1 Million Premium Members And Get More In-Depth Stock Guidance and Research
By Billy Duberstein - Mar 5, 2021 at 10:05AM

Shares of Desktop Metal (DM 3.98%) fell 12.7% in February, according to data provided by S&P Global Market Intelligence. The new-age 3D printing company, which came public in December when it was acquired by SPAC Trine Acquisition, fell in February along with many other high-growth stocks.

Of course, the February fall came after the stock rose handsomely in January, amid market enthusiasm for SPACs and the announcement of another bolt-on acquisition. The current price is still 60% above levels prior to the initial merger in December. 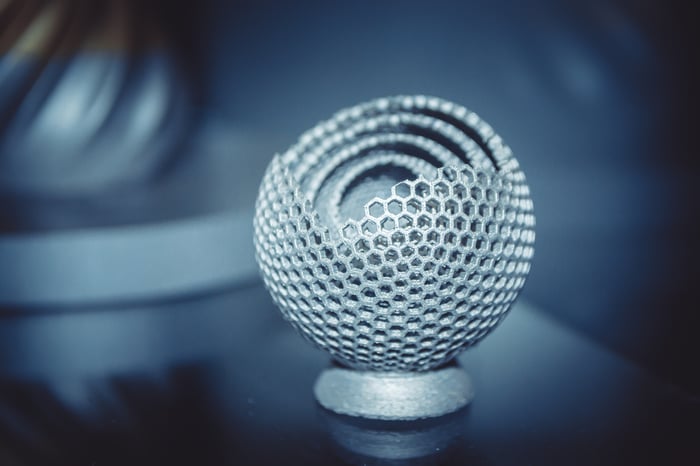 There wasn't any particularly relevant news from Desktop Metal in February. It did close the acquisition of EnvisionTEC, a Michigan-based 3D-printing company, for $300 million. However, that acquisition had already been announced in mid-January.

More likely, Desktop Metal sold off hard due to a rise in long-term bond rates, along with many other young growth stocks. Desktop Metal has very promising technology, but only made $8.1 million in revenue in the first nine months of 2020, down 61% from the prior year, and had operating losses of $65.8 million, as COVID-19 took its toll on factory production and new technology adoption. Needless to say, profits are a ways off, and higher interest rates will greatly affect valuations for these types of early-stage companies.

Of course, not only were 2020 results heavily affected by the COVID-19 pandemic, but that revenue was only made up of Desktop's oldest system, Studio System. The company has three other technologies coming to market in late 2020 or in 2021, which is where the real excitement for Desktop lies. These include Production System, Shop System, and Fiber.

Up until now, 3D printers had really only been able to provide value in prototyping, not mass production. If Desktop can finally crack the code and bring 3D printing to industrial mass-production environments, it could be a game changer. While definitely speculative, Desktop is a company to keep your eye on, especially after this month's sell-off.