Please ensure Javascript is enabled for purposes of website accessibility
Log In Help Join The Motley Fool
Free Article Join Over 1 Million Premium Members And Get More In-Depth Stock Guidance and Research
By Leo Sun - Mar 6, 2021 at 6:55AM

Which high-growth food company will fare better in a post-pandemic world?

Beyond Meat made history as the first plant-based meat maker to go public in 2019. DoorDash became the largest food delivery platform in America that same year, and it went public last December. 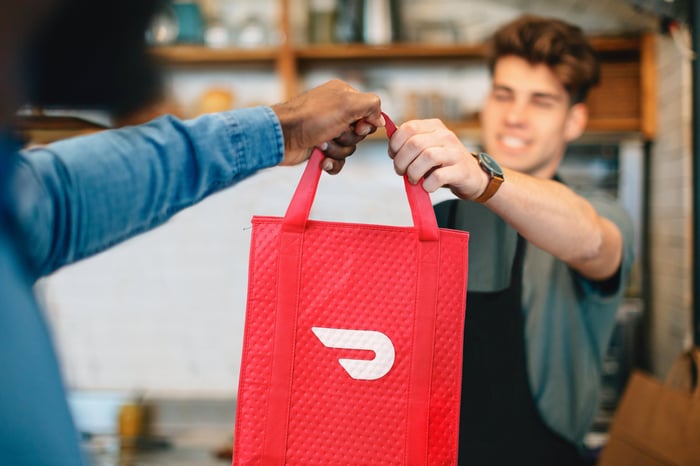 Both could remain volatile as investors rotate out of growth stocks into value stocks amid concerns about rising interest rates. But is one of these new food stocks a better pick for bold investors this year?

How did the pandemic affect these two companies?

The pandemic generated headwinds for Beyond Meat, as restaurant closures reduced its sales to food service customers. However, it largely offset that slowdown by selling more of its products to large retailers, which benefited from a major acceleration in pandemic-induced shopping.

As a result, its revenue soared 226% to $2.89 billion in 2020, marking an acceleration from its 204% growth in 2019. However, DoorDash expects its orders to decelerate significantly after the public health crisis abates, and analysts expect its revenue to rise just 28% in 2021.

Based on these forecasts, Beyond Meat and DoorDash trade at 15 times and 13 times this year's sales, respectively. Those price-to-sales ratios aren't low, but the two stocks actually remain cheaper than many other high-growth stocks in this frothy market.

But neither company is profitable yet

Its adjusted EBITDA -- which excludes its stock-based compensation, COVID-19 costs, and other one-time expenses -- still declined 53% to $11.8 million. Analysts expect it to remain unprofitable this year. It could be tough for Beyond Meat to generate stable profits for two reasons. First, it still needs to heavily market its products to gain mainstream attention, retain its retail and dining partners, and widen its moat against competitors like Impossible Foods and Tyson Foods (TSN 2.42%).

Second, Beyond Meat's plant-based meat still costs more than real meat. That gap is gradually narrowing, but it must either match or undercut the price of real meat to gain more mainstream shoppers. A growing number of competitors in the meatless market could further impact its ability to raise its prices.

Analysts expect DoorDash to squeeze out a slim adjusted profit this year, but it also faces several pressing issues. DoorDash controls over half of the U.S. food delivery market, but Grubhub (GRUB) and Uber (UBER 1.84%) Eats aren't down for the count yet.

Just Eat Takeaway's (JTKWY -3.16%) upcoming takeover of Grubhub could breathe fresh life into the former market leader, and Uber's takeover of Postmates could have the same effect. As the pandemic passes and restaurants regain the upper hand again, these three platforms will likely resume their aggressive war of margin-crushing promotions.

Tighter regulations for gig platforms like DoorDash, which have already been proposed in several states, could also force the company to raise its wages or classify its Dashers as employees instead of contractors. All those headwinds could prevent DoorDash from generating stable profits.

The winner: Beyond Meat

I'm not a fan of either stock right now, but Beyond Meat is a better overall investment than DoorDash for two reasons: Its revenue growth is more stable and its core market hasn't been saturated yet.

Beyond Meat faces competitors, but there could be ample room for all these plant-based players to grow without trampling each other. That's not the case in America's saturated food delivery market.

Beyond Meat won't generate stable profits anytime soon, but economies of scale could gradually kick in and narrow its losses. These strengths all make it a better buy than DoorDash, which will simply face too many uncertainties in a post-pandemic world.