Please ensure Javascript is enabled for purposes of website accessibility
Log In Help Join The Motley Fool
Free Article Join Over 1 Million Premium Members And Get More In-Depth Stock Guidance and Research
By Adria Cimino - Updated Mar 7, 2021 at 9:57AM

Results are encouraging -- but are they strong enough to stand out?

Ocugen (OCGN 0.96%) officially joined the coronavirus vaccine race last month when it partnered with Indian company Bharat Biotech -- which already had a vaccine candidate in phase 3 studies in its home country. The two agreed to co-commercialize an eventual vaccine in the U.S. Ocugen's shares have soared about 330% since the start of February on optimism about this potential revenue source.

This week, Bharat reported favorable data in its first interim trial report. Ocugen stock rose nearly 9% in one trading session, then erased gains in the days to follow. Now the question is whether the vaccine data report is a good reason to buy Ocugen shares -- or is it best to wait for more details? 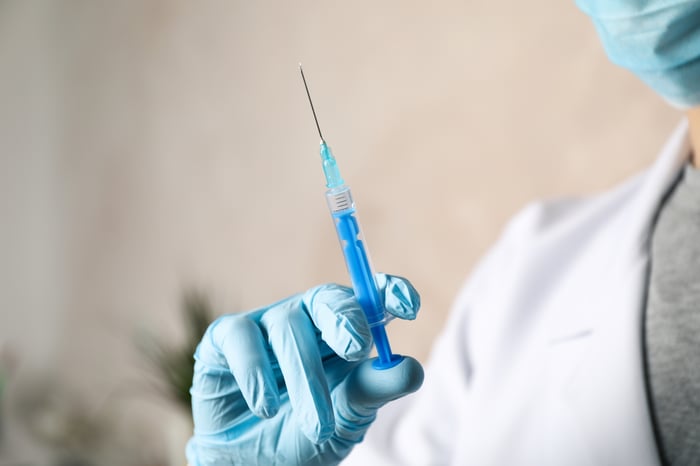 Ocugen is an unexpected entrant in the coronavirus vaccine field because it doesn't specialize in infectious diseases or vaccination. In fact, Ocugen develops gene therapies for eye diseases that cause blindness. The company has four mutation-associated retinal degeneration candidates set to begin phase 1 clinical trials. And it has four other candidates in earlier-stage studies.

This doesn't mean Ocugen can't succeed in the coronavirus vaccine market. The company has assembled a vaccine advisory board to guide it down the regulatory path. The board includes six experts from industry and academia. In addition, Ocugen is preparing funds needed to advance the Bharat vaccine candidate in the U.S. Last month, the company raised $23 million in a direct offering to institutional investors.

Now, let's have a look at the data. Bharat studied Covaxin, its vaccine candidate, in a phase 3 trial including 25,800 participants. Covaxin was 80.6% efficacious at preventing coronavirus infections after the second dose. Bharat noted 36 coronavirus cases in the placebo group and seven cases in the Covaxin group. Bharat's analysis also showed Covaxin's ability to protect against the U.K. variant.

As part of the Ocugen-Bharat agreement, Ocugen will take 45% of U.S. profits if the potential product is commercialized here. Bharat will keep the rest. Ocugen said it's started talks with the U.S. Food and Drug Administration regarding a possible regulatory pathway for Covaxin in the U.S.

There could be two near-term hurdles for Covaxin in the U.S. market. First, it's possible the FDA may ask Ocugen to conduct a study in the U.S. The agency might not be willing to base an authorization decision on the Indian trial alone.

My second concern has to do with market opportunity. The U.S. recently bought enough Moderna and Pfizer doses to vaccinate nearly all Americans. Late last month, the FDA authorized the Johnson & Johnson vaccine, and the company is set to ship 100 million doses of vaccine within the U.S. in the first half of the year. That more than covers all Americans. And the U.S. has ordered 100 million doses from Novavax, too. The biotech plans on completing an Emergency Use Authorization request in the second quarter.

All of this means there won't be much need for other vaccines in the U.S. right away. This is a big problem for Ocugen since the Covaxin collaboration deal applies only to the U.S. market. So, it can't generate revenue from Covaxin elsewhere.

Of course, opportunity in the U.S. may exist farther down the road. The government will probably look at vaccine performance and price as more vaccines become available. But rivals will have to excel in order to unseat current leaders. So far, Covaxin's efficacy of more than 80% is a positive factor, especially in an environment where variants of concern are gaining ground. Market leaders Moderna and Pfizer produced more than 94% efficacy in trials -- but their trials took place before these variants emerged.

Still, carving out share in a market dominated by Moderna and Pfizer won't be easy. Both companies are showing they can beat new variants of concern. In vitro tests demonstrated their vaccines worked against the U.K. and South African variants. And both companies are working on strain-specific boosters.

Overall, Covaxin's results aren't complete enough for us to draw major conclusions. We're still missing key points. For instance, how effective was Covaxin versus placebo in preventing severe disease? I'm also interested in safety details. The good news is, Bharat plans to analyze data once the trial reaches 87 coronavirus cases and then again with 130 cases. We may have more information then.

So, is it time to buy Ocugen shares? In my opinion, it's too early right now. How about once Bharat releases more trial data? That will depend on the strength of the biotech company's data -- and any further guidance from Ocugen regarding its path to U.S. authorization. But even then, I'm concerned about the company's ability to stand out in the soon-to-be crowded U.S. vaccine market.