Please ensure Javascript is enabled for purposes of website accessibility
Log In Help Join The Motley Fool
Free Article Join Over 1 Million Premium Members And Get More In-Depth Stock Guidance and Research
By Alex Carchidi - Updated Mar 7, 2021 at 9:56AM

The competitive landscape is flattening out.

As if the coronavirus wasn't ferocious enough, viral variants are now spreading across the globe, threatening to undo the ongoing hard-fought progress in immunization. Thankfully, vaccine developers are more prepared this time, and the victors of the coronavirus vaccine race are already gearing up to win the next round against the virus.

Right now, the vaccines from Moderna (MRNA -4.97%) and the joint effort of Pfizer (PFE 3.59%) and BioNTech (BNTX -2.90%) appear to be at least partially effective against the variants. That's good news, because it means that manufacturing and administration of the current crop of vaccines can (and should) continue at full speed.

But the prospect of a coronavirus variant that can evade vaccine protection is too dangerous to leave to chance, so work on the next generation of jabs is already under way. This could be significant for investors: The new vaccines might just lead to significant differences in revenues for Moderna, Pfizer, and BioNTech. 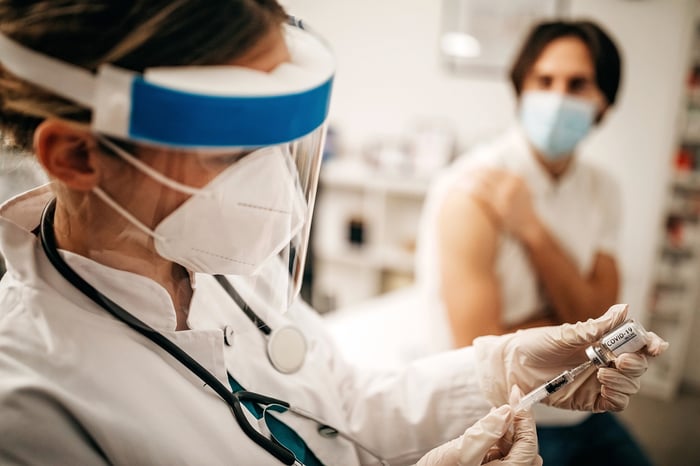 Moderna is examining three different booster shot strategies, including a variant-specific booster, a third dose of its current candidate, and a multivalent booster that combines its current candidate with variant-specific material. If it could address the risk of variants by adding one of these boosters to its current dosing regimen, the revenue potential would be substantial, as previously immunized people would become potential customers (via their healthcare system) once again.

The company is also considering whether to adapt its main candidate to include protection against the new variants directly. In that case, it would probably need to spend slightly more to make each dose, and it wouldn't be able to sell doses to previously immunized people, at least in the short term. However, it would make the product more appealing to healthcare systems in countries where the variants are spreading aggressively, such as South Africa.

Similarly, in conjunction with Pfizer, BioNTech is evaluating in a clinical trial whether delivering a third dose of its jab could be sufficient to augment the existing level of immunity that its candidate currently confers against the variants. A change in regimen that uses additional doses could easily lead to a windfall in revenue down the line, so there will be implications for the pair's stock prices depending on what they ultimately decide.

BioNTech is also considering whether to make a variant-specific vaccine that could supplant or be used in addition to the ones currently being distributed. That approach might be more effective for patients, but -- and this is true for Moderna as well -- it could potentially take too long to get out the door to have the greatest positive effect.

Pfizer forges ahead with storage optimizations

Combating viral variants aside, Pfizer and BioNTech are aiming to make their vaccines easier to store. While Moderna's candidate requires a standard clinical freezer to stay stable, Pfizer's needs a much colder type of freezer that is much rarer in hospitals and clinics. So, Moderna's jab is easier to distribute to healthcare systems with fewer resources, which is a significant competitive advantage.

To address this issue, BioNTech has been performing stability studies, and it submitted a packet of information to the U.S. Food and Drug Administration (FDA) in late February. Its data argued that the vaccine could be stable at standard clinical freezer temperatures for up to two weeks, which would be quite the improvement. If regulators agree, expect the next generation of jabs to have similar storage characteristics to Moderna's.

Furthermore, Pfizer is working on a freeze-dried version of its candidate, which could launch sometime this year. Whether the powdered vaccine format will make its debut in the next generation of jabs or the one after that is still up in the air, however. Either way, investors should take note that Moderna's advantage in stability and distribution characteristics might be eroding.

It's too early to tell which company will benefit the most

Between new booster shot protocols, doses for new variants, and upgraded storage characteristics, the next generation of coronavirus vaccines will continue to have a massive market to penetrate for the foreseeable future. Expect Pfizer, BioNTech, and Moderna to keep flourishing, and be aware that their vaccine market shares may be limited more by manufacturing capacity than by product characteristics for at least a while longer.

Finally, keep an eye on the progression of coronavirus variants worldwide. If variants prove to be an even larger problem than epidemiologists expect, the work that these companies are doing on the next generation of vaccines will become more valuable overnight.