Please ensure Javascript is enabled for purposes of website accessibility
Log In Help Join The Motley Fool
Free Article Join Over 1 Million Premium Members And Get More In-Depth Stock Guidance and Research
By Jason Hawthorne - Updated Mar 7, 2021 at 9:56AM

This unlikely choice meets several of his criteria.

Last month, U.S. Securities and Exchange Commission (SEC) filings revealed that Warren Buffett had made large purchases of Verizon and Chevron stock in the third and fourth quarter of 2020. Although he seems to have been looking for stable stocks with huge market capitalizations and generous dividends, there is another direction the Oracle of Omaha could have gone that may have netted him better returns over the next decade. Illumina (ILMN -1.40%), maker of genome sequencing machines, may not be the type of secure, stable company Buffett likes, but it is at the forefront of a revolution in medicine and has several traits that the magnate covets. Illumina has a deep moat

In his 1995 shareholder letter, Buffett said that he looks for "economic castles protected by unbreachable moats." He later explained that these moats can come from things like being the lowest-cost producer, having a trusted consumer brand, or a technological advantage. Illumina's moat has been secure since going public in 2000 due to its superior technology. Analysts estimate the company dominates the genetic sequencing industry with about 75% market share.

In the simplest description, Illumina's instruments help its customers read and understand genetic variations. It sells eight different sequencing machines for genetic analyses that range from a simple hour-long run to complex sequencing that can take days. The company operates a razor and blade model, selling the machines and relying on recurring revenue from the consumables associated with performing analyses.

Due to reductions in sequencing costs and advances in data processing, the barriers to using the technology are constantly coming down. Testing was originally only done in labs at research institutions but has expanded to prenatal testing, testing for genetic diseases, and even testing livestock. However, oncology is the most intense area of focus. In fact, management recently counted more than 55 cancer therapies that required a companion genomic test. These types of tests are what allow doctors to keep getting closer to truly personalized medicine, especially for cancer treatment.

In his latest shareholder letter, Buffett laments paying too high a price for Precision Castparts in 2016. He admits to overestimating the sustainable return on tangible assets the company could deliver. This measure of profitability indicates how well management can generate earnings from the physical assets available to them on the balance sheet. Tangible or operating assets are used in the calculation because companies often have non-physical, or intangible, assets like goodwill from acquisitions. Despite showing up on the balance sheet, these are mostly placeholders, not the buildings and equipment used to create products and generate returns.

On this metric, Illumina's 19% nearly doubles its peers Agilent Technologies (A -1.86%) and Thermo Fisher Scientific (TMO -2.24%). In fact, Illumina is much better at generating these returns than the two stocks Buffett actually purchased. 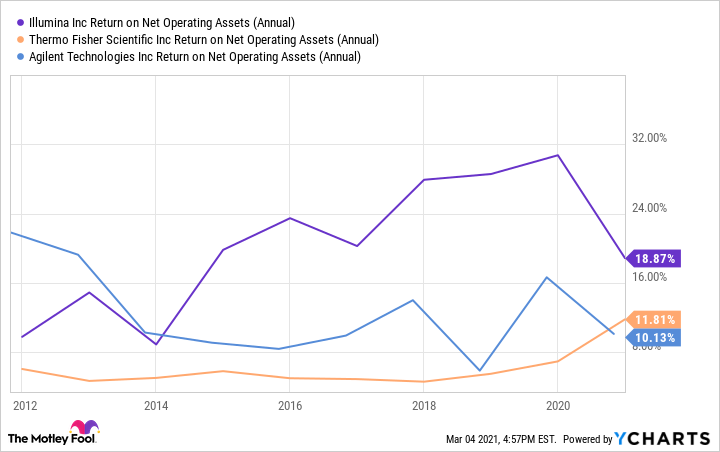 Management has guided for $5.10 to $5.35 in non-GAAP earnings per share for this year, meaning the return on tangible assets would climb to 21%.

Buffett likes to pair another metric with return on tangible assets -- profit margins. In detailing how Berkshire Hathaway (BRK.A -2.26%)(BRK.B -2.53%) has invested in more American assets than any other U.S. company, he pointed out that triumph came not only on the returns generated by those assets but in operating them at high margins. Margin, in this context, means profit margin, and there are several ways to calculate it. I'll use EBIT margin, or earnings before interest and taxes, in honor of Buffett's partner, Charlie Munger, who famously trashed the more often used EBITDA for stripping out depreciation and amortization. Here again, Illumina shines. 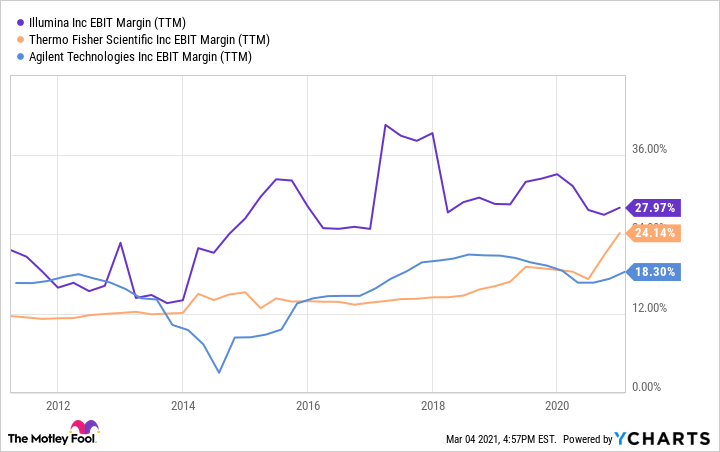 The genomic sequencing star's 28% margin outperforms its peers'. This profitability measure is good for comparing companies, as it includes the depreciation costs associated with capital investments and avoids the confusion that can arise when tax situations may differ year to year.

Why Buffett will never buy Illumina

It's doubtful that the investment legend would ever buy shares of Illumina even though it meets these three criteria. First, he doesn't like to stray from his circle of competence. Buffett has repeated over the years that he avoided technology companies because he didn't understand them. I'd bet the same applies to genomic sequencing. Second, he likes to get a bargain, and the stock has historically traded at a premium due to its massive growth potential and dominant position in the industry.

For investors who are willing to trust that 75% market share, high returns on assets, and fat profit margins are hallmarks of a great company, the recent 30% sell-off from an intraday high may be an opportunity. The stock still trades at 75 times forward earnings, a significant premium to its historical average. However, despite the valuation concerns, a pullback like this doesn't happen often. Buffett likes to say he will buy a great business at a fair price. Based on three of his favorite metrics, he may want to take a closer look at Illumina.