Confusion reigns over whether the gunmaker can continue beating its record-setting results.

One analyst says the gunmaker's stock is set to double like its sales, while another says this is as good as it gets. 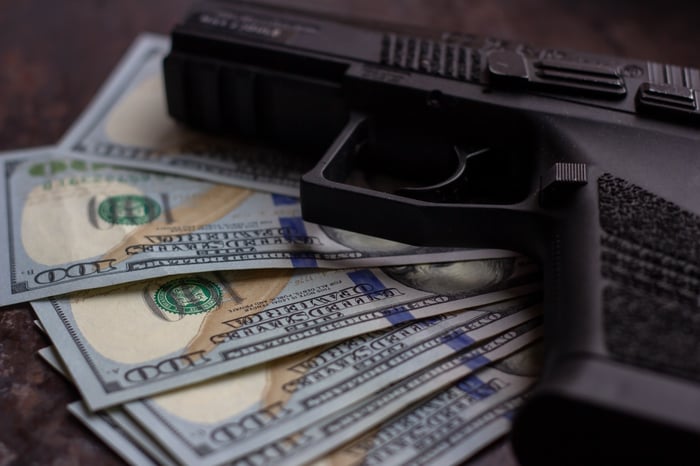 Carried along by the greatest gun sales boom in history, Smith & Wesson is reporting record results. Sales surged 102% in its fiscal third quarter, which follows a 119% gain in the second and a $127% jump in the first.

The FBI's National Instant Criminal Background Check System conducted 39.7 million background checks of potential gun buyers last year, some 40% more than in 2019, and it's running 41% above that rate in the first two months of this year.

Lake Street analyst Mark Smith said that although the gunmaker will start to face tough comparables this year because of the pace of growth the industry recorded last year, he believes demand will continue to be strong and Smith & Wesson and the industry will fare well in the long term. He set a price target of $34 per share, 112% higher than where the gunslinger closed last Friday.

Not so, says Craig-Hallum analyst Steve Dyer, who believes that record pace and the difficult comps will be too high of a hurdle for Smith & Wesson to overcome. Because gun stocks typically top out before their earnings do, he sees the gunmaker having a difficult time outperforming and dropped his price target from $19 to $17 per share.