The rotation out of more speculative stocks like QuantumScape is taking a breather today.

Shares of battery technology company QuantumScape (QS -1.63%) jumped double digits Monday before paring some of those gains. The stock was still up 5.4% as of 3:20 p.m. EST.

As a reminder of how volatile speculative names like this can be, the rebound comes after a nearly 30% drop over the past two weeks.

Today's move wasn't caused by any company-specific news. In fact, there really isn't expected to be important news from the company for some time. Investors are closely monitoring the company as it aims to commercialize its solid-state battery technology. But work is still in the laboratory phase, and QuantumScape itself has said not to expect final results for several years. 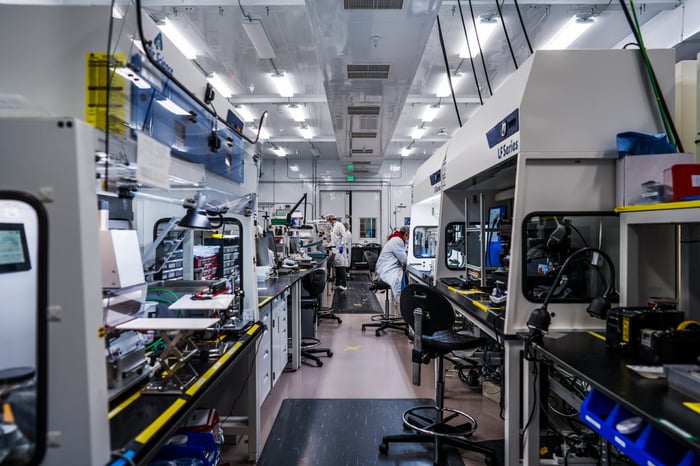 In its latest earnings report released in mid-February, the company said it has successfully built its first multilayer battery cell with four layers. This helps confirm the technology is feasible. Jagdeep Singh, co-founder and CEO of QuantumScape, has said that he plans to scale up the technology to have an eight- to 10-layer cell by the end of this year.

Since that time, the stock market has rotated out of alternative energy stocks, including many names related to the development of electric vehicles. If successfully commercialized, QuantumScape could offer the industry a faster charging battery that could provide longer range with better performance and a longer life cycle than current lithium-ion batteries.

Investors should expect a volatile ride with this stock, however, as has been the case over the past several weeks. Today seems to be a matter of buying the dip for aggressive investors who want to speculate on the company's success down the road.