Please ensure Javascript is enabled for purposes of website accessibility
Log In Help Join The Motley Fool
Free Article Join Over 1 Million Premium Members And Get More In-Depth Stock Guidance and Research
By Timothy Green - Mar 9, 2021 at 7:25AM

There's just no money in delivery.

The COVID-19 pandemic has been a boon for third-party restaurant delivery companies like DoorDash (DASH -1.07%). Dine-in restrictions have forced many restaurants to turn to delivery services to stay afloat, which has resulted in explosive growth for the industry. DoorDash, which claimed a 50% U.S. market share when it went public last year, saw its revenue more than triple in the final quarter of 2020.

This rapid-fire revenue growth has not led to increased profits for DoorDash, or any profits for that matter. The company posted a net loss of over $300 million in the fourth quarter of 2020 on $970 million in sales.

Big losses are not uncommon for fast-growing companies. When the stock market rewards growth above all else, the tendency will be for companies to spend heavily to acquire new customers as fast as possible without much regard for the bottom line. Once these companies scale to a certain size, the bullish argument often goes, operating leverage will kick in and lead to improved profitability.

This argument doesn't make much sense for DoorDash, though, because the company already dominates the market for third-party restaurant delivery in the United States. DoorDash isn't some small player with a huge addressable market to conquer, it's the dominant market leader. 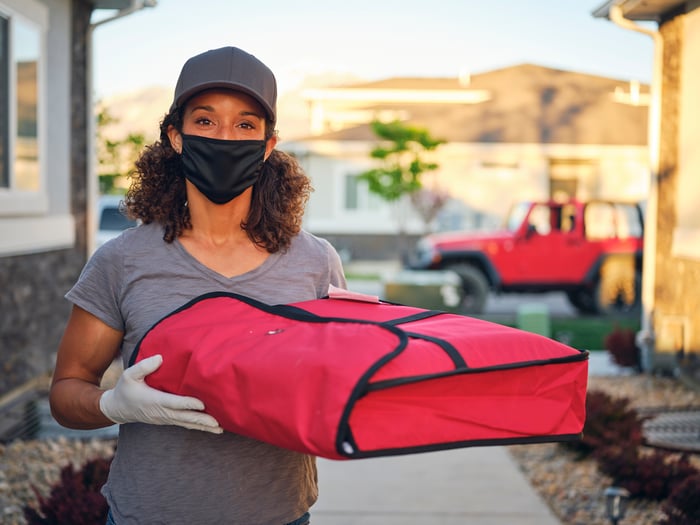 As the pandemic fades, it's very possible that the size of the third-party restaurant delivery market will shrink as people return to restaurants. If DoorDash can't make money now, during the absolute best environment for third-party delivery services, it's difficult to imagine the company ever becoming consistently and sustainable profitable.

The fact that DoorDash can't turn a profit during the pandemic is reason enough to avoid the stock, in my opinion. But if you need another data point, the CEO of Domino's Pizza (DPZ 1.56%) has you covered.

"We've never made a dollar delivering a pizza"

DoorDash generates revenue by charging fees to both the restaurants on its platform and to its customers. Restaurants often charge higher prices through services like DoorDash to offset these fees, so customers end up bearing much of the cost of delivery.

Whether customers will be willing to pay such high prices to get restaurant food delivered once the pandemic is over is an open question. My guess is no, or at least not nearly as often. But even if consumer behavior doesn't change, some comments from Domino's CEO Ritch Allison during the company's fourth-quarter earnings call should have DoorDash investors worried.

Domino's has been delivering pizzas to its customers for decades. The company is an expert on the economics of restaurant delivery. It long ago figured out how to deliver pizza and turn a profit in the process.

But that profit does not come from the delivery itself, it comes from the product. "In 60 years, we've never made a dollar delivering a pizza. We make money on the product, but we don't make money on the delivery," Allison said during the earnings call. "I'd be honest, we struggled a little bit understanding the long-term economics in some of the aggregator businesses."

Allison expects the high fees necessary to sustain aggregators like DoorDash to eventually put pressure on independent restaurants. The restaurant business is already a low-margin affair, and restaurants can only pass off so many costs to their customers. "And the customers over time are going to start looking at the free delivery that cost them $15 to get $12 worth of food when they start digging in to look at service fees and service charges. So, we're just not sure how it all plays out," Allison said.

If Domino's doesn't make any money on delivery, it's hard to imagine that DoorDash ever will, at least at the scale necessary to justify its valuation. DoorDash is currently valued at nearly $50 billion. This is a company that will probably never consistently generate much in the way of profits, and a company that will probably see its market contract once restaurants fully reopen. I just don't see any reason to buy this stock.