Investors weren't very impressed with ChargePoint's (CHPT 0.27%) first earnings release as a public company, sending shares lower by 8% on Friday. The electric vehicle (EV) charging specialist completed its merger with Switchback Energy Acquisition, a special-purpose acquisition company (SPAC), earlier this month, which is known as a de-SPAC transaction once the deal closes. EV stocks have been especially volatile in recent weeks as the broader tech sector gyrates due to fluctuating interest rates. 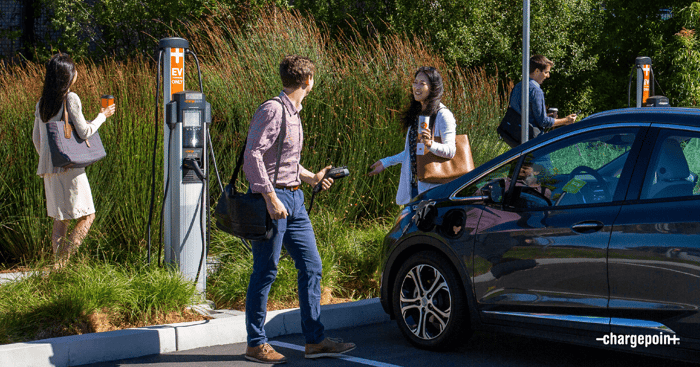 The pandemic takes its toll

Revenue in the fiscal fourth quarter was $42.4 million, down modestly from a year ago. That brought revenue for full-year fiscal 2021 to $146.5 million, up slightly from the $144.5 million in sales in fiscal 2020. When the merger with Switchback was initially announced, ChargePoint was clear that the COVID-19 pandemic would adversely impact revenue. The company was forecasting just $135 million in revenue, so the actual results came in slightly ahead of internal expectations.

Adjusted gross margin expanded to 22.6%, and ChargePoint reported an adjusted net loss of $33.6 million in the fiscal fourth quarter. Adjusted net loss for fiscal 2021 was $117.8 million. At the end of the fiscal year, which closed at the end of January, ChargePoint had cash reserves of $145 million. After closing the merger with the SPAC, which included around $317 million in cash in trust and a $225 million PIPE (private investment in public equity) before factoring in transaction fees, the company now has $615 million in cash that it can use to fund future growth.

Guidance for fiscal 2022 calls for revenue of $195 million to $205 million, roughly in line with the previous outlook of $198 million. Revenue is expected to dip in the fiscal first quarter to a range of $35 million to $40 million due in part to seasonal factors.

"In 2020, we continued to strengthen our market leadership position and expect our growth to be fueled by dozens of new EV models anticipated in 2021 across a wide range of segments and price points," CEO Pasquale Romano commented in a release. "With a strong balance sheet and a capital light business model, ChargePoint is well positioned to create shareholder value through broad attachment to the electrification of mobility for fleet and consumer vehicle markets."

The results themselves were mostly comparable to expectations, but investors may also be bracing themselves for dilution. ChargePoint has now registered to issue an additional 25.3 million shares related to the exercise of various warrants, which are often distributed to SPAC investors as perks to incentivize them to invest. There are currently 277.8 million shares outstanding prior to the exercise of the warrants, which will rise to 303 million after those derivatives are exercised, translating into roughly 9% dilution.

The upside is that ChargePoint will also directly raise more cash from the eventual exercise of the warrants, further strengthening its balance sheet and giving it more cash to invest in the business.

A long-term play on EV charging

It's going to take a while for the ChargePoint thesis to play out. The company utilizes a capital-light model where site hosts cover most of the installation costs of EV charging stations while ChargePoint enjoys a 100% attach rate to software subscriptions. Tech investors love recurring revenue, but it's going to take time for the network to grow and for subscription revenue, which is far more profitable, to really ramp up.

Over time, the idea is to grow the subscription business as a percentage of total sales, which will help drive operating leverage and gross margin expansion. GAAP gross margin is forecast to top 40% in 2024, compared to the 22.5% GAAP gross margin last fiscal year.

Now that the COVID-19 relief bill has been signed into law, the Biden administration and lawmakers may turn their attention to an EV infrastructure bill. The president hopes to build 500,000 EV charging stations across the U.S. in the years ahead. As the dominant Level 2 public charging network in America, ChargePoint would be a major beneficiary of any government support.

Why ChargePoint, Fisker, and QuantumScape All Dropped This Week

Why ChargePoint Is My Favorite EV Charging Stock Right Now