Shares of special purpose acquisition company (SPAC) One (AONE) jumped more than 12% in early trading Monday morning and are hanging onto about half of their gains as of 12:20 p.m. EDT -- up 6.3%.

If you're not certain about what exactly One is, that's not surprising. It is a bit confusing, so let me unpack this for you. The stock ticker "AONE" used to belong to rechargeable car-battery maker A123 Systems, but A123 was acquired by China's Wanxiang Group back in 2013. (Certain assets were later sold to China's Lithium Werks in 2018.)

AONE is now the ticker for One, a San Francisco-based SPAC that announced last month that it will acquire 3D printer maker Markforged, maker of "The Digital Forge" additive manufacturing machines. These machines print objects using carbon fiber reinforced composites or metal filament materials. One hopes to bring Markforged public in a reverse merger IPO with an "equity value of approximately $2.1 billion with approximately $400 million in net cash" sometime "in the summer of 2021." (Translation: The stock should have a market capitalization of $2.5 billion of which $400 million will be backed up with cash.)

When that happens, Markforged will trade publicly on the NYSE under the ticker symbol MKFG, and the troublesome ticker "AONE" will once again be abandoned. 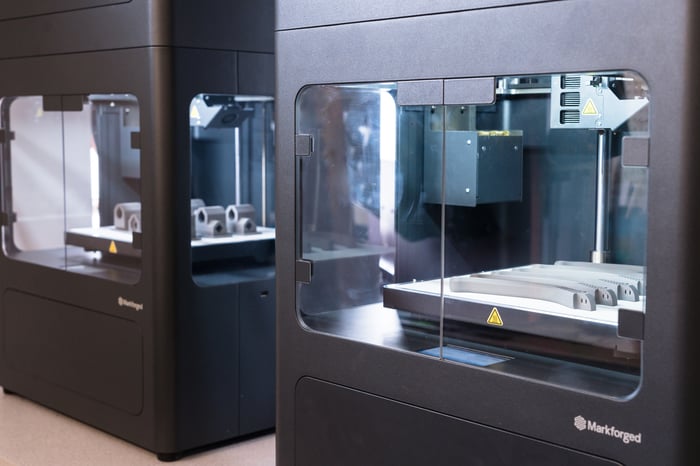 Well and good. But if One announced its SPAC transaction last month, and the transaction won't close for another three or four months, why is One stock moving today?

It's not always easy to understand what makes stocks go up and down, especially when dealing with volatile SPAC stocks. In this case, investors appear to be reacting to an earnings report out this morning from a competing 3D printer maker and SPAC IPO, Desktop Metal (DM 4.18%). Desktop reported that it lost $0.57 per share in the fourth quarter of 2020, a smaller loss than it suffered one year ago despite sales that shrank 38% year over year.

That sounds like pretty bad news to me. (Analysts think so, too. Sales at Desktop Metal grew only to $8.4 million in Q4, below the consensus expectation for $9.3 million.) Nevertheless, Desktop Metal stock is up more than 2% in afternoon trading, and shares of soon-to-be 3D printer maker One are following it higher.