Please ensure Javascript is enabled for purposes of website accessibility
Log In Help Join The Motley Fool
Free Article Join Over 1 Million Premium Members And Get More In-Depth Stock Guidance and Research
By Brent Nyitray, CFA - Mar 16, 2021 at 10:02AM

So far, the fears of a mass exodus from office space have not panned out. That's great news for office REITs.

A big investment theme right now is the reflation trade, which focuses on investing in some of the stocks that were beaten up during the COVID-19 shutdowns. As a result, we have seen some stock outperformance lately among retailers and some of the associated real estate investment trusts (REITs).

Office REITs have been regaining lost ground, especially Kilroy Realty (KRC 2.16%), whose stock price is up 20% since the beginning of the year. How safe is Kilroy, and its dividend, as an investment right now? 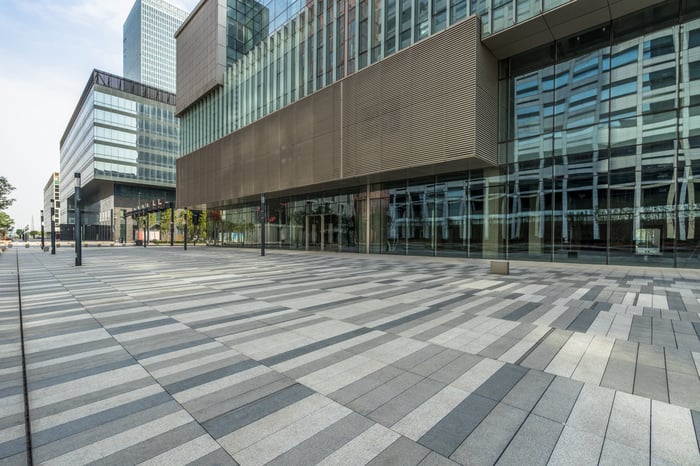 A focus on the West Coast

Kilroy is an office REIT that concentrates its portfolio in West Coast urban areas, including San Diego, Los Angeles, the San Francisco Bay Area, and Seattle. Its clients tend to be tech companies, but Kilroy also has a large presence in life sciences.

It specializes in the highest quality buildings with the most amenities (called Class A properties), which command the highest rents. At the end of 2020, Kilroy owned 14.6 million square feet of office space that was 91.2% occupied and 94.3% leased. Kilroy does own some residential buildings in Los Angeles, and there are ancillary retail spaces in its office buildings.

Employees like working from home more than their bosses do

Office REITs have been dogged by fears that the work-from-home experiment during the pandemic has been so successful that companies will simply accept this as the new normal and reduce their demand for centralized urban office space. But while employees have been huge fans of working from home, upper management has been less enthusiastic. Most office REITs have said on their earnings calls that their tenants are looking forward to having everyone back at the office.

The fear that office property demand is in a long-term downturn has yet to be seen in actual prices. Kilroy just sold a property in San Francisco for $1,440 per square foot, which is a record for the city's commercial real estate market. Kilroy started this property in 2015 and leased the whole thing to Dropbox in 2017. The total development cost was $585 million, or $780 per square foot. This is an 85% price increase in just over a few years.

Kilroy's tenants have been the least affected by COVID-19, as tech companies are naturally suited to working from home. Life sciences businesses are less adaptable to the work-from-home model. Last year, the company collected 98.5% of its gross rental billings in offices, 92.5% of its rental billings, and 58.6% for the retail properties. Kilroy's overall collection percent was 96.9% for the full year.

The balance sheet and payout are quite conservative

Kilroy's balance sheet is relatively unlevered for a REIT. The company has $10 billion in assets supported by $4.7 billion in long-term debt and $5 billion in equity. It has no debt maturities until 2023. Last year, Kilroy earned $433 million in funds from operations (FFO), which is the best way to look at earnings for a REIT. This is because noncash charges like depreciation and amortization have an outsize effect on net income. That $433 million in FFO easily covers the roughly $70.7 million in interest expense.

Kilroy pays a quarterly dividend of $2 per share. Based on FFO per share of $3.81, it is paying out just over half of its FFO as a dividend and is using the rest for growth capital. REITs generally have payout ratios in the 70% to 80% range, so Kilroy has quite a bit of breathing room if we have another downturn.

Despite the dour state of the economy last spring, Kilroy hiked its quarterly per-share dividend from $0.485 to $0.50. If it was able to manage a dividend hike last spring when many REITs were cutting theirs, it shows that the company is quite solid and should be a good choice for income investors who like to see some growth as well.

Will a Return to Work Help This Real Estate Specialist?