Please ensure Javascript is enabled for purposes of website accessibility
Log In Help Join The Motley Fool
Free Article Join Over 1 Million Premium Members And Get More In-Depth Stock Guidance and Research
By Adria Cimino - Mar 17, 2021 at 6:00AM

It's fair to say AstraZeneca (AZN 0.24%) is a major player in the coronavirus vaccine market. More than 50 countries have authorized its vaccine. But in recent weeks, woes have been multiplying. First came reports of low efficacy against the South African strain. Even worse, in recent days several European countries suspended use of the vaccine over safety concerts.

Meanwhile, AstraZeneca is collecting data from its phase 3 U.S. trial -- a clinical trial report and request for Emergency Use Authorization (EUA) in the U.S. should soon follow. Now, you may be wondering about the vaccine's chances in the U.S. market -- and if its problems in Europe will ease. And what will all of this mean for the stock? Here's what you need to know. 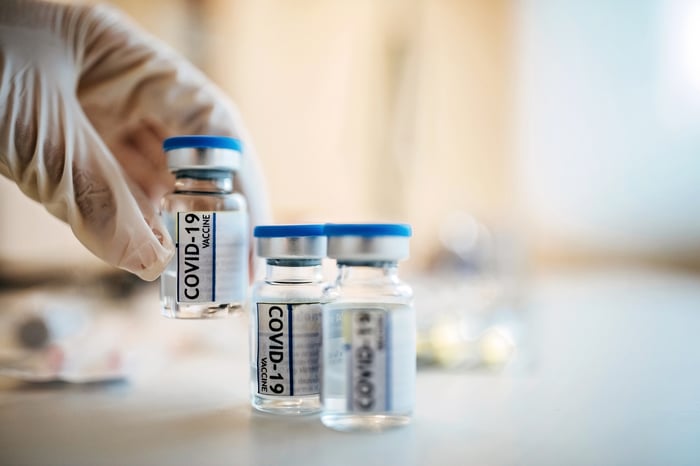 The World Health Organization and the European Medicines Agency (EMA) say there isn't evidence linking the problem to the vaccine. However, the EMA will meet with experts on Thursday to review data and draw conclusions.

There have been 15 occurrences of deep vein thrombosis and 22 occasions of pulmonary embolism in vaccinated individuals -- that's among the 17 million people across the European Union and the U.K. who have received the AstraZeneca vaccine. AstraZeneca says this rate is actually lower than what is found in the general population. "Hundreds" of cases would be expected in a group of this size, AstraZeneca said. And the company said that, in its clinical trials, thrombotic events were actually lower in the vaccinated group than in the placebo group.

Now, let's take a look at the earlier negative news. Researchers at the University of Oxford -- the developer of the vaccine -- found the vaccine provides "minimal protection" against the South African strain. This is in mild-to-moderate cases. The Oxford researchers now are working on an updated version of the vaccine that may better handle the variant.

As these two situations play out, AstraZeneca is concluding its phase 3 trial in the U.S. In fact, head of research Mene Pangalos back in February said trial results would be ready in four to six weeks, according to a Reuters report. That means we should expect data any day now. And after that point, the company is likely to request an EUA in the United States.

The U.S. Food and Drug Administration so far has authorized three coronavirus vaccines -- from Moderna, Pfizer, and Johnson & Johnson. Each time, it has given the nod quickly -- in a matter of weeks. If all goes smoothly, an AstraZeneca vaccine could be on the market in the second quarter.

Here's an important point to remember: AstraZeneca isn't selling its vaccine for a profit during the pandemic. So, any suspensions in vaccine use won't hurt the company's profit this year. However, the vaccine represents an earnings opportunity down the road. AstraZeneca probably will raise prices and take a profit after the pandemic. And it is ramping up capacity to three billion doses annually. This means AstraZeneca has the infrastructure needed to become a market leader. If AstraZeneca's vaccine problems are resolved, the product could contribute billions to revenue down the road.

You may have noticed that AstraZeneca's shares haven't reacted much to its vaccine news. Since April 30, the day it entered the vaccine race, the stock has slipped about 6%. And since the first European country suspended vaccine use on March 11, the shares are little changed. Overall, the stock hasn't been known for big one-year gains. Instead, investors have won over the long term. AstraZeneca shares have climbed 75% over the past five years, for example.

Here's why big pharmaceutical companies like AstraZeneca haven't been sensitive to coronavirus vaccine news: They won't rely on vaccine sales alone for growth. AstraZeneca sells a vast array of products, including eight blockbusters. And product sales rose 10% to more than $25 billion in 2020 year over year.

This means the latest news on AstraZeneca's vaccine probably isn't a reason for alarm. AstraZeneca's overall portfolio of products should drive profit higher in the years to come. And if AstraZeneca's stock market track record is a guide, long-term investors will benefit.