Please ensure Javascript is enabled for purposes of website accessibility
Log In Help Join The Motley Fool
Free Article Join Over 1 Million Premium Members And Get More In-Depth Stock Guidance and Research
By Keith Speights - Mar 18, 2021 at 6:04AM

Your extra cash from Uncle Sam should make you a lot more money if it's invested in these great stocks.

You can probably think of dozens of ways to use the $1,400 stimulus payment that's on the way to most Americans. If you don't have enough cash to pay your bills or don't have an emergency fund set up, those items should be at the top of your list.

But many Americans have those important bases covered and are looking for the best way to make money with their extra cash from Uncle Sam. If you're in that group and have your stimulus check already, buying these three stocks would be a brilliant move to make. 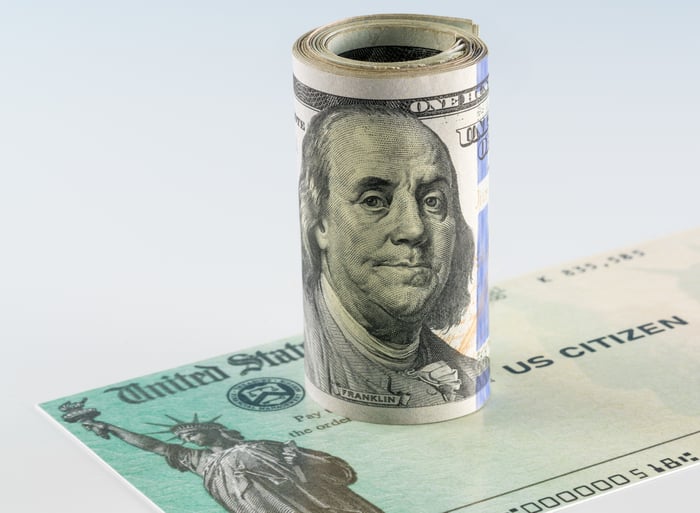 Investing in marijuana stocks might seem like a crazy way to use your $1,400. And for many cannabis stocks, it would be. I think, though, that buying shares of Cresco Labs (CRLBF -0.89%) would be a crazy smart decision.

For one thing, Cresco is already profitable -- unlike most cannabis companies. It's also generating impressive revenue growth, with sales skyrocketing 63% quarter over quarter in Q3. I expect another great update when Cresco announces its Q4 results next week.

Cresco's valuation also looks really attractive compared to its peers. The stock trades at a much lower price-to-sales multiple than other top U.S. multistate cannabis operators.

The COVID-19 pandemic hurt a lot of companies. But it only added fuel to the fire for PayPal Holdings (PYPL 2.70%). Coronavirus-related lockdowns spurred increased online shopping, causing PayPal's revenue to soar in 2020.

Some might worry that as the pandemic nears an end, PayPal's business could suffer. I don't. My view is that the company will continue to enjoy solid growth in e-commerce. I also expect PayPal will pick up accelerating momentum as brick-and-mortar retailers support its QR code functionality.

Even better, PayPal's Venmo digital wallet app keeps getting better and better while attracting more users. The company recently launched a Venmo credit card. In the second quarter of this year, PayPal is rolling out its "Pay with Venmo" feature that supports what the company calls "a best-in-class checkout experience" for in-store purchases.

PayPal is also acquiring Curv, an Israel-based digital-asset security provider. This deal will bolster the company's cryptocurrency capabilities. My prediction is that cryptocurrency will become a significant growth driver for PayPal over the next few years.

The Trade Desk (TTD 4.71%) belonged to the large group of companies that felt the sting of the pandemic last year. The company, which provides a software platform that enables advertisers to quickly and easily buy digital ads, experienced a slowdown as advertisers cut back on their marketing spending.

More recently, The Trade Desk's shares took a nosedive after Alphabet's Google subsidiary announced plans to eliminate ad-tracking cookies. This move would limit the amount of data that companies like The Trade Desk can capture, and potentially make their services less attractive to advertisers.

So why consider investing in The Trade Desk? Even with the pandemic, advertising spending on the company's platform reached record levels last year. Investors shouldn't worry about Google's move, either. The Trade Desk anticipated that cookies would go away sooner or later. It even launched an alternative to cookies, the Unified ID, in 2018.

Arguably the most important reason to buy The Trade Desk, though, is the explosion in connected TV (CTV) -- television connected to the internet. CTV is transforming the advertising industry. And cookies are irrelevant since CTV doesn't rely on browsers.

I think that The Trade Desk remains in a terrific position to profit from the CTV boom. Using your stimulus check to buy shares of this stock should pay off big time over the next few years.