Please ensure Javascript is enabled for purposes of website accessibility
Log In Help Join The Motley Fool
Free Article Join Over 1 Million Premium Members And Get More In-Depth Stock Guidance and Research
By Jennifer Saibil - Mar 18, 2021 at 7:56AM

The struggling theater operator still has some life left, but that doesn't necessarily make it a good investment.

AMC Entertainment Holdings (AMC -2.66%), the world's largest theater operator, was one the pandemic's biggest losers. Not only were theaters completely closed for five months, but even after the company reopened locations all over the country, movie studios have found new outlets for feature film releases through their streaming services.

But AMC is fighting to stay afloat, and it has raised over $2 billion of financing in the past year. Bullish investors (including Reddit users) pushed the stock as much as ten times higher over the past two months, from a low of less than $2 per share in January. Is it too late to get in on the recovery, or should you stay away from this hot potato? 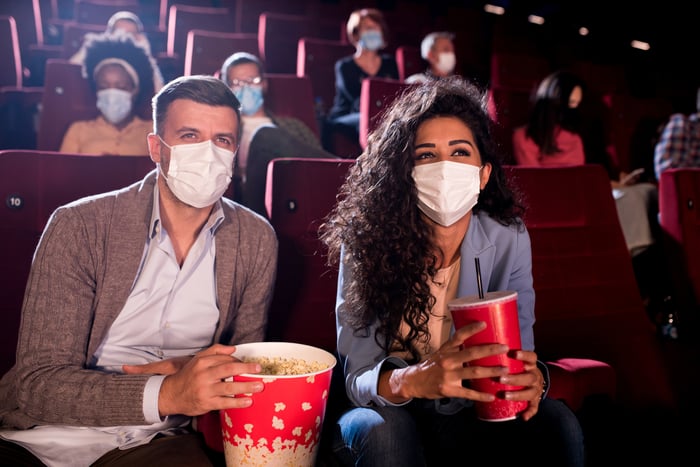 A leader in a dying industry?

AMC owns over 1,000 theaters globally, and it was a $5.5 billion annual business before the pandemic shut down the industry.

But last year, revenue came in at just $1.24 billion, a 77% year-over-year decline. Fourth-quarter sales of $162.5 million were down 89% from the year-ago period. The company burned through $124 million of cash monthly in the fourth quarter, which was in line with management's expectations. CFO Sean Goodman said the latest results are largely "irrelevant," because the company wasn't expecting much better, and the focus is on where the company goes from here.

AMC has 90% of U.S. theaters open for business as of March 5, which the company says is a much higher percentage than its competitors. CEO Adam Aron noted the company raised $2.2 billion of cash in the past year and is in good financial shape moving forward as theaters continue to reopen, with two prime markets -- New York and Los Angeles -- ready to welcome moviegoers.

Larger than the problem of closed theaters, which can be remedied as vaccines make their way through the country, is the very real possibility that consumers may never return to theaters in the same numbers. Industries such as cruise lines are holding out for an eventual return to normal operating conditions, but that's a service with few alternatives. For movie buffs, there are now more options than ever.

In a surprise move in December, AT&T's Warner Bros. announced that it would release its entire 2021 movie lineup on HBO Max at the same time those films debut in theaters, beginning with Wonder Woman 1984.

Streaming came to Walt Disney's rescue during a time when theme parks were closed, and the company reorganized to make its Disney+ service and other streaming offerings a central part of the business. It has already released Mulan and Hamilton straight to Disney+, and the newest film debut, Raya and the Last Dragon, streamed simultaneously with the theater release.

This doesn't mean that movie theaters are a lost cause. Aron estimated there are 40 films originally slated for a 2020 release that will land in theaters starting in May 2021, and internal surveys showed pent-up demand for theater outings. The company also started a new venture allowing customers to rent auditoriums for private events, and AMC has hosted 115,000 of these private showings so far.

Is it worth buying the stock now?

I mentioned earlier that shares of AMC have been moving higher since January (though not in a straight line). Beyond its share price, the theater operator still has a shot at building some much-needed positive momentum in 2021. But the situation remains incredibly volatile and with the stock up over 400% in the past year on just one-quarter the sales, I wouldn't buy in at this time.