A large shareholder is cutting its stake in the electric-vehicle maker.

Shares of electric-vehicle (EV) start-up Nikola (NKLA -7.96%) dropped Thursday after the company disclosed that a large shareholder will be cutting its stake. As of 1:30 p.m. EDT, the stock was down about 8%.

In an SEC filing, Nikola revealed that South Korea's Hanwha Corp. will be reducing its stake in the EV company by about half. Through its Green Nikola Holdings subsidiary, Hanwha has an approximately 5.6% stake in Nikola, with more than 22 million shares. The company plans to sell slightly over 11 million of those shares. 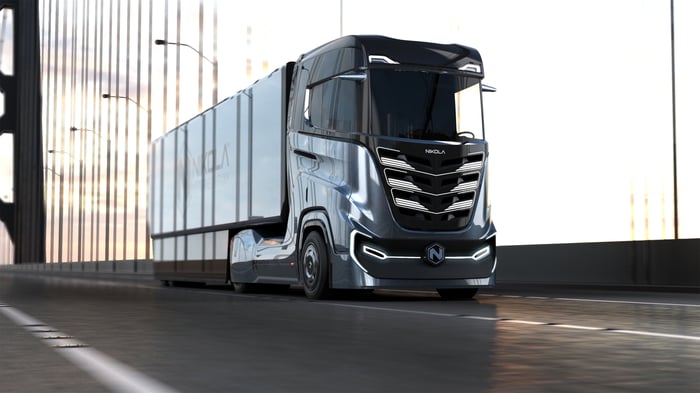 The shares won't necessarily be sold right away. The plan will expire at the end of 2021, unless the shares are sold prior to that deadline. The reduction in ownership is also not the end of the relationship between Nikola and Hanwha. According to Reuters, "A Hanwha Group spokesperson said it will use the proceeds to invest in hydrogen-related businesses, adding that the potential sales is not an end of cooperation with Nikola."

Nikola has also been raising new capital recently. It filed to sell shares to raise $100 million earlier this month. Nikola is in the process of commissioning prototype vehicles at its Arizona manufacturing plant. The company said in a separate SEC filing that proceeds from its recently announced share sale may be used "to complete our Arizona manufacturing facility, develop commercial scale BEV and FCEV Class 8 trucks and develop hydrogen station infrastructure."