Please ensure Javascript is enabled for purposes of website accessibility
Log In Help Join The Motley Fool
Free Article Join Over 1 Million Premium Members And Get More In-Depth Stock Guidance and Research
By Jeremy Bowman - Mar 19, 2021 at 8:45AM

Believe it or not, the tech giants are starting to look cheap compared to the rest of the market.

If you're looking for signs of a market bubble, there are plenty to be found.

There's the mania over non-fungible tokens (NFTs). Bitcoin (CRYPTO: BTC) is flirting with all-time highs, and Reddit meme stocks like GameStop have surged once again, approaching their highs from the boom back in January.

Meanwhile, enthusiasm over the economic recovery has washed over the market, pushing the S&P 500 to an all-time high, nearly doubling from a year ago. 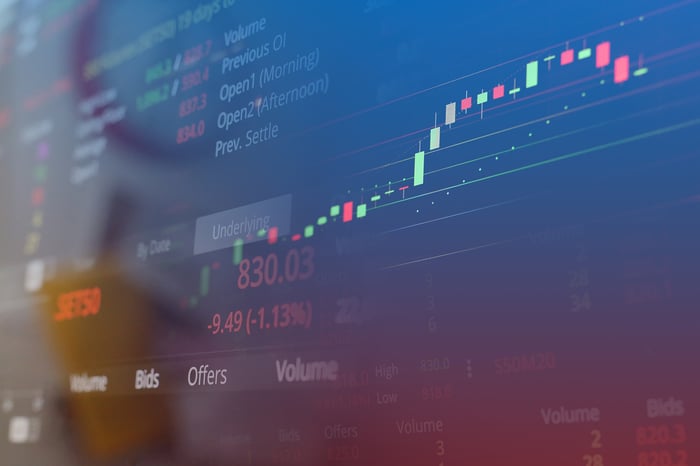 Both pandemic winners like Wayfair and Etsy and recovery plays in the energy and financial sectors seem to be thriving, but one surprising sector is getting left behind. FAANG stocks, which surged in the initial months of the pandemic, have underperformed the S&P 500 over the last six months. As the chart below shows, only Alphabet (GOOG 2.15%)(GOOGL 2.37%) has outperformed the broad market during that time. 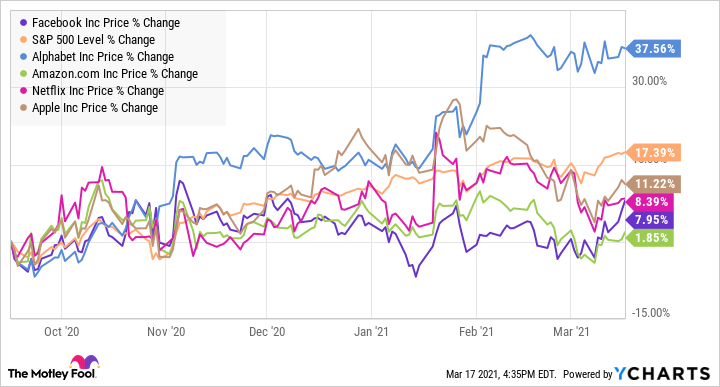 What gives? Investors seem to be shifting their focus away from the tried-and-true big-tech sector toward recovery plays in areas like travel, entertainment, energy, and financials. But many of these stocks are already trading above pre-pandemic levels. Booking Holdings, the world's largest online travel agency, is up 20% since the start of 2020, despite its revenue plunging during the pandemic. Meanwhile, concert promoter Live Nation Entertainment is up 21% even as live events have all but evaporated during the crisis.

With both those stocks and popular pandemic winners in cloud computing and e-commerce trading at unusually high valuations, FAANG stocks seem to present one of the few value opportunities on the market. Let's look at a few of the most appealing stocks in the group.

While emerging e-commerce winners like Shopify, Sea Limited, and Etsy have gotten much of the attention in the online retail segment, Amazon (AMZN -0.03%) remains the clear leader.

The company added more than $100 billion in revenue last year, posting 38% growth in 2020. Amazon stock gained early in the crisis as it was a clear winner from the pandemic, but shares have cooled off more recently, trading flat over the last eight months. That's in spite of the company shredding earnings estimates in the last three quarters. Combined during that period, Amazon reported $36.49 in earnings per share compared to estimates of $16.10. Still, Wall Street has shrugged off the blowout numbers, and analysts are only expecting modest earnings growth this year.

That seems like a mistake. Amazon's profits nearly doubled last year because its high-margin businesses like cloud computing, its third-party marketplace, and advertising are growing faster than its core first-party e-commerce business, and profit margins are ramping up as they grow.

While the stock still looks expensive at a price-to-earnings ratio of 75, Amazon has reached a tipping point as profit margins should continue to expand thanks to its core competitive advantages like the scale of its e-commerce business and the popularity of its Amazon Prime loyalty program.

The pandemic has led to a bonanza in streaming with a number of new services launching over the past year. Among the many winners lately are newbies like Discovery Communications and ViacomCBS, which have seen their shares triple over the last six months after launching their own services.

While Netflix (NFLX 0.58%) might have plenty of new company in streaming, it remains the undisputed king of over-the-top programming, and capped off 2020 by adding 36 million paying subscribers.

Netflix also just flexed its muscles in the Oscars race, garnering 35 nominations, more than any Hollywood studio or streamer as its dramedy Mank, about the screenwriter for Citizen Kane, received 10 nominations. That shows Netflix is establishing itself as the leader not just in streaming, but in the broader entertainment industry. Its Oscars lead is important also because film has traditionally lagged behind television at Netflix, but the nominations haul shows the company is succeeding in producing critically acclaimed movies.

Like Amazon, Netflix is also ramping up profit margins, gaining leverage from its subscriber base of more than 200 million members and its heavy investments in content. Netflix's operating margin improved from 13% in 2019 to 18% in 2020, and it's targeting a 20% operating margin for 2021. That shows the company is becoming a profit machine.

While it's true Netflix is facing increasing competition in streaming, that also adds momentum to cord-cutting, freeing up more cable subscribers around the world to join Netflix.

Facebook (FB 1.39%) has one of the strongest businesses on the planet. The company provides popular platforms built on user-generated content that it uses to sell targeted ads. It's a relatively simple concept, and it has generated huge margins for the company over its history. In 2020, its operating margin was 38% even with pandemic-related headwinds in advertising during the lockdown.

Facebook is the cheapest of the FAANG stocks, at a P/E ratio of 28, a discount to the S&P 500 -- but also has the highest profit margins, an odd combination.

The company faces a litany of complaints from detractors, including concerns about Apple's (AAPL 4.01%) crackdown on protecting privacy, Facebook's monopolistic power, and its sometimes negative influence on democracy by serving as a message board for hate speech and violent threats.

Many of the criticisms are legitimate, but so many people use Facebook's apps, including Instagram and WhatsApp, and so many businesses rely on Facebook properties to reach customers, that this behavior isn't going to change easily. The company is very good at what it does, and there are few good alternatives. Facebook has nearly 3 billion users, giving it an unmatched degree of network effects in social media as well as a huge audience for businesses.

Those kind of assets form a significant competitive advantage, and they aren't going to be unwound without a monumental antitrust case. Meanwhile, the company continues to grow briskly, increasing revenue by 33% year over year in the fourth quarter, much faster growth than similarly priced stocks. While its growth will moderate as it gets bigger, digital advertising still has a much better future than Facebook's valuation would indicate.