Please ensure Javascript is enabled for purposes of website accessibility
Log In Help Join The Motley Fool
Free Article Join Over 1 Million Premium Members And Get More In-Depth Stock Guidance and Research
By Rick Munarriz - Mar 20, 2021 at 10:15AM

Blowout quarterly results in the coming days can turn these out-of-favor stocks into market darlings again.

Volatility is in the air, and that's not necessarily a bad thing. A lot of stocks are on the move these days, but not every name is rising. Earnings season has whittled down to the point where it's now just dozens of companies -- instead of hundreds -- reporting in any given week. But strong financials could be the catalyst to breathe new life into some investments.

Adobe (ADBE 4.80%), Vital Farms (VITL 0.40%), and Momo (MOMO 2.60%) are three stocks that have plenty to prove in the week ahead. They will all provide financial updates, and strong performances could make them pop again. 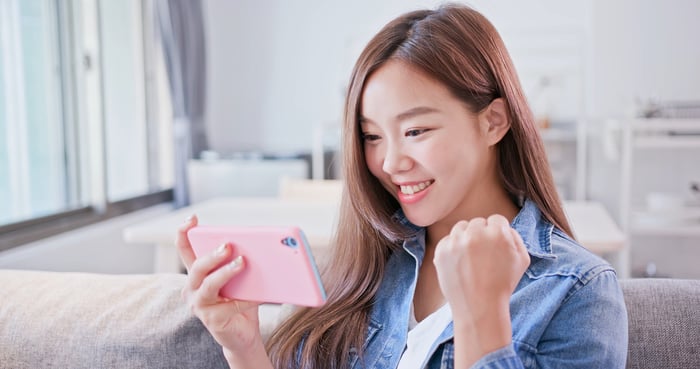 The one household name on this list is making the cut because the shares enter the new week trading 18% below the all-time highs hit back in early September of last year. Adobe is the publishing-software giant behind many iconic platforms, and it reports fresh financials for its fiscal first quarter on Tuesday afternoon. It's not going to need to fire up Photoshop to make the numbers look good.

Adobe's growing a lot faster than you probably think for a decades-old software company. It rattled off five consecutive years of 20% or better top-line growth before proving mortal in fiscal 2020 with a still-respectable 15% increase. Analysts see it getting back on track with a 22% year-over-year increase in Tuesday's report.

Wall Street pros see earnings per share also rising by 22% for the fiscal quarter, which ended in February, but here is where the story gets even better. Adobe has routinely landed above market expectations. It beat Wall Street profit targets in all four fiscal quarters of 2020, and that was during an off year for the company. If Adobe stock was bumping up against last year's highs, it would need a strong quarter to hold its gains, but the stage is set for a big move up if it comes through with another beat and somewhat rosy near-term outlook.

Investors hoping to get in on the humane farming trend bid up shares of Vital Farms when it went public at $22 last summer. The ethically produced food company -- partnering with roughly 200 family owned farms putting out eggs and butter products through more than 13,000 stores -- was a hot IPO.

Vital Farms opened at $35, flirting with highs in the low $40s in each of its first three months of trading. It has given back most of its post-IPO gains, closing at $26.60 on Friday.

Some debutantes stumble out of the gate, but growth hasn't been an issue here. Vital Farms hit the market after posting 32% revenue growth in 2019, rising to 44% in the first quarter of last year. It has come through with increases of 84% and 57% in its first two reports as a public company. The pasture-raised eggs specialist can hatch a recovery in its stock (see what I did there?) with a strong financial update on Wednesday morning.

On Thursday, Momo gets a chance to woo back investors with its fourth-quarter results after the market close. The Chinese company behind its namesake social-search platform and its Tinder-like Tantan dating app has fallen on hard times lately.

Momo's revenue went from nearly quadrupling in 2016 to more than doubling in 2017, and the deceleration has degenerated to the point where revenue declined 9% through the first nine months of last year.

You can't just write this off as pandemic weakness. Online dating and social discovery continue to be a growth story outside of Momo. Tinder parent Match Group (MTCH 2.52%) and recent IPO Bumble (BMBL 1.05%) grew their top lines by 17% and 19%, respectively, in 2020. But you have to like Momo as a value stock with growth turnaround potential.

Match Group and Bumble trade at an enterprise value that is 14 to 18 times trailing revenue. Momo, with its cash-rich balance sheet, is fetching less than its trailing revenue. It's also very profitable right now with an earnings multiple in the single digits.

Did I mention that it's also yielding nearly 5%? Momo has declared an annual dividend with is fourth-quarter financials in back-to-back years. As rough as 2020 may have been, the company is still profitable and still has ample cash to announce another beefy payout on Thursday. Momo is so out of favor that even a whiff of a turnaround can send the shares rallying on Friday.

4 Big Stocks to Watch in March

Here's How to Profit From Blockbuster Holiday Sales