The GEO Group's share price has tumbled over the past 12 months, and it may have further to fall.

Real estate investment trusts (REITs) are known for their high-yield dividends, and The GEO Group (GEO 1.29%) is no exception. The company, which owns and manages 123 private domestic secure facilities and post-correctional residential facilities with 93,000 total beds in the United States, Australia, Africa, and the United Kingdom, offers a dividend with an annualized payout of $1 a share. At the company's current share price, that gives it a yield of around 12.6%.

That might sound great ... until you find out why the yield is so high. GEO Group's stock price has fallen by more than 32% in the last year, so despite payout cuts this year and last year, the yield remains high. I'm not that worried about the safety of GEO's dividend, but the company appears to be a classic dividend trap because its revenues are trending downward. 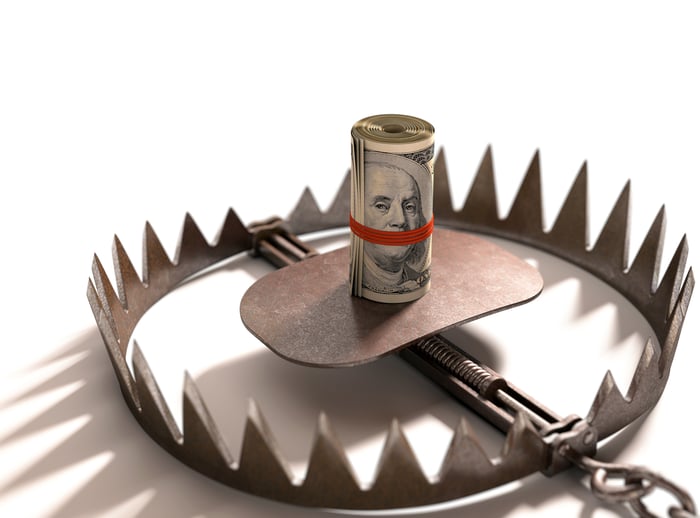 The hits keep on coming

Last year was difficult for companies that operate private prisons. The COVID-19 pandemic meant extra costs to make prisons and immigrant detention centers safer for workers, inmates, and detainees. It also led to a drop in inmate populations.

According to The Marshall Project, the number of people incarcerated in the U.S. fell from 1.3 million in March to 1.2 million by June. Prisons, in an effort to avoid bringing the coronavirus into their populations, stopped accepting new prisoners. Court closures meant fewer people were being sentenced, and parole officers were less active and sent fewer people back to prison for parole violations.

On top of that, with the change of government in Washington, this isn't the best of times to be in the private prison business. On Jan. 26, President Biden signed an executive order directing the Justice Department not to renew its contracts with private prison operators.

The order applies to any private facilities connected with the Bureau of Prisons and the U.S. Marshals Service. It doesn't yet apply to all agencies. Immigration and Customs Enforcement, for example, has contracts with private companies, including the GEO Group, to detain undocumented immigrants.

Looking at a recent investor presentation by the company, it's easy to see that the eventual result of Biden's policy could be a 27% cut to GEO Group's revenue. In March, GEO learned that the Marshals Service would not renew its contract for the company's 222-bed Queens Detention Facility in New York. The facility generated $19 million annually in revenues, the company said.

The dividend may be safe, but the share price not so much

You have to give GEO credit for doing the smart thing, trimming its quarterly dividend 29.2% to 34 cents a share last year and then again by 26.5% to 25 cents a share this year.

While the cuts are concerning, the dividend appears well covered by the company's expected adjusted funds from operations (FFO) this year, which management said should be in the range of $1.98 per share to $2.08 per share.

GEO Group is fighting against trends

Unlike some REITs that were adversely affected during the global pandemic by tenants that had difficulty paying the rent, GEO's customers are government agencies that always pay the rent on time.

The difficulty GEO faces is that the population of prisoners in its facilities has been dropping, and that trend appears likely to continue. That means reduced revenue, which to investors means the stock's share price could continue to drop, and also increases the likelihood that the company could cut its dividend further.

To some degree, the future revenue declines may have already been priced into the stock, but as an investor, I don't see upside for GEO Group any time soon.

You Could Earn 6.5% Annually in Your IRA With These 5 Stocks