Please ensure Javascript is enabled for purposes of website accessibility
Log In Help Join The Motley Fool
Free Article Join Over 1 Million Premium Members And Get More In-Depth Stock Guidance and Research
By Keith Speights – Mar 24, 2021 at 5:00AM

The genomic analysis systems maker beat expectations and looks for a big jump in its installed base this year.

Warren Buffett's right-hand man, Charlie Munger, made waves recently by stating that the Robinhood trading platform "is a dirty way to make money." Investors of at least one popular Robinhood stock -- Bionano Genomics (BNGO -2.14%)-- might not bristle too much at Munger's comments simply because they've made so much money. Bionano's shares have soared nearly 188% so far this year.

That momentum could keep going after the company's fourth-quarter update following the market close on Tuesday. The healthcare stock jumped nearly 6% in after-hours trading. Here are the highlights from Bionano's Q4 update. 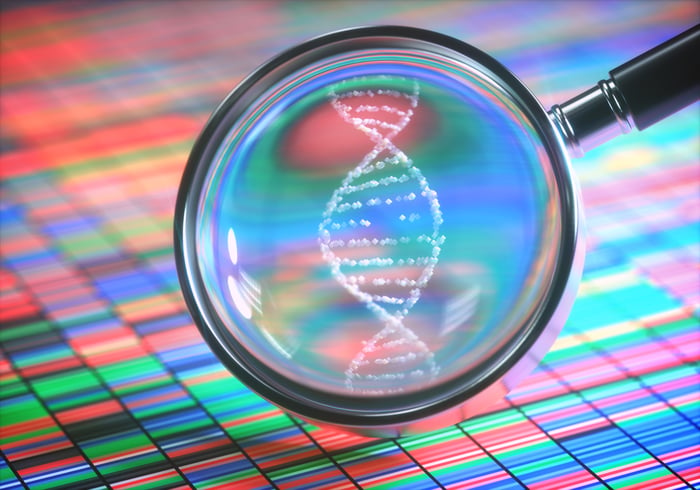 Bionano reported revenue in the fourth quarter of $4 million, a 43% increase from the prior-year period revenue total of $2.8 million. It also beat the consensus analysts revenue estimate of $3.5 million.

Bionano ended the fourth quarter with cash and cash equivalents of $38.4 million. At the end of 2019, the company's cash position stood at $17.3 million.

The most important story for Bionano in the fourth quarter was its acquisition of diagnostic services provider Lineagen. This deal closed in August, so Lineagen contributed to Bionano's financial performance throughout Q4.

Most of Bionano's year-over-year revenue growth in the fourth quarter stemmed from the addition of Lineagen, which generated close to $1.1 million in service revenue during the period. The acquisition also boosted Bionano's salary expense. Of the 49 staff members added throughout 2020, 33 came from Lineagen. These additional positions were the primary cause for Bionano's operating expense increasing $3.4 million year over year to $12.3 million.

Bionano also expanded the use of its Saphyr diagnostics system during the fourth quarter and throughout 2020. The company ended Q4 with an installed base of 97, up 24 from the end of 2019.

The company's cash position is in better shape than its Q4 results indicate. Since the beginning of this year, Bionano has raised around $335 million through two stock offerings. CFO Chris Stewart said that Bionano believes its cash stockpile "significantly de-risks the company, solidifies our financial future, and allows us to focus on the achievement of our long-term vision to disrupt genomics through the global adoption of Saphyr."

Bionano has a lot to look forward to in the next few quarters. It expects to obtain accreditation for Saphyr-based laboratory-developed tests for acute lymphocytic leukemia (ALL) and facioscapulohumeral muscular dystrophy (FSHD) in some European markets in Q2. The company plans a commercial release of prenatal assays and an expansion of the menu of its pediatric assays in Q3.

The fourth quarter of 2021 will be an especially busy one. Bionano anticipates the validation of three of its laboratory-developed tests with billing codes. It also expects to have a prototype of its next-generation high-throughput Saphyr system ready.

If all goes according to plan, Bionano will finish this year with a much larger installed base. The company projects that it will have 150 systems installed by the end of Q4 2021 -- a 50% jump from the end of 2020.