Please ensure Javascript is enabled for purposes of website accessibility
Log In Help Join The Motley Fool
Free Article Join Over 1 Million Premium Members And Get More In-Depth Stock Guidance and Research
By Jennifer Saibil - Updated Mar 25, 2021 at 11:59AM

Companies that have benefited during the pandemic and have the tools to continue their success are the most likely to keep winning as consumers spend more.

The U.S. government has just started to send out a third round of pandemic-related stimulus checks. Many Americans need this money to pay for basics like food and utilities; others who have more of a financial cushion might splurge on luxury goods. If you're an investor in the latter group -- and you've paid off your debts and set aside enough for an emergency fund -- you might be wondering how else you can benefit from the potential consumer windfall.

Companies that provide essentials are poised to gain when Americans spend their stimulus money, but so are some businesses that specialize in upscale products. In both cases, companies that have invested in digital technology and differentiated their goods and services are most likely to take a bigger piece of the pie now and in the future. Here are three examples if you suddenly find yourself with spare cash to invest. 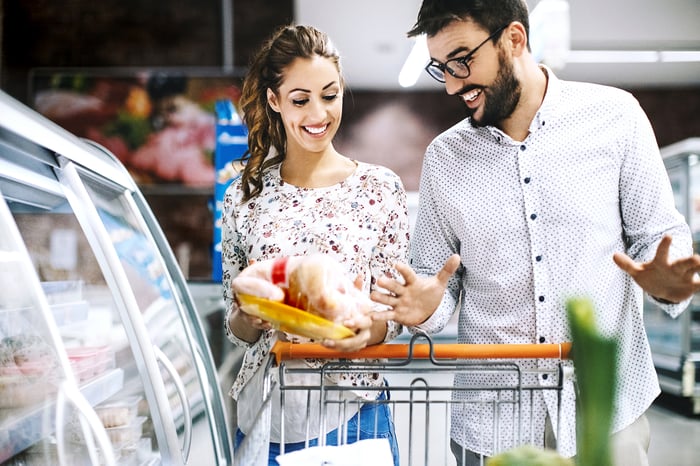 All the large retailers did well during the pandemic, as customers stocked up on home essentials. Walmart and Target had some of their best growth quarters ever, and so did Costco Wholesale (COST 5.65%). All of these companies should benefit from another round of stimulus checks, but I'm highlighting Costco because of its unique membership model.

Costco members pay $60 annually for a basic membership and $120 for an executive membership for the privilege of shopping in Costco's huge, low-priced warehouses. The company's retention rate, which measures how many members renew their memberships, consistently comes in at around 90%. When shoppers want to buy in bulk, they go to Costco.

Elevated sales numbers continued into the quarter ended Feb. 14, with a 15% sales increase and 76% e-commerce growth. Prior to the pandemic, 10% sales growth was a good quarter. That's with several departments that were still closed or not operating at full capacity, such as travel.

Costco also sells upscale and big-purchase products like jewelry and appliances, and customers who are able to use their stimulus checks for spending beyond basics may choose to take advantage of Costco's discounted prices on more expensive items.

The company has excellent long-term prospects, with only 558 domestic stores and 244 international stores. It opened 10 new warehouses in the first half of fiscal 2021, and it plans to open 13 more in the second half. It also pays a dividend that yields just 0.83% at Thursday's prices, but it has paid a special dividend every two or three years, most recently $10 in November.

When Costco members get their checks, the warehouse chain is a sure bet to get some of the cash. That's all the more reason to consider Costco as an investment. 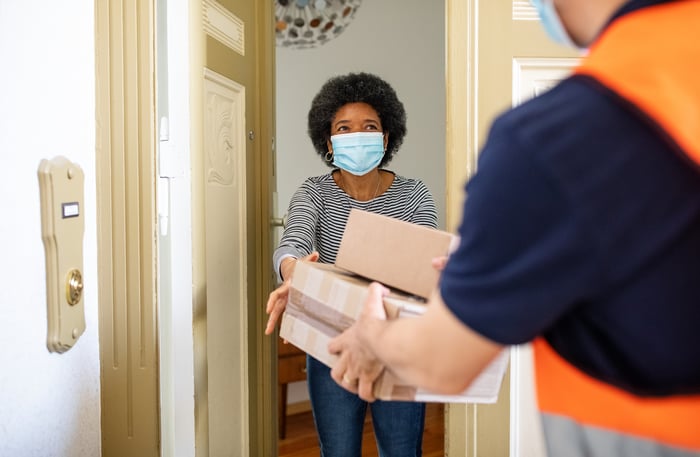 Amazon.com (AMZN 4.03%) got a huge sales boost from customers staying at home and choosing the king of e-commerce for their essentials. The company posted a 44% sales increase in the fourth quarter, beating its internal estimates even after many lockdowns were lifted. Full-year sales growth was 38%, as compared with 20% in 2019 and 31% in 2018.

As of January 2020, the last time outgoing CEO Jeff Bezos announced Prime membership, there were 150 million subscriptions, but in the fourth-quarter earnings call in early February, CFO Brian Olsavsky said there was "strong growth in new Prime member sign-ups." That's good, because Prime members tend to be more engaged and committed.

Even as people venture out again, the shift to online ordering is much more than a pandemic trend. Amazon has shortened delivery time from one day to several hours for some products and regions, making it even simpler to order and firming up its hold on U.S. e-commerce. It's also moving into new areas where customers can part with their stimulus checks, such as in-store grocery like Whole Foods as well as its new cashierless ventures, Amazon Go and Amazon Fresh.

At Thursday's prices, Amazon's stock has gained 62% over the past year, and there's every reason to feel confident in the company's future. 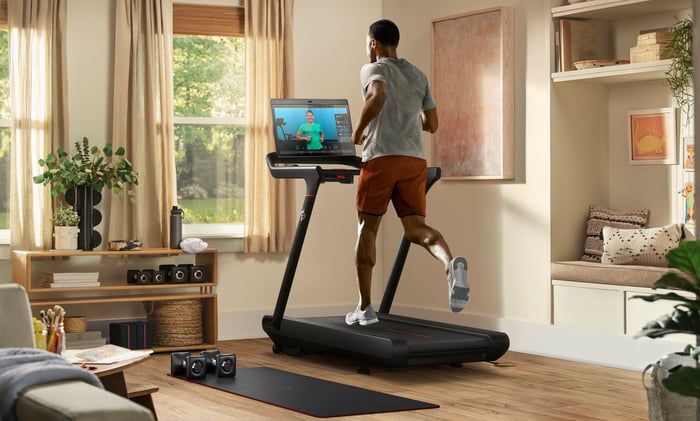 Americans at varying income levels are receiving this round of stimulus checks, and people who have the essentials covered will use the cash to stimulate the economy in other ways. Many fitness enthusiasts purchased a Peloton Interactive (PTON 6.51%) bike or treadmill over the past year when gyms were closed and they needed a home fitness alternative. As digital living becomes more prominent in many areas, such as shopping and remote work, Peloton is benefiting from digital, at-home fitness trends. Sales growth was still in the triple digits during the quarter ended Dec. 31, at 128%.

Not everyone can afford the equipment's high price tag, with the original bike starting at the new "low price" of $1,895. But as Peloton bikes become more mainstream and easier to purchase, the company's brand value will rise accordingly, in addition to greater sales and opportunities for future growth. The company recently announced it's expanding into Australia, and that was after a string of new ideas this year such as the acquisition of Precor, which makes commercial fitness equipment.

Peloton's stock has had an amazing run since it went public in late 2019, gaining about 300% since its first day of trading. It's now expanding into new markets, allowing more people to own some of its luxury equipment and fueling higher growth.