Please ensure Javascript is enabled for purposes of website accessibility
Log In Help Join The Motley Fool
Free Article Join Over 1 Million Premium Members And Get More In-Depth Stock Guidance and Research
By Eric Volkman - Updated Mar 26, 2021 at 9:12AM

The company has a pre-order in place for 100 of the vehicles.

Will Tesla Motors' (TSLA 5.14%) Semi soon be prowling the roads of the American West? PepsiCo (PEP -0.58%) intimated that possibility in an environmental impact update issued Thursday.

PepsiCo, best known as the entity behind the sugary drink but also a major snack food producer, said it would deploy 15 electric semi trucks later this year. It did not name the manufacturer, but since PepsiCo has a pre-order in place with Tesla to ultimately take delivery of 100 such vehicles, the widespread and sensible assumption is that they will be Semi models produced by the famous electric vehicle (EV) maker. 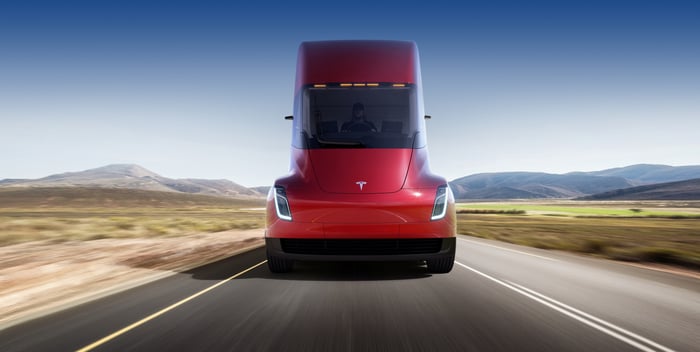 A rendering of a Tesla Semi. Image source: Tesla Motors.

PepsiCo and Tesla struck their deal in December 2017. It was a big "get" for Tesla, as PepsiCo was not only a prominent company, its commitment was also double the previous record pre-order of 50 Semis from food services provider Sysco.

Tesla's ambitions to manufacture a range of vehicle types feed into PepsiCo's goal of "greening" its truck fleet, as well as substantially reducing its overall carbon footprint. The drinks-and-snacks company is running a pilot program in one of its largest facilities, in Modesto, California. In the update Thursday, it wrote that it has managed to cut its greenhouse gas emissions from that location's fleet by 53% across the past year.

So far, neither Tesla nor its never-too-shy-to-brag CEO Elon Musk have publicly commented on PepsiCo's update.

Tesla took the wraps off the Semi in November, 2017. According to the company, it will be powered by four independent motors and feature a version of its Autopilot assisted-driving system. These will contribute to making it, as Tesla describes it, "the safest, most comfortable truck ever."