Please ensure Javascript is enabled for purposes of website accessibility
Log In Help Join The Motley Fool
Free Article Join Over 1 Million Premium Members And Get More In-Depth Stock Guidance and Research
By Alexander Carchidi - Mar 27, 2021 at 5:12AM

These cannabis stocks are extremely risky, but investors could still have high times if the right pieces fall into place.

Hopping into a frothy and evolving investment like a cannabis stock is one potential shortcut to becoming a millionaire. When you allocate funds into a rapidly growing industry, the chances of hitting it big are much larger than normal -- if you can tolerate the risk.

At the moment, the following three companies are closer to half-baked than they are to minting millionaires. Their market caps are small, and the majority of their growth is probably in the future. You shouldn't be betting your life savings on their success, at least not in their present form. Nonetheless, they just might have the inklings of greatness that could help a small investment supercharge a portfolio in the long run, potentially to the point of making millions for shareholders. 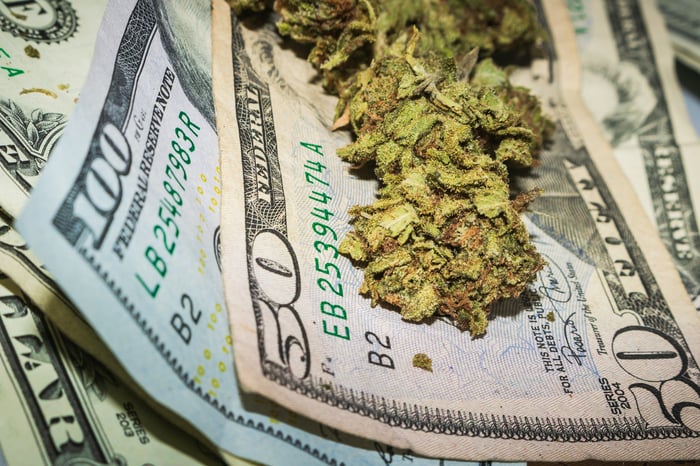 Jushi Holdings (JUSHF -1.65%) has most of the ingredients of a stock poised for a massive boom. First of all, its quarterly revenue has exploded by more than 6,400% since the start of 2019 thanks to its presence in key U.S. cannabis markets like Pennsylvania, where it operates 10 medicinal dispensaries. 2021 will see a massive scaling up of Jushi's facilities across the board. In Virginia, it plans to open five new dispensaries (an increase of 500%) through the end of next year, and other states will see similarly large openings proportionally.

With growth like that, it wouldn't be too surprising if revenue also shot up in a year or two. That would potentially give the stock the catalyst it needs to make shareholders rich, but profitability may be a drag for a while longer. Depending on the level of demand and the pace of marijuana legalization, a pivot to selling adult-use cannabis to a wider market could also be a tailwind. In the meantime, be sure to take a look at Jushi's full-year report for 2020, which should drop toward the end of April, to see what management is doing to stage the company for its future expansion.

The story of Curaleaf Holdings (CURLF 0.75%) is one of increasing sales volume and increasing efficiency. Since 2019, revenue has more than doubled, and adjusted earnings before interest, taxes, depreciation, and amortization (EBITDA) grew by 456%. Of equal importance is the fact that the company isn't a rinky-dink regional competitor where such impressive stats are unlikely to scale upward. Curaleaf has facilities in nearly half of U.S. states, and strong presences in core markets like Pennsylvania, New York, Massachusetts, and California.

It's also about to be active in the EU's medical cannabis markets, which could be the kindling it needs to power massive shareholder returns in the future. Earlier this month, it acquired a vertically integrated European cannabis company for $286 million in stock and a small portion of cash. Once the deal closes in the second quarter of this year, Curaleaf will have production and retail locations scattered all over the EU -- and that's going to drive revenue even more alongside expanding operations in the U.S. In the long run, the company could become one of the world's largest cannabis providers, which may well make investors rich. 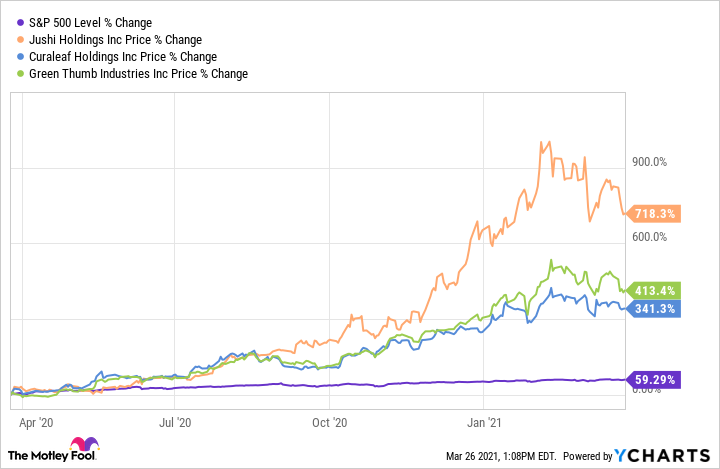 Like the other stocks I've discussed, Green Thumb Industries (GTBIF -0.95%) is in the enviable position of seeing its revenue and profits rising sharply at the same time. Its 2020 revenue increased by 157.2% to reach $556.6 million as a result of its efforts to expand into the U.S. market. To keep this revenue growth going, management has prioritized the rollout of new products to match consumer preferences, and by all indications it's working.

In the near future, Green Thumb plans to increase its retail holdings by more than double, and it already has the licenses it needs to move forward. That includes expansion into the largest U.S. state markets like -- yep, you guessed it -- Pennsylvania and New York. Moving forward, investors can expect the company to keep gobbling up smaller regional operators and opening new stores. If things keep going like they have been, Green Thumb could multiply in value over the next few years.