Please ensure Javascript is enabled for purposes of website accessibility
Log In Help Join The Motley Fool
Free Article Join Over 1 Million Premium Members And Get More In-Depth Stock Guidance and Research
By Taylor Carmichael - Updated Mar 29, 2021 at 11:28AM

Chuy's (CHUY 6.03%) is a casual restaurant chain that serves Tex-Mex food in a happy, festive atmosphere. I've eaten in a Chuy's and the food is excellent. And it doesn't cost too much. If you avoid the alcohol, it would probably cost you about $10 to $15 per person to eat there. You'll probably want to buy a drink or two, though, because it's part of the experience. If our society reopens by Cinco de Mayo, Chuy's will be packed.

Sometimes great restaurants don't make great stock investments, however. While Chuy's stock has been amazing over the last year, since its initial public offering (IPO) in 2012, the stock has underperformed the S&P 500. So why has it been so hot over the past year? Let's take a look. 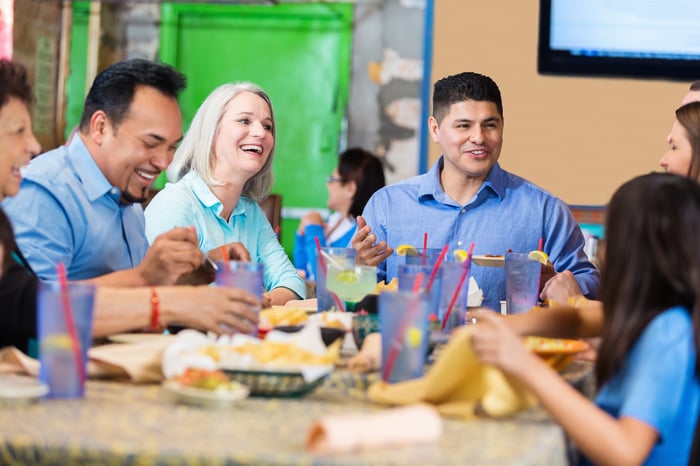 Why is the stock so hot right now?

A year ago, COVID-19 dropped a hammer on the stock market. The market was terrified of the coronavirus. Restaurants were shut down. Restaurant stocks were obliterated. Everything was on sale. So that's a major reason why Chuy's stock has run up 270% in a year. This restaurant stock was starting off from a base of maximum negativity.

You can find these amazing results across the restaurant sector. Here are a class of sit-down restaurant stocks. This is what they've done over the last year.

I expect this sector outperformance to continue in 2021. A lot of tech stocks with high multiples have been getting killed lately. Many institutions appear to be fleeing the expensive tech stocks that have outperformed during COVID-19, and are cycling into airlines, hotels and restaurants in the hopes of a future recovery. The restaurant business is still bad right now. But the market's a forward-looking mechanism. With more and more people getting vaccinated, the restaurant business should pick up dramatically later this year.

So the short-term prospects for Chuy's are looking pretty good. But what about the long-term outlook? Can Chuy's be a dominant casual restaurant chain? Can it pull off a massive rise like Chipotle Mexican Grill did in its early years? Chipotle is now a $40 billion company. Despite its massive size, it's still growing faster than Chuy's. 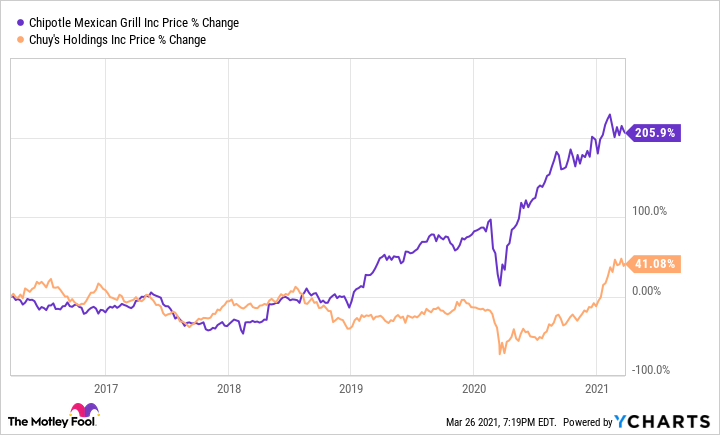 Why Chuy's has underperformed Chipotle

As Peter Lynch wrote in One Up On Wall Street, "Successful cloning is what turns a local taco joint into a Taco Bell or a local clothing store into The Limited." By "cloning," he means that the restaurant chain replicates all the restaurant franchises so there is an overwhelming similarity whenever you go into one. It's exciting to find an original restaurant idea. But the key moneymaker aspect is that the restaurant clones itself so that each franchise is just like the original.

Restaurants can be fantastic growth stocks as they expand from a small region of the country into a national brand. Chuy's was founded in Austin, Texas in 1982. 27 years later, the company opened its first restaurant outside of Texas, in Nashville, Tennessee. Now the company has almost 100 restaurants spread out in 17 states.

So will Chuy's be able to establish its brand worldwide? Not so fast. Perhaps because of its Austin roots, Chuy's prides itself on the originality of each restaurant. The company specifically tries to avoid the "cookie-cutter" approach of making each restaurant similar to every other restaurant in the chain. Indeed, the company's motto is: "If you've seen one Chuy's, you've seen one Chuy's." If you look at photographs of three Chuy's restaurants, you feel like the owners had a civil war and none of them are speaking to each other. Even the company logo is different!

What's even more perplexing is the company's avoidance of the franchise model. Franchising is a way that companies can scale quickly. You build a powerful brand, and then people will pay money to open restaurants associated with that brand.

I think the short-term outlook for Chuy's is very strong. The entire restaurant sector will do very well as our country reopens. But the long-term underperformance of the stock, the rejection of the franchise model, and the chain's inability to expand quickly keep me on the sidelines as an investor. (The food really is good, though.)