Please ensure Javascript is enabled for purposes of website accessibility
Log In Help Join The Motley Fool
Free Article Join Over 1 Million Premium Members And Get More In-Depth Stock Guidance and Research
By Alex Carchidi - Mar 29, 2021 at 8:32AM

Sometimes great investments can fly under the radar for years.

Low-profile companies that compete in obscure niches or highly fragmented markets are unlikely to jump 300% and make headlines, but there's something to be said for a highly reliable stock backed by a business you can trust to stay relevant over time.

Hanger (HNGR 2.97%) isn't a household name, but its business of fitting and supplying prosthetics is evergreen. Its prosthetic and orthotics clinics span the globe, and its deeply humane business is likely to be a permanent fixture for as long as people need help with injuries to their limbs. In my view, this stock is a big opportunity for investors seeking long-term growth at a bargain. Let's dive in and explore why. 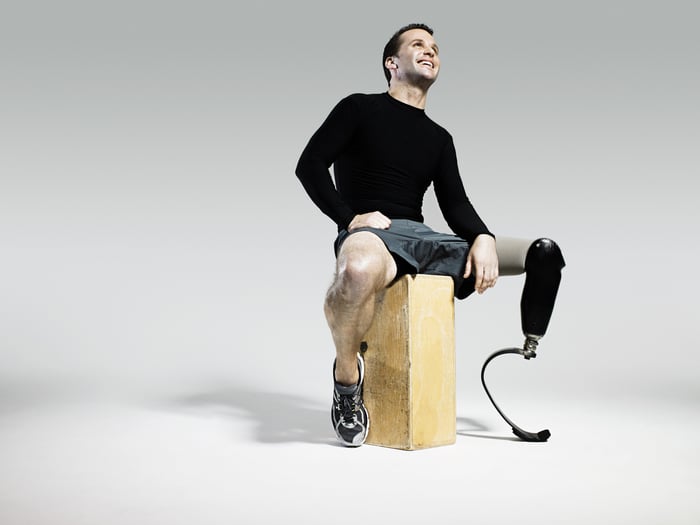 Hanger is the biggest fish in the pond

In the past 12 months, Hanger has made about $1 billion by serving its patients and selling them restorative products. For everything from initial surgeries to prosthetic manufacturing, fitting, and maintenance, the company's clinics can help, meaning that the average patient engages multiple times per year.

Importantly, in the long term, a significant portion of the company's revenues are recurring. People need new prosthetics every three to five years, and they account for more than half of Hanger's patient care revenue. Management estimates that the total addressable market for its products and services is worth around $4.3 billion, and also that the market is growing by up to 2% per year. That's not exactly in growth industry territory, but when paired with the recurring nature of its revenue and steady effort to penetrate the market, it could easily be enough to keep shareholders happy.

Hanger controls about 21% of the existing market, which puts it a quantum leap ahead of its next closest competitor, Veterans Affairs hospitals, which operate about 2% of U.S. orthopedic and prosthetic clinics. In other words, it's the most dominant competitor in its industry by margins that aren't even close. That's great news for investors who might be leery of its thin profit margin getting eroded by competition, as there's no organized competition in the private sector anywhere on the horizon.

The market may not be fully appreciating Hanger's financial strength

In terms of financial metrics, Hanger's quarterly free cash flow has increased by 49% over the past three years, the result of rising gross profit margins and the gradual expansion of its core business. Even if the number of people needing prosthetics doesn't grow hugely from year to year, these gains are proof that management has been diligent in expanding the business and cutting costs.

Likewise, the company's stratospheric return on equity (ROE) of 126.29% over the past 12 months is another positive sign. An ROE that high means Hanger is so effective at profiting from its existing investments, funds, and operations that it more than completely recoups the associated costs. Of course, the ROE can't be interpreted in a vacuum; it can be inflated if a company has a lot of debt, which is the case with Hanger.

For all its merits, there are a few reasons why this stock's price is relatively low for its positive qualities. In short, Hanger's debt load of $510.5 million is one reason for its high ROE, and it's also one thing management will be working on for the next few years. The drop in patient visitation caused by the pandemic is certainly another drag on the business in the short term, but things should soon start to recover.

Then there's the time span in which an investment might pay off. As I mentioned before, prosthetics aren't exactly a hot business, and slow but steady growth is the industry's norm, which is unlikely to be disrupted anytime soon. So, investors looking to grow their portfolios rapidly should probably look elsewhere. But for those who are willing to pick up a stock and hold it forever, Hanger is an excellent option with ongoing staying power.