Please ensure Javascript is enabled for purposes of website accessibility
Log In Help Join The Motley Fool
Free Article Join Over 1 Million Premium Members And Get More In-Depth Stock Guidance and Research
By Keith Speights - Mar 31, 2021 at 6:04AM

This stock has it all.

Investors who are bargain hunters are having to look pretty hard right now to find stocks trading at a discount. That's not surprising, with a stock market that has tripled in value over the past 10 years.

But while they're few and far between, bargains still can be found. There's one stock, in particular, that I think value investors will really like. In my opinion, the best value stock to buy right now is AbbVie (ABBV -0.51%). 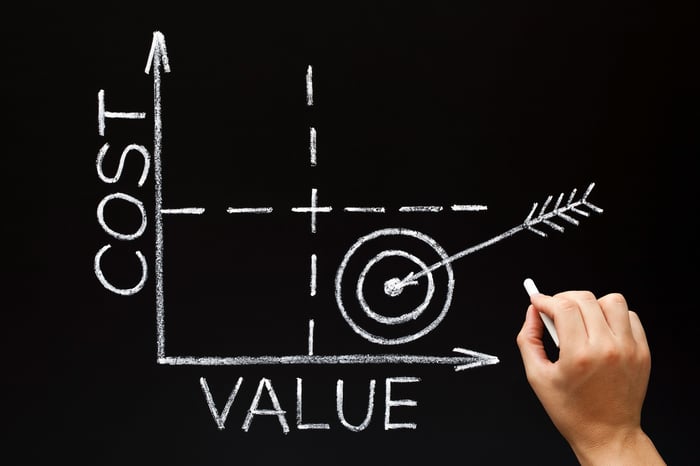 Only seven stocks with market caps of $100 billion or more have forward earnings multiples below 10. AbbVie ranks as the biggest of the group.

The drugmaker's shares currently trade at 7.74 times expected 2022 earnings. Sure, you can find stocks with lower forward earnings multiples. However, most of them are small-cap stocks that don't come close to measuring up to AbbVie in terms of overall strength.

It's not surprising that Warren Buffett has scooped up shares of AbbVie in recent quarters for Berkshire Hathaway. Buffett studied under the father of value investing, Benjamin Graham. While the Oracle of Omaha isn't exactly a purist value investor these days, he still likes to buy great stocks at attractive prices.

Why AbbVie stands out

You might wonder, though, why AbbVie's valuation is so low. There's a simple explanation: Many investors are concerned about the loss of U.S. exclusivity for Humira in 2023. The autoimmune-disease drug contributed more than 43% of AbbVie's total revenue last year. However, I don't think there's much to worry about.

Sure, AbbVie will experience an overall sales decline in 2023. But the company expects to return to growth the following year. Over the rest of the decade, AbbVie projects high single-digit-percentage annual revenue growth.

The company already has two successors to Humira on the market with Rinvoq and Skyrizi. It thinks the two drugs will together generate sales of more than $15 billion by 2025. AbbVie's lineup also includes other key growth drivers such as antipsychotic drug Vraylar and migraine drug Ubrelvy.

In addition to its solid long-term growth prospects, AbbVie offers one of the most attractive dividends around. Its dividend yield currently stands at nearly 4.9%. AbbVie is a Dividend Aristocrat, with 49 consecutive years of dividend increases.

My view is that AbbVie appears to be a great stock to buy for many investors. However, allow me to briefly play devil's advocate.

AbbVie does face some risks. It's depending on growing sales for other products to offset the certain revenue decline for Humira that's on the way. That growth might not happen, at least not to the extent that AbbVie is counting on.

For example, the U.S. Food and Drug Administration (FDA) is skeptical about JAK inhibitors these days because of safety concerns. AbbVie had hoped to win FDA approval for JAK inhibitor Rinvoq in treating psoriatic arthritis by now. However, the FDA pushed its decision back three months and requested additional information from AbbVie about the benefit-risk profile for the drug.

AbbVie has experienced its fair share of clinical setbacks as well. There's no guarantee that the company's pipeline candidates will become the winners that it hopes they'll be.

Despite these risks, AbbVie still ranks as the best value stock on the market, in my view. I don't think there are any other stocks that offer the combination of value, growth, and dividends that AbbVie does.