Please ensure Javascript is enabled for purposes of website accessibility
Log In Help Join The Motley Fool
Free Article Join Over 1 Million Premium Members And Get More In-Depth Stock Guidance and Research
By Jennifer Saibil - Mar 31, 2021 at 7:54AM

The momentum behind this organic growth metric is an encouraging sign of things to come for this online marketplace.

It'd be inappropriate to say COVID-19 was good for anything, considering the damage it caused, but if we were to focus on something positive that came out of the past year, the shift to digital has made many products and services available to customers who otherwise lacked access to such storefronts. And it was also a way for small businesses to keep the lights on while pandemic restrictions were in place.

Etsy (ETSY -1.14%), the online marketplace specializing in unique, handmade goods, was critical to the success of many entrepreneurs and small business owners, and the company's incredible growth over the past year is a testament to the important role it played during the pandemic and also where this e-commerce operation is going.

Activity among habitual buyers, or those who made purchases with Etsy on six or more different days over the past year, has skyrocketed in the past several quarters, and this cohort could play a significant role in the company's future. 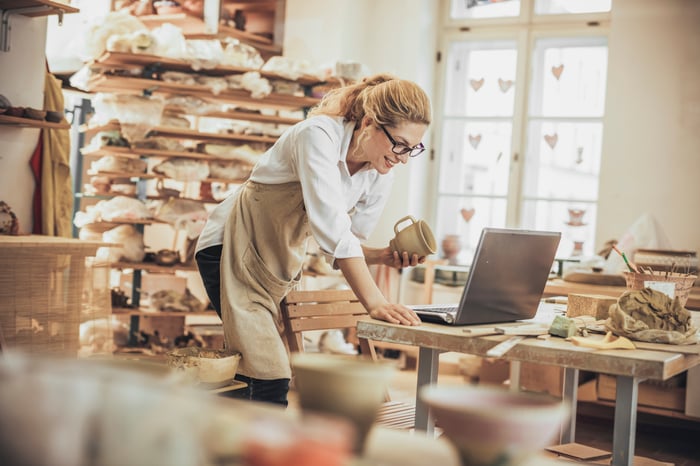 The key to organic growth

Etsy's revenue growth during the pandemic has been nothing short of fantastic. Millions of merchants have flocked to its platform to sell artisan and handmade products that often aren't available anywhere else. In the early months of the pandemic, for example, masks became a best-seller, making up 14% of the company's gross merchandise sales (GMS) in the second quarter of 2020 and driving GMS growth to triple-digit levels.

With this surging demand, management also noted the increased activity among its most loyal shoppers, and some of its strongest growth came from these habitual buyers:

At the end of 2020, Etsy had 6.5 million habitual buyers out of a total 81.9 million active shoppers. As the company brings on new customers, it has increasingly been able to convert them into regular shoppers with gross merchandise sales per active buyer (over the trailing 12-month period) increasing from approximately $100 in 2018 to nearly $120 last year.

Beyond the obvious benefit to the company's top line, this trend is important as Etsy still spends a lot of money on marketing. Marketing has increased as a percentage of gross merchandise sales from 3.4% in 2017 to 4.9% in 2020. As the company seeks to capture more of its addressable market, it has rolled out initiatives like a major ad campaign for the holiday season. While revenue did increase 129% in the fourth quarter, marketing spend was up an even greater 151% year over year. But management continues to prioritize growth due to the encouraging trends from customers including its habitual buyers. Eventually, Etsy will be able to dial back that spending without hampering its long-term growth.

So the pandemic did more for Etsy than pad the top and bottom lines -- it invited customers to try out or return to the platform, and 61 million people did exactly that.

Shares of Etsy are up over 400% in the past year, including a 12% gain in 2021 year to date. The nearly $200 price tag for the stock means it trades at 74 times trailing 12-month earnings. But while the company builds off some of the strongest growth it has ever seen, that multiple is in line with historical levels.

Though management cautioned growth in the current year would likely slow given the tough comparisons in 2020, first-quarter GMS and revenue are still expected to enjoy triple-digit growth rates. CEO Josh Silverman noted in the latest earnings release:

An important focus for 2021 is on frequency -- to be a global brand buyers come back to more than ever through more personalized and engaging experiences, while giving sellers more opportunities to grow. The beauty of our business model is that success is a virtuous cycle -- frequency leads to higher lifetime value of buyers, which allows us to invest more in the marketplace.

The progress Etsy made during the pandemic in growing the ranks of its most loyal customers has established the strong foundation necessary to sustain its long-term growth.

Investors Should Be Excited About Etsy's 103 Million Users

After Posting Just 5% Revenue Growth, Is It Time to Sell Etsy Stock?