Please ensure Javascript is enabled for purposes of website accessibility
Log In Help Join The Motley Fool
Free Article Join Over 1 Million Premium Members And Get More In-Depth Stock Guidance and Research
By Patrick Bafuma - Updated Apr 1, 2021 at 8:12AM

TIL therapy looks able to win a large addressable market, and Iovance is the leader of the pack.

Much has been made of chimeric antigen receptor T-cell therapy (CAR T-cell therapy) over the past four to five years. And while the therapy is certainly impressive, it typically only applies to liquid tumors (such as lymphoma, leukemia, or multiple myeloma), which only account for about 10% of new cancer diagnoses in the U.S. Additionally, CAR T-cell therapy often has only a single target (rather than attacking multiple locations on a tumor) and can cause adverse events such as cytokine release syndrome.

Enter tumor infiltrating lymphocytes, or TIL therapy. Unlike CAR T-cell therapy, this approach targets multiple sites on a tumor. It can target solid organ cancers, including melanoma, cervical cancer, head and neck cancer, and lung cancer, and has not had any unexpected off tumor tissue effects to date. 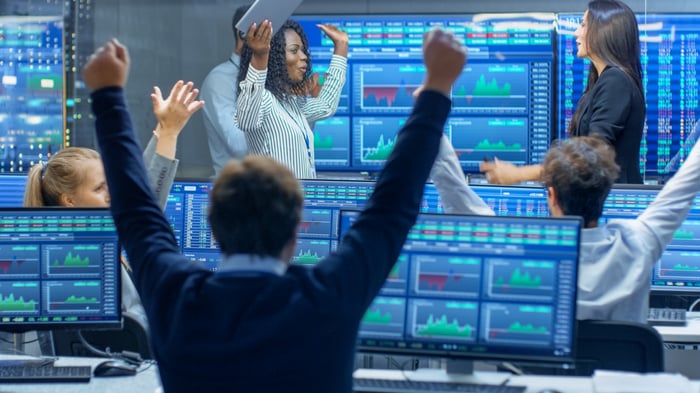 The company with the therapy furthest along in trials is Iovance Biotherapeutics (IOVA 2.30%). The company's management team believes TIL therapy "represents a highly differentiated, personalized, and targeted immunotherapy" for treating the 1.6 million new cases of solid tumors in the U.S. annually, and the company is setting a high bar with excellent data thus far.

While the company has no approved drugs as of yet, Iovance's phase 2 data for metastatic melanoma is trouncing current standards of care in clinical trials. Current metastatic melanoma treatments have an overall response rate of only 4% to 10%, with overall survival of just seven to eight months.

Last year, Iovance showcased phase 2 data for Lifileucel, its lead TIL therapy for metastatic melanoma, demonstrating an impressive overall response rate of 36%, an 80% disease control rate, and a median duration of response not yet reached at 28 months of follow-up. All of this is especially impressive given that the participants in the study had received a median of 3.3 other treatments prior to enrollment. Lifileucel's results in a more general population will very likely be even better -- and a lot of patients and investors stand to benefit soon, with pivotal phase 3 data (and a Biologics License Application from the U.S. Food and Drug Administration) expected in 2021.

For patients who had undergone a mean of 2.4 prior treatments for metastatic cervical cancer, Lifileucel's phase 2 data crushes the current standard of care; a whopping 85% of patients had at least stabilized disease that was no longer getting worse (also known as disease control rate) or, even better, 44% of all patients had reduced tumor burden (also known as a response rate). Median duration of response at 7.4 months of follow up has not yet been reached, meaning that Lifileucel is potentially at least as good if not better than today's overall survival of less than eight months for second-line treatment.

It's not a treatment, it's a platform

A good starting point for a cost comparison may be Gilead Sciences' (GILD -0.83%) Yescarta, a CAR-T therapy approved in October 2017 for patients with certain types of blood cancer (like B-cell lymphoma) who have failed multiple other treatments. Yescarta costs $373,000 for a one-time treatment, according to drugs.com. This seems like a reasonable price comparison as both CAR-T and TIL therapy require exquisite individualized processing before patient treatment.

With just over 10,000 patients for the combined markets of metastatic melanoma and advanced cervical cancer, this equates to a total addressable market of at least $3 billion for Iovance, which is trading at around a $4.3 billion market cap. That sounds rather low for a company that should likely face the FDA for approval for melanoma and cervical cancer treatments by the end of 2022.

But this is just the beginning, as the company also has promising early data for head and neck cancer as well as non-small-cell lung cancer, demonstrating that this could very much become not just a treatment, but an entire platform. Gilead obtained its CAR-T treatment Yescarta by way of acquisition of Kite Pharma, with the intention of Kite's platform eventually positioning the company as an oncology leader. This cost Gilead $11.9 billion to buy Kite Pharma, which at the time of acquisition, had Yescarta pending FDA approval.

Given all of this, with a larger total addressable market and fewer adverse events, one has to wonder how long it will take for big pharma to notice Iovance and its $4.4 billion market cap. If you're a biotech investor looking to add an exciting oncology growth stock to your portfolio, it's well worth your time to take a good look at Iovance.