Please ensure Javascript is enabled for purposes of website accessibility
Log In Help Join The Motley Fool
Free Article Join Over 1 Million Premium Members And Get More In-Depth Stock Guidance and Research
By Keith Speights - Apr 2, 2021 at 5:52AM

Market rotation malaise has infected many investors. Last year, the growth stocks in the Nasdaq-100 index trounced the staid giants in the Dow Jones Industrial Average. It's been a different story so far in 2021, though. The big money appears to be moving into so-called "risk-off" stocks.

As a result, many of the high-flyers from just a few months ago are now stuck in the doldrums. Some are even down more than 30% from their peaks set earlier this year. There's a silver lining in this dark cloud, however: Quite a few stocks with strong growth prospects are available at discounted prices. Here are three beaten-down stocks that could even double your money -- or more. 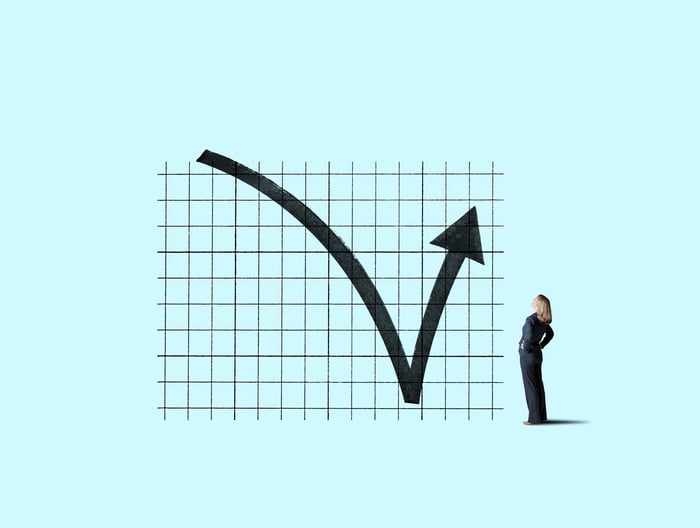 DermTech (DMTK -8.77%) markets an exciting product: a skin genomics test that can detect melanoma more accurately and cheaper than surgical biopsy. Its shares soared over 145% year to date by the third week of February. Since then, though, the healthcare stock has fallen more than 35%.

Part of the problem was the aforementioned general sell-off of growth stocks. However, DermTech also provided disappointing guidance in its fourth-quarter update. The company expects first-quarter assay revenue of between $1.6 million and $1.9 million compared to Q4 assay revenue of $1.6 million.

The total addressable U.S. market that DermTech is targeting for all types of skin cancer is around $10 billion. With the company's market cap currently below $1.5 billion, DermTech should only have to capture a tiny sliver of this market to deliver huge returns for investors.

Special purpose acquisition company (SPAC) stocks were wildly popular not long ago. That's changed quite a bit. Gores Holdings VI (GHVI) serves as a great example: The SPAC's shares skyrocketed more than 120% year to date by mid-February but are now down over 40% from those highs.

Gores Holdings VI and spatial data company Matterport announced on Feb. 8 that they plan to merge in a deal that will take Matterport public at an equity value of around $2.9 billion. But Matterport should be able to grow much larger than that relatively quickly.

Matterport pioneered the spatial data market a decade ago. The company's technology can create a 3D "digital twin" of any physical space. Consulting firm Accenture recently picked digital twin technology as one of its top five tech trends of 2021.

The company already has over 250,000 customers, including 13% of the Fortune 1000. However, less than 1% of the more than 4 billion buildings across the world are currently digitized. This represents a $240 billion opportunity for Matterport. The company expects to nearly double its revenue in 2022 with growth accelerating in subsequent years.

Skillz (SKLZ -3.78%) stands as the biggest loser of these three beaten-down stocks. Shares of the mobile game platform provider soared nearly 120% by early February only to give up all of those gains and then some. The stock is now down over 5% year to date.

Like DermTech and Gores Holdings VI, Skillz was negatively impacted by the market rotation away from growth stocks. However, the company's decision to sell 17 million shares in a public offering also hurt.

The mobile gaming market totaled $86 billion last year and continues to grow rapidly. Skillz should be able to increase its market share as it expands internationally and adds new genres of games to its platform. The company's multi-year agreement with the NFL could also provide a big boost.

Skillz looks like a stock that could easily double your money and perhaps deliver much greater returns than that over the next couple of years.