Please ensure Javascript is enabled for purposes of website accessibility
Log In Help Join The Motley Fool
Free Article Join Over 1 Million Premium Members And Get More In-Depth Stock Guidance and Research
By Alex Carchidi - Apr 4, 2021 at 6:11AM

They've both taken a beating, but their fortunes may soon change.

While it might make you feel uneasy to invest in a wounded business, it's worth doing at least once to gain experience, not to mention the chance of a tidy return. After all, if companies never faltered, it'd be impossible to find stocks to buy at a discount in hopes of a skillful turnaround.

In the world of biotech, sometimes turnarounds can happen overnight -- and that's exactly what I'll be discussing today. These two companies face forks in the road in April that will determine their future, whether it's a return to good fortune or a further descent into their recent doldrums. Let's dive in. 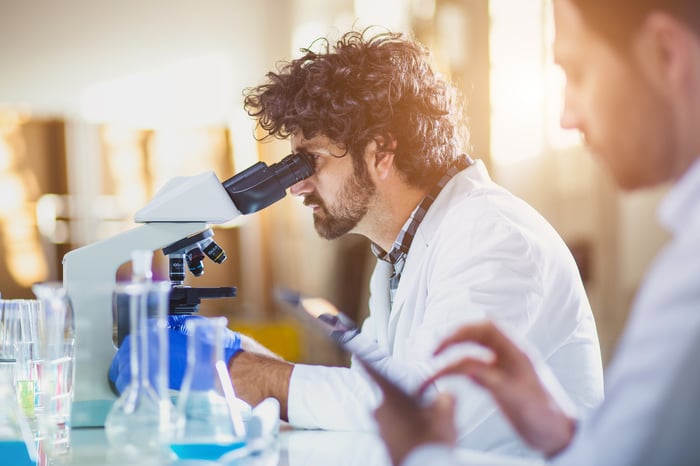 For the last few years, Supernus Pharmaceuticals (SUPN 1.36%) has been a chronic underperformer compared to the wider market. Nonetheless, the company doesn't sound like a typical laggard, as its pipeline is mature enough to keep it alive even if one of its clinical programs falters. In fact, Supernus already has a portfolio of five neurology therapies on the market, treating conditions like Parkinson's disease and epilepsy. As a result, sales revenue and operating earnings have risen steadily over the past five years (with the exception of 2019), reaching $520 million and $174 million respectively at the moment. So, what's the problem with it, and how might it recover?

In short, in November regulators at the Food and Drug Administration (FDA) rebuffed the company's approval filings for SPN-830, the company's Parkinson's disease drug. Similarly, when in November Supernus filed for approval for its pediatric ADHD therapy, the FDA requested additional information rather than giving it the OK. Both of these developments are fixable, and as it turns out, the company is scheduled to meet with regulators again in early April.

Supernus may need to gather more data to support its regulatory filings to get these two drugs out the door. But depending on what the FDA requests in the meetings, it could mean either a small amount of extra work and a commercial launch of its ADHD therapy by the second quarter, or a large amount of work and lengthy delays. If management signals that regulators only need a little bit extra to support one or both of the filings, it'll be a major positive sign that could galvanize the stock -- but an opposite sentiment could lead to a sharp slump.

Continuing with the theme of clinical paperwork misadventure, Acadia Pharmaceuticals (ACAD 1.66%) took a sharp fall early in March when, you guessed it, the FDA rejected its filing for its drug to treat delusions in dementia patients, without specifying why. The same drug, pimavanserin, is already approved for psychosis in Parkinson's disease. Thus, investors can still take heart in the company's five-year streak of rapidly increasing sales revenue, which makes the market's negative reaction look a bit overblown to say the least. In 2020, revenue grew by 30% year over year, which is nothing to sneeze at.

Early in April, Acadia will meet with regulators again to discuss the issues with pimavanserin. The stakes are high for shareholders, but it's important to realize that the company has other catalysts in the near future. Its ACP-044 drug for chronic and acute pain in bunionectomies and osteoarthritis will be starting two phase 2 clinical trials before the end of the second quarter. Later in the year, its drug for Rett syndrome will have a data readout from its phase 3 trial, which could give the stock a massive boost if the results are favorable.

In the long term, it's hard to see how Acadia could continue to falter as long as its pipeline keeps delivering. While it's true that the company's earnings have been lackluster, resulting in a net loss of $281.6 million dollars in 2020 -- a 20% worsening compared to the prior year -- rapidly growing revenue should continue to defuse shareholder concerns for the moment. Daring investors should considering buying the stock before it finishes navigating the regulatory issues to capture the largest swing in its price.