Please ensure Javascript is enabled for purposes of website accessibility
Log In Help Join The Motley Fool
Free Article Join Over 1 Million Premium Members And Get More In-Depth Stock Guidance and Research
By Keith Speights - Apr 7, 2021 at 5:52AM

Their businesses are built to survive and thrive over the long run.

Warren Buffett once said, "If you aren't willing to own a stock for ten years, don't even think about owning it for ten minutes." To be quite candid, there are some popular stocks on the Robinhood trading platform that you definitely wouldn't want to own for 10 years. Some of them could be risky to hold for 10 minutes.

However, quite a few stocks favored by Robinhood investors are definite keepers. These are stocks of well-run businesses that have solid long-term prospects. You wouldn't want to sell these stocks after just 10 years go by. Here are three Robinhood stocks you can buy and hold forever. 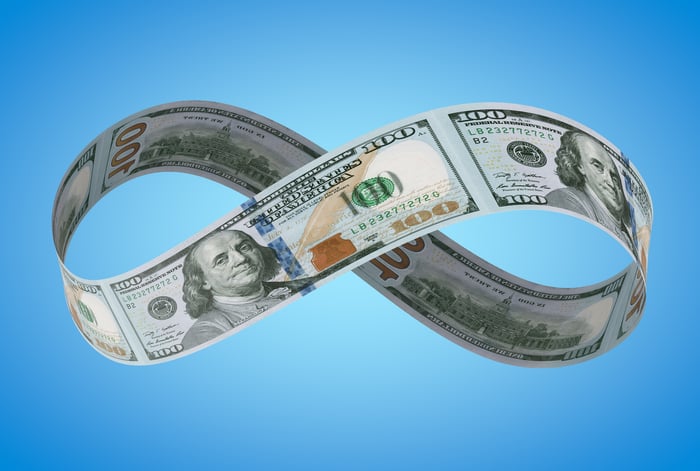 Just how ingrained has Amazon.com (AMZN 0.25%) become to our daily lives? As I write this, an Amazon Echo Dot that runs the Alexa virtual assistant AI technology sits on my desk. I read a book on my Amazon Kindle app over the weekend. I'm in the middle of a TV series on Prime Video. Packages bought on Amazon regularly arrive at my doorstep. I've used at least four apps that I know are hosted by Amazon Web Services (AWS) within the last 72 hours.

I know that it's theoretically possible that all of this could evaporate down the road. But I don't see it happening. Actually, I think that it's much more likely that Amazon will become even more part of everyday life.

Yes, the bigger Amazon becomes the harder it will be to deliver the kind of growth the company has generated in the past. Maybe antitrust regulators will try to split up the company at some point. I'm not concerned, though. My view is that Amazon would be worth even more if its components were stand-alone entities.

I also fully expect that Amazon will be able to achieve surprisingly robust growth despite its massive size. The company is expanding its grocery business. It's developed a self-driving robotaxi. Amazon is increasing its presence in the healthcare market with plans to launch its Amazon Care telehealth service for employers this summer. It reportedly has a home robot on the way as well. All of this holds the potential to boost Amazon's revenue -- and staying power.

Like Amazon, Disney (DIS -0.70%) claims a spot in the top 10 most popular stocks held by Robinhood investors. I can't think of many stocks that I'd rank more highly in the hold-forever category than this entertainment icon.

Now more than ever, content is king. And I'd argue that Disney is the king of content. The company owns many of the most lucrative media franchises, including ESPN, Marvel Studios, and Pixar.

Disney proved with an exclamation point that it could compete in the streaming TV market. Its Disney+ subscriber base skyrocketed during the pandemic. The company's commitment to steadily roll out new Marvel and Star Wars films and TV series should keep viewers hooked and continue attracting new subscribers. The debuts of major new movies this summer such as Black Widow and Cruella simultaneously in theaters and for a premium price on Disney+ could also be big draws.

The company's theme parks were its weakest links during the pandemic. However, thanks to the increased availability of COVID-19 vaccines, this part of Disney's business should rebound nicely in the not-too-distant future. Over the long run, Disney should be able to keep working its magic for audiences, parkgoers, and investors.

Johnson & Johnson (JNJ 1.75%) stands out as one of the key players that are helping Disney (and others) make a comeback from the pandemic. The company's single-dose COVID-19 vaccine won U.S. Emergency Use Authorization in late February.

This vaccine isn't the main reason why Johnson & Johnson is a stock to buy and hold forever, though. It's merely one product in a long lineup marketed by the healthcare giant. J&J's diversification across the fast-growing healthcare sector makes it an ideal stock to own for decades.

The company is best known for its consumer health products such as Band-Aid bandages, Listerine, and Tylenol. However, J&J also runs a multibillion-dollar medical devices business. The healthcare giant's biggest moneymaker is its pharmaceutical segment, which sells blockbuster therapies including autoimmune disease drugs Stelara and Tremfya and cancer drugs Darzelax and Imbruvica.

In addition, Johnson & Johnson belongs to an exclusive group of stocks known as Dividend Kings -- members of the S&P 500 with at least 50 consecutive years of dividend increases. J&J's streak of dividend hikes currently stands at 58. That track record underscores the company's stability -- the kind of stability you want in a stock that you can hang onto.