Please ensure Javascript is enabled for purposes of website accessibility
Log In Help Join The Motley Fool
Free Article Join Over 1 Million Premium Members And Get More In-Depth Stock Guidance and Research
By Jeremy Bowman - Apr 7, 2021 at 11:29AM

Shares of the private prison operator tumbled after the company suspended its dividend.

Shares of GEO Group (GEO -0.86%) were getting hammered Wednesday morning after the operator of private prisons and detention centers said it was suspending its dividend in order to maximize cash flow to repay debt, deleverage, and fund growth. 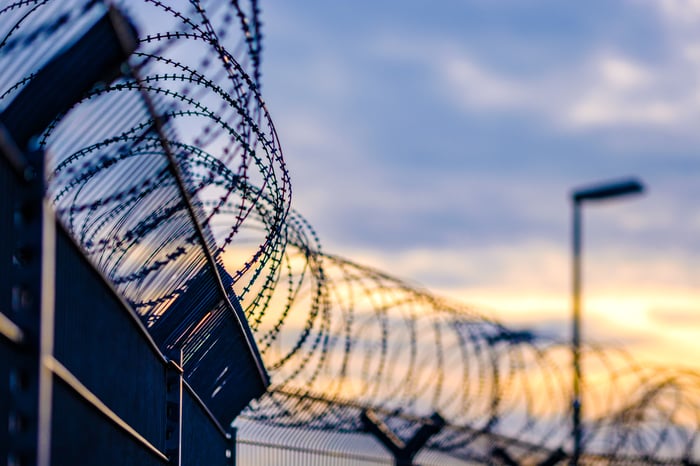 GEO Group's performance had weakened over the year, and the company has come under increasing pressure since President Joe Biden was inaugurated. In his first week in office, Biden signed an executive order to roll back the government's use of private prisons as part of an effort to combat systemic racism. GEO Group has already begun feeling the impact of that order. Last month, it announced that the U.S. Marshals Service had failed to renew its contract to operate a detention facility in New York. That contract had generated $19 million in annual revenue for the company.

In addition to the decision to suspend its dividend, which was yielding 12.8% before Wednesday's announcement, the company also said it was reevaluating its corporate structure as a REIT (real estate investment trust), though it said it intended to maintain it. The company said it would make a decision by the fourth quarter, and that if it did decide to keep its current structure, it might have to pay out another dividend. REITs are required to distribute at least 90% of their taxable income to investors.

Given the shifting political landscape, reducing debt is a smart move for GEO, which seems to be preparing for a significant decline in business. While the stock looks cheap according to traditional metrics, it could be a value trap as the shares are much less valuable without a dividend, and the debt burden is a clear weight on the business.