Please ensure Javascript is enabled for purposes of website accessibility
Log In Help Join The Motley Fool
Free Article Join Over 1 Million Premium Members And Get More In-Depth Stock Guidance and Research
By Alex Carchidi - Apr 9, 2021 at 7:33AM

This biotech's heart medication could be wildly lucrative.

Would you want to invest in a biotech with a successful product, surging revenue, and barely any debt? And would your answer change if you heard that the stock's price is less than $7 per share?

Hopefully, your answers are "yes," and "no." For investors eyeing Amarin Corporation (AMRN -3.36%), this isn't an idle exercise. Between the company's hot revenue growth and a deep global market for its newly approved heart disease medication, it has a lot of room to make buyers rich -- as long as generics and competitors don't eat its lunch. 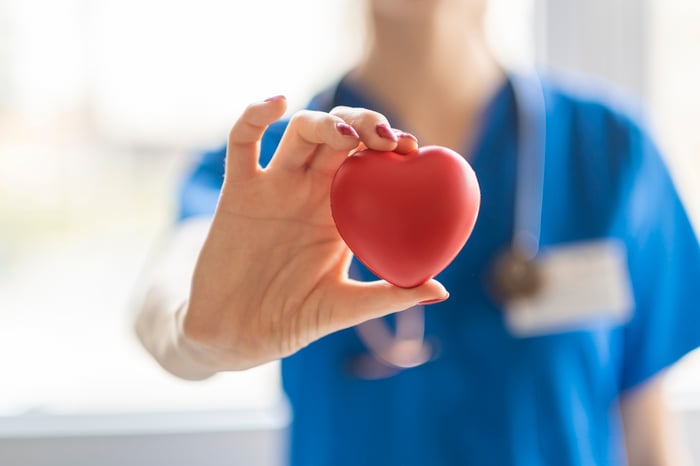 The biggest argument in favor of buying Amarin in April is that its revenue from drug sales is growing rapidly, and it could continue to do so for quite some time thanks to the recently expanded indications for Vascepa, its leading drug.

In January of 2020, Vascepa launched in the U.S. shortly after its regulatory approval for reducing the risk of acute heart problems in patients who are taking statins. Before that, it had been on the market since 2013 to treat severely high triglyceride levels that were not responsive to changes in a patient's diet, but the newly expanded indication is the more exciting part for investors.

If you're not familiar, statins are a class of drugs that are very effective at reducing the risk of death from cardiovascular disease by lowering patients' cholesterol, so the fact that Vascepa can lower the risk even further is valuable. Plus, the market for statins is immense. Even nearly a decade after its patent for the drug expired, Pfizer's blockbuster statin Lipitor is still making the company around 2 billion dollars per year, and it's just one of many that are approved.l

But, thankfully for Amarin, the fact that many statins have lost their patent protection simply doesn't matter. Vascepa isn't a statin itself -- it's an add-on therapy. In the U.S. alone, between 35 million and 38 million people take statins. As long as people need their cholesterol lowered in a safe and controllable fashion, statins will keep selling, and that means Vascepa will keep having a healthy target market.

This also means that investors can expect revenue from Vascepa prescriptions to be highly recurring, with patients being treated with it for years or even decades. So, hot off the newly expanded indication at the start of the year, it's no surprise that throughout 2020, prescriptions for Vascepa in the U.S. increased by 39% compared to 2019, and annual total net revenue increased by 43% to reach $614.1 million.

Americans aren't the only ones who could benefit from Vascepa. Globally, Amarin estimates that there are as many as 486 million people who are eligible to take statins or who are already taking them, but it's still in the earliest stages of exploiting this larger market. Last month, regulators in the E.U. gave the green light for the company to sell Vascepa. Approval in China could happen before the end of the year, and Amarin has already submitted the necessary paperwork.

The argument against buying now

As great as the future revenue from Vascepa piggybacking onto statins will be, it isn't the only story that investors need to know about Amarin. In particular, a generic version of Vascepa launched in late 2020. That means its revenue based on sales for this indication will face stiff headwinds in the near future. But that generic is only indicated for Vascepa's older application -- reducing triglycerides when a patient's diet isn't helping enough -- so it won't harm the revenue growth occurring due to the newly expanded approval.

Then there's the company's unprofitability and rising costs. Its annual cost of goods sold increased sharply from $96 million in 2019 to $131.4 million in 2020. Selling, general, and administrative (SG&A) expenses also rose by around $140 million in the same period. Nonetheless, these additional costs are to be expected as a result of preparation for the new Vascepa approval, so investors shouldn't be overly fixated on them.

Overall, Amarin's future is bright, and investors who purchase the stock in the near term will probably be pleased over the next few years as revenue from Vascepa skyrockets. In my view, the fact that one of the drug's older indications now has generic competition is nothing to be scared of, as the market for its new indications is essentially the same size as the market for statins, which is both enormous and traditionally a big moneymaker for drug companies.

Finally, while I'm bullish on this stock, I don't see any particular catalyst that would demand investing immediately. Still, it'll be preferable to buy the stock before the market prices in the growth of the expected revenue from international sales pursuant to any additional drug approvals later this year.