Please ensure Javascript is enabled for purposes of website accessibility
Log In Help Join The Motley Fool
Free Article Join Over 1 Million Premium Members And Get More In-Depth Stock Guidance and Research
By John Rosevear - Apr 12, 2021 at 11:29AM

The machine-vision specialist has developed its own self-driving system for commercial vehicles.

Udelv and Mobileye said that the autonomous vans, which Udelv calls Transporters, will be powered by the Mobileye Drive self-driving system and will begin operation in 2023. Udelv expects to build more than 35,000 Transporters by 2028.

Udelv already has one order for the Transporter: Donlen, a Hertz Global Holdings subsidiary that leases and manages commercial-fleet vehicles, has ordered 1,000 of the autonomous vans for delivery starting in 2023. 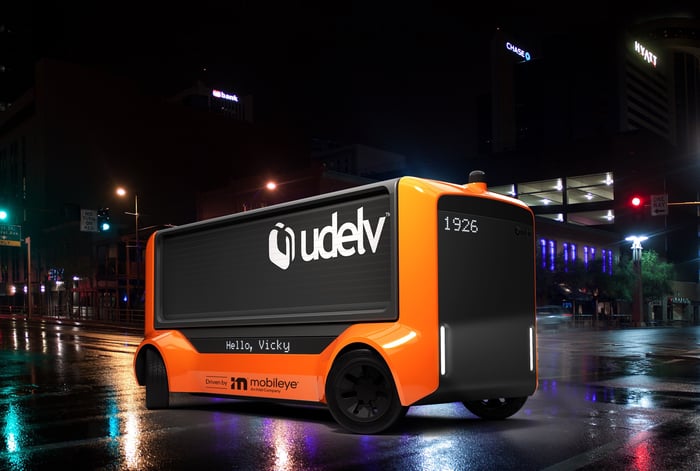 Mobileye CEO Amnon Shashua said that the Udelv deal demonstrates that his company is ready to deliver Mobileye Drive for commercial customers now.

"COVID-19 has accelerated demand for autonomous goods delivery, and we are delighted to partner with Udelv to address this demand in the near term," Shashua said.

This isn't the first win for the Mobileye Drive system. The company said in February that it is collaborating with European bus operator Transdev and French truck builder Lohr to develop autonomous electric shuttle buses, and it previously announced plans to launch its own autonomous-taxi service in Israel next year, using vehicles developed with Chinese automaker NIO (NIO 1.39%).

Intel and Rolls-Royce Team Up for Autonomous Shipping