Watch for this market leader's public listing, whatever route it takes to reach Wall Street.

The American online grocery delivery service Instacart is not yet publicly listed, but the company has clearly announced an IPO on its horizon. Rumor has it that Instacart may snub a traditional IPO for a direct listing. How it goes public will have major implications on initial stock price, dilution, and lockup periods, impacting both new and existing investors. 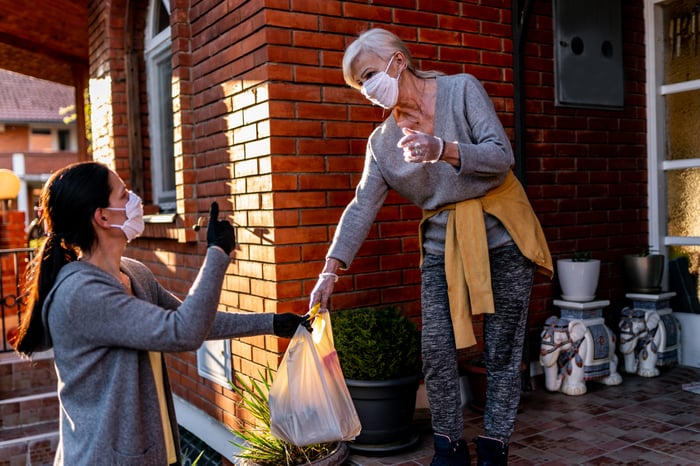 Instacart has established its foothold as the market leader in its space, with a wide enough competitive moat to sustain it. Its main competition consists of food delivery platforms like DoorDash and established grocers like Walmart (WMT 1.85%), Amazon.com, and Target.

After an intense competitive showdown during the pandemic, Instacart wound up dominating Walmart; the retail and grocery giant's market share in online grocery delivery fell from 50% to 25% as it struggled to keep up with demand. Rather than keep fighting, Walmart gave in and forged a partnership with Instacart to offer same-day grocery delivery, helping both companies compete against Amazon's Whole Foods and Target.

Food delivery platforms like DoorDash are simply too focused on the restaurant delivery market to effectively compete with Instacart for online grocery delivery market share. Instacart has existing partnerships, massive scale, and a laser focus on its market that might be nearly impossible to beat.

The significance of Instacart's existing partnerships cannot be overstated; the company acts as a Shopify-type platform for its partners to increase sales via an improved shopping experience. Instacart even has a robust Enterprise service that provides e-commerce solutions for partner stores, including branded websites and apps with integrated Instacart delivery. This vital offering is not only sure to attract new partners, but also increases switching costs for existing partners. This facet of Instacart's business highlights the important point that it is a tech company (not a grocer), and that technology will likely sustain its competitive foothold over grocers.

Instacart's domination in 2020 and beyond

Instacart's growth during the pandemic pushed virtually all major competitors to the side, and the company's traction is unlikely to slow down as vaccinations roll out. The COVID-accelerated digital shift across industries is not going away anytime soon. As a case in point, the market for online grocery delivery is projected to reach 21.5% of all U.S. grocery sales by 2025 (doubling its 2020 market share).

Instacart gained over 200 new partnerships in 2020, totaling almost 600 retailers across over 45,000 stores, and the company has maintained roughly 50% share of the online grocery delivery market since March 2020.

Moving forward, the way Instacart treats its workers could pose a major risk to its dominant market position. Roughly 98% of Instacart's more than half a million "shoppers" are paid as independent contractors. Instacart was already under scrutiny for its possible misclassification of full-time employees as independent contractors when it recently laid off almost 2,000 of its full-time employees -- including its only unionized employees.

Internally, Instacart will need to carefully manage its relationships with its shoppers by offering attractive alternative "benefits" to replace the traditional benefits and protections of full-time employees. Externally, the company joins companies like Uber in battling lawmakers and public opinion to employ gig workers as independent contractors.

While the passage of Proposition 22 in California sets the precedent for companies like Instacart to continue with business as usual, increased visibility on the issue of employment misclassification will likely result in stricter legislation in states across the country. In this case, Instacart would have to fundamentally alter its business model in order to remain profitable -- or pull out of those states altogether, like Uber almost did in California last year. Hopefully, Instacart will develop a strategy to classify its employees fairly while remaining profitable and competitive in the long term.

The company has announced plans to IPO, but there are recent whispers that it will opt instead for a direct listing. Unlike an IPO, a direct listing does not actually create new shares for sale -- instead, it lists existing, privately held shares on the public market to be sold and bought freely at prices investors agree upon.

An IPO involves extensive negotiations between the company and investment bankers to determine a stock price, and it requires a lockup period in which existing private investors cannot sell their shares on the market. The new equity created for an IPO gets priced by investment bankers, rather than by the market, and will likely drop in value after the lockup period ends and insiders sell their shares, boosting supply on the market. Additionally, the new infusion of public capital will dilute existing investors.

Instacart may go the direct listing route partially because it does not need additional fundraising. The company has had three major equity raises since the start of 2020, and its resulting valuation has seen a fivefold increase in that time frame (rising to its current $39 billion). Further, an IPO raises concerns for Instacart management about leaving money on the table by pricing an offering too low.

Watch for Instacart to go public in 2021, but don't necessarily buy right away. IPOs and direct listings have a tendency for instability, especially on the first day. After the company goes public, keep an eye out for reports of Instacart's online grocery delivery market share remaining above 50%, and for successful rollouts of developing innovations like Instacart Enterprise, Instacart ads, and the Instacart credit card. It will also be important to watch the legislative and public opinion surrounding Instacart's relationships with its workforce, which could have major implications on company performance and stock price.