Please ensure Javascript is enabled for purposes of website accessibility
Log In Help Join The Motley Fool
Free Article Join Over 1 Million Premium Members And Get More In-Depth Stock Guidance and Research
By Rekha Khandelwal - Apr 14, 2021 at 9:42AM

These renewable energy utilities look all set to grow well over the long term.

For investors, the chief concern when it comes to investing in renewable energy companies is their generally erratic performance. Even after decades, the industry is still evolving. It may take several more years, if not decades, before some companies in the renewable energy space start generating steady profits.

However, against that backdrop, there are other renewable energy companies that are not only generating steady cash flows but are also paying hefty dividends to their shareholders. Here are three that are already doing well and look set to grow in the long run.

At current share prices, the dividend paid by Algonquin Power & Utilities (AQN 2.61%) yields 3.8%. The company derives one-third of its income from renewable energy generation and two-thirds from rate-regulated electric, gas, and water utility businesses. In the last 10 years, the company increased its dividend at an impressive compound annual rate of 10%. 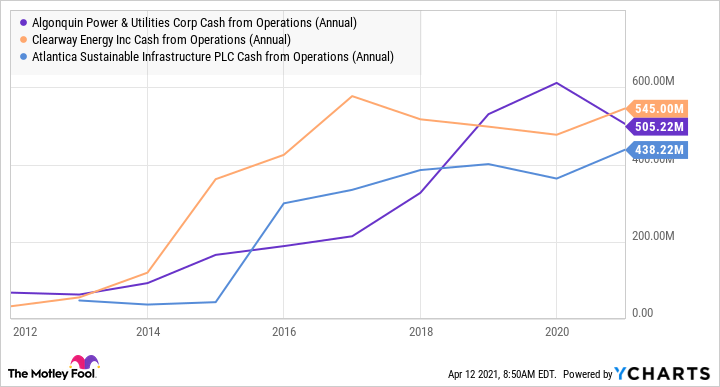 Further, between 2021 to 2025, Algonquin Power & Utilities expects to grow its adjusted earnings per share by 8% to 10% annually. The company plans to invest $9.4 billion into capital projects during that period, $3.1 billion of which will be deployed in its renewable energy business. These investments should drive its earnings growth in the coming years. With an impressive growth track record, an attractive yield, and a solid investment plan, Algonquin Power & Utilities looks like a great stock to buy right now.

Clearway Energy's (CWEN 2.27%) stock price has fallen by around 21% from its high in 2021, pushing its dividend yield up to more than 4%. The company derives nearly half of its revenue from its renewables business, and has steadily grown its operational cash flow over the years.

In March, based on the progress in its growth projects, Clearway raised its pro forma cash available for distribution (CAFD) guidance for 2021 to $385 million from $345 million. It generated CAFD of $295 million in 2020. 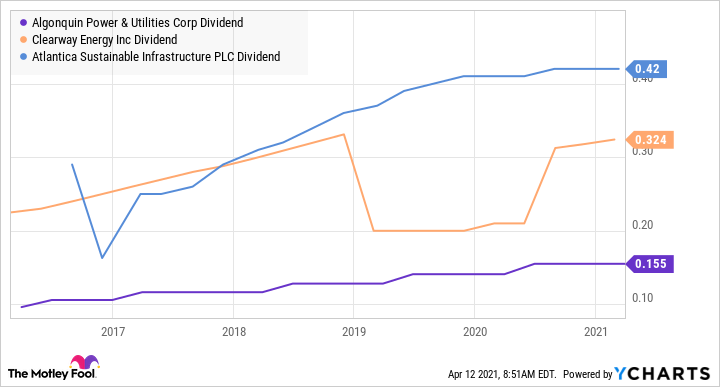 In 2020, Clearway Energy derived 34% of its revenue from sales to Southern California Edison and 18% from PG&E (PCG 2.60%). Clearway had to reduce its dividend in 2018 when PG&E entered bankruptcy, but in the years since, it has raised its quarterly payout back to almost what it was prior to the cut. PG&E emerged from bankruptcy in July, and has kept its contractual commitments to Clearway and others.

Meanwhile, Clearway continues to diversify its customer base to reduce its risks. For example, revenue contribution in percentage terms from Southern California Edison has fallen from 40% in 2018 to 34% in 2020. Similarly, PG&E's contribution is down from 23% in 2018.

In the wake of a 16% or so share price decline from its peak this year, Atlantica Sustainable Infrastructure (AY 5.36%) is right now offering an alluring yield of 4.3%. The company generates nearly 70% of its cash flows from renewable energy operations. Its assets are spread across North America, South America, and Europe. It's worth pointing out that Algonquin Power & Utilities holds a 44.2% stake in Atlantica Sustainable Infrastructure.

Atlantica Sustainable has grown its cash flow and dividend steadily since 2016, when it separated from parent Abengoa. In 2020, the company grew its CAFD by 5.5%. The company expects a 15% growth in its CAFD in 2021, driven by recent growth investments. In the mid-term, it expects to grow CAFD per share at 5% to 8% annually. Atlantica plans to invest around $300 million into growth projects each year through 2023, which should drive that cash flow growth. It spent $302 million on growth projects in 2020.

3 Stocks That Will Pay You to Help Fight Climate Change