The cryptocurrency company went public Wednesday afternoon through a direct listing, and began trading well above its reference price.

Cryptocurrency exchange platform Coinbase started trading publicly Wednesday through a direct listing process. Anticipation for the listing was apparent before the first trade, with Bitcoin (BTC -0.17%) itself trading at a record price of over $64,000 early. At its opening price of $381 per share just before 1:30 p.m. EDT, Coinbase was being valued at approximately $100 billion. That share price was also about 55% above the reference price, and in initial trading, it climbed from there.

Coinbase is the largest cryptocurrency trading platform in the U.S. by volume. Globally, it has over 56 million verified users, operates in more than 100 countries, and has over $220 billion in assets on its platform. Retail cryptocurrency investors generate 95% of its transaction revenue, with the balance from institutional investors. So all in all, it's not surprising that its public debut is drawing significant investor interest. 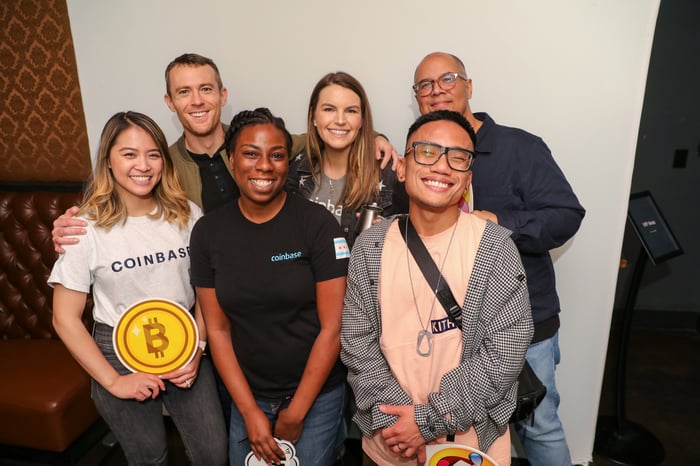 Ahead of the public listing, Coinbase released its preliminary first-quarter results as well as its 2021 outlook. The company said revenue in the quarter soared ninefold versus the prior-year period to $1.8 billion. It also said net income would be between $730 million to $800 million, compared to just $32 million the year before. Bitcoin purchases represent a major portion of transactions on Coinbase, and the company noted that trading volume, and therefore transaction revenue, will fluctuate with volatility in Bitcoin and other crypto assets.

Investors should consider the $100 billion valuation before jumping into this newly available stock. And even people who are enthusiastic about the futures of both cryptocurrency and the Coinbase business model should think about keeping it to a speculative portion of their portfolios.