The Daimler brand is presenting its new electric vehicle strategy to the public.

German automaker Daimler (DMLR.Y -0.85%) is taking its case to the public this week for its upcoming Mercedes brand electric vehicles (EVs). The company highlighted its EQS luxury sedan, and said it will unveil its all-electric compact EQB SUV this weekend at the Mercedes-EQ night in Shanghai.

Both vehicles will directly take on Tesla (TSLA -2.44%) on the global stage. Tesla began shipping its Model Y crossover SUV from its Shanghai factory earlier this year. Competition for Tesla's Model S will also come from the Mercedes EQS, which is the electric version of the company's Mercedes-Benz S-Class luxury sedan. The EQS sedan will begin selling in the U.S. and Europe this summer, and in China at the start of 2022, according to Reuters. 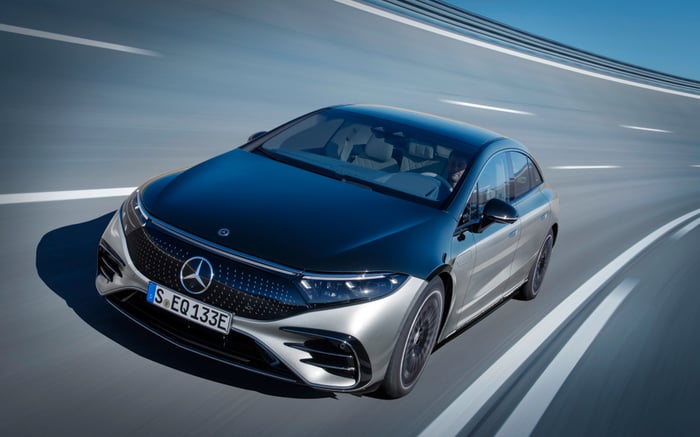 The EQ-Night presentation on Sunday will be the world premiere for the EQB SUV, and the Asian premiere for the EQS. Mercedes is stressing the luxury aspects of its vehicles. It says the EQS is "the most aerodynamic production car in the world," resulting in low wind noise and added range. It will be available with a maximum range of 478 miles, compared to 412 miles for the long-range Tesla Model S.

After the Chinese launch of the EQB SUV, the company says the European version will follow later this year, and then it will be available on the U.S. market in 2022. Pricing for both models should be available closer to when they go on sale.