Please ensure Javascript is enabled for purposes of website accessibility
Log In Help Join The Motley Fool
Free Article Join Over 1 Million Premium Members And Get More In-Depth Stock Guidance and Research
By Cory Renauer - Apr 17, 2021 at 6:49AM

The digital health start-up's participation in a new Medicare program could be a very big deal.

Shares of Clover Health (CLOV -1.51%) have lost about half of their value since Chamath Palihapitiya's special acquisition company took it public just a few months ago. Despite a few months of lousy performance, enthusiasm for the digital health upstart is still going strong on Wall Street. Bank of America recently reiterated its buy rating on the stock with a $15 price target that suggests it could double your money.

A new direct contracting program from the Centers for Medicare and Medicaid Services (CMS) inspired Bank of America analyst Kevin Fischbeck to make such a bold call. Could he be right, or is this just a flash in the pan? 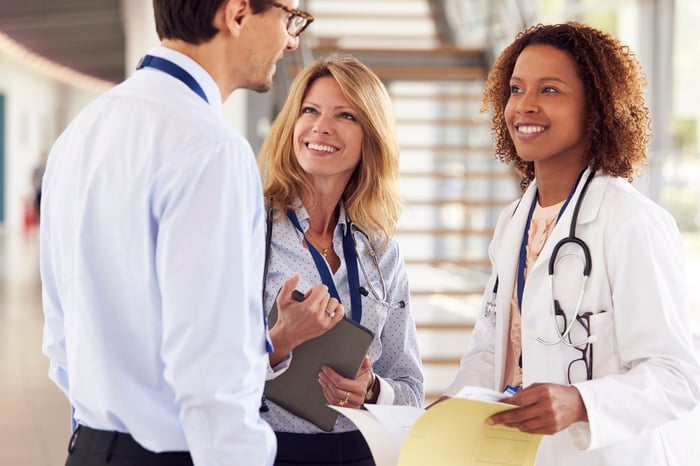 Before we can measure Clover Health's ability to turn its stock price around, it's important to understand why it dropped in the first place. In a nutshell, investors were hoping that access to more capital through a recent IPO would accelerate growth.

Investors were more than a little disappointed this March when the company told investors to expect somewhere between 10,000 and 12,000 new Medicare Advantage enrolled clients by the end of 2021. That's nothing to sneeze at, but it isn't any better than the company had been performing before it raised around $670 million by merging with one of Palihapitiya's SPACs in January. Clover expects to finish 2021 with between 68,000 and 70,000 members but there were already over 66,000 Medicare Advantage members under Clover Health's care this February.

It's important to remember the vast majority of Medicare Advantage beneficiaries update their enrolment status around the same time each year, so expecting just a few thousand new members through the end of 2021 is hardly a reason to panic. Clover Health still expects Medicare Advantage membership to grow at a healthy rate that lands somewhere between 17% and 21% higher than in 2020.

Clover Health is a technology company with an unusual feature. Historically, around 80% of its sales come from direct contact between employees and Medicare beneficiaries. Once we consider the effect lockdowns had on general foot traffic among older adults last year, the company's recent performance has been more impressive than it looks and it's about to improve.

Something new from Medicare

Recently, CMS implemented a new program that's right up Clover Health's alley called the Global and Professional Direct Contracting Model. This is an effort to reduce expenses while improving the quality of care for Medicare Advantage beneficiaries. If this sounds familiar, it's because the Affordable Care Act established Accountable Care Organizations (ACOs) for the same purpose nearly a decade ago.

In order to receive bonuses from Medicare ACOs generally just need to keep their own members healthy enough to avoid expensive hospitalizations, which produces some flawed incentives. In a nutshell, some ACOs have learned it's a lot easier to beat national benchmarks for quality through selective arrangements with healthcare providers and suppliers rather than through true care management for everyone that needs it.

The new Direct Contracting program is a way to make a company like Clover Health accountable for all Medicare expenses incurred in designated geographic regions. This incentivizes companies to bring every available patient in their region into the fold while penalizing any attempts to avoid enrolling less-healthy subgroups.

Once Clover Health establishes a presence in Medicare Advantage markets, this scrappy underdog wins a majority of new beneficiaries and retains them at a higher rate than giant competitors like, CVS Health (CVS -0.11%) and UnitedHealth Group (UNH 0.17%). Offering physicians significantly higher reimbursement rates to conduct appointments with the Clover Assistant app is the single most effective tool Clover Health has for onboarding new physicians. Over time, providing well-coordinated care with help from the Clover Assistant helps to keep medical costs low, including beneficiaries' out-of-pocket costs.

Clover Health expects total Medicare Advantage costs to reach around 90% of premiums received this year. Medical care ratios that fall below 85% incur a stiff penalty from CMS. This means Clover Health's operational performance is hardly any worse than its gigantic peers. Remember, CMS reimburses Clover Health at the same rate for coordinating care that it offers UnitedHealth and CVS Health. Somehow, though, Clover still manages to cut physicians a much larger slice of the pie.

New beneficiaries with uncoordinated care tend to rack up significantly more medical expenses in their first year with Clover Health than during subsequent years. Despite the challenge, Clover expects its medical care ratio for Direct Contacting to be around 100% in 2021 as the company gains access to 200,000 Medicare beneficiaries through contracts with participating providers.

Clover Health's past performance doesn't guarantee surging revenues year after year, but the company is positioned to make it happen. The next several quarters will probably be highly volatile for the stock but there's a good chance it will more than double your money over the long run.