Please ensure Javascript is enabled for purposes of website accessibility
Log In Help Join The Motley Fool
Free Article Join Over 1 Million Premium Members And Get More In-Depth Stock Guidance and Research
By Beth McKenna - Updated Apr 18, 2021 at 12:48AM

Shares of the hot connected home-exercise company could be in for a tough Monday stemming from news that broke on Friday evening.

Peloton Interactive (PTON -2.20%) stock could be in for a "Manic Monday," to borrow the title of an '80s hit song by the Bangles.

On Friday evening, news broke that the fast-growing maker of connected home-exercise machines is allegedly "fighting a federal safety agency's request that the company recall" its treadmills and "has delayed the agency's investigation into potential safety problems," according to The Washington Post, which cited officials close to the matter. 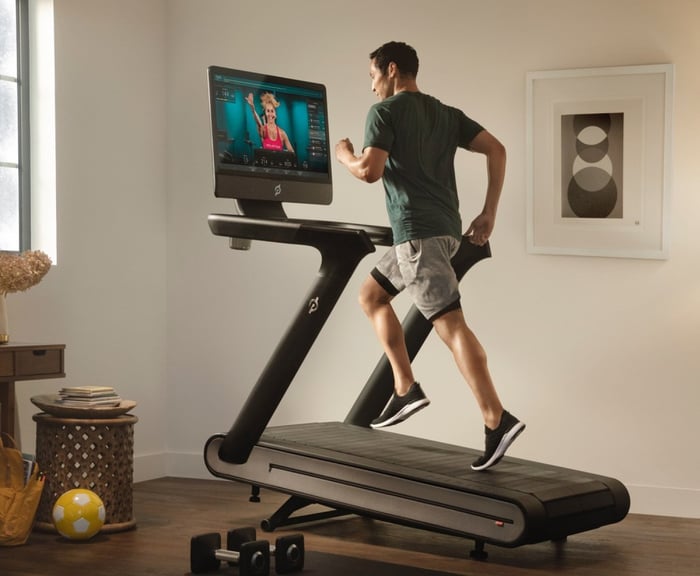 Consumers and investors first learned of potential safety issues with Peloton's treadmills on March 18. That's when co-founder and CEO John Foley posted a letter on the company's website saying he had recently learned about an accident involving the Tread+ that resulted in the death of a child. He also said that the company was aware of "a small handful of incidents involving the Tread+ where children have been hurt."

In the letter, which was also sent directly to the company's members, Foley reminded consumers to follow the safety instructions that the company provides. Those include keeping children and pets away from Peloton's equipment, and removing the safety key and storing it out of reach of children and anyone else who should not be able to start the treadmill. Peloton contends that its machines are safe when used in accordance with the provided safety instructions and warnings.

As The Washington Post reported, "The Consumer Product Safety Commission this week took the unusual step of issuing an administrative subpoena to require Peloton to disclose the name of the child who died and the family's contact information so regulators can continue an inquiry into what went wrong." According to the article, the company said it didn't initially provide that information because the child's family requested that it not be shared with the agency.

"The two sides also are clashing over whether Peloton's treadmills need to be taken off the market," the article said. The CPSC reportedly wants the company to recall its treadmills, as it's concerned about the number and severity of the injuries involving these machines. "Almost all recalls are voluntary, except in rare cases where the agency sues to force the issue," according to the article.

The article cites an official familiar with the case as saying that there have been "dozens" of injuries involving Peloton's treadmills, some of which involved pets. The victims, or at least some of them, were reportedly "pulled under the machines and suffer[ed] injuries that included broken bones and head trauma."

That description might make you curious about certain specifications of Peloton's treadmills. According to the company's website, its Tread and Tread+ have inclines that range up to grades of 12.5% and 15%, respectively. And their step-up heights are 8" and 11.5", respectively. In other words, the Tread+ has a higher space underneath the platform. Both models come with a removable safety key.

Many, if not most, consumer-focused companies will garner some degree of negative publicity at some point. But the risk to Peloton is that some consumers and investors could start becoming wary since the company has been embroiled in several controversies in its short history. (Peloton was founded in 2012 and held its initial public offering in September 2019.)

In March 2019, the company was sued by several members of the National Music Publishers Association for using copyrighted music in its streamed videos without the proper licenses. Later that year, Peloton ran an online holiday ad that sparked a big backlash on social media, with some consumers viewing it as sexist or at least out-of-touch.

If you own Peloton stock, you should probably sit tight, at least until more information on this issue comes out. Recall requests from the CPSC are not uncommon in some industries, including the one in which Peloton operates. Moreover, at this point, Peloton's bikes -- Bike and Bike+ -- are its bread-and-butter in the hardware realm. And, of course, it's the leader in a space that is rapidly growing and still has a long runway for growth.

That said, if you are considering buying additional shares or don't already own the stock, you might want to hold off for now. You could get a chance to buy the stock at a lower price in the near future.