Please ensure Javascript is enabled for purposes of website accessibility
Log In Help Join The Motley Fool
Free Article Join Over 1 Million Premium Members And Get More In-Depth Stock Guidance and Research
By Brent Nyitray, CFA - Apr 18, 2021 at 6:39AM

Can a financial be a cyclical? Yes.

Calling a financial stock a "cyclical" may seem like a misuse of terms at first glance. The term generally refers to companies that are highly sensitive to the economy, and it historically conjures up images of smokestack industries like steel and autos. During good times they make a lot of money, and during recessions they tend to lose a lot. As a result these companies tend to have extremely low price-to-earnings ratios during booms and large price-to-earnings ratios during recessions. How would this logic apply to a mortgage banker like UWM Holdings (UWMC 5.08%)? 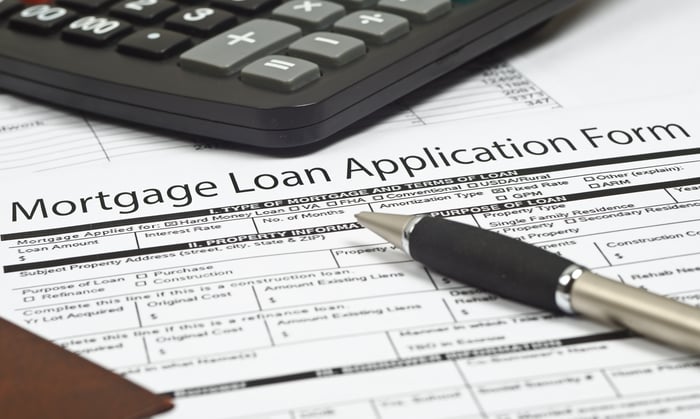 A different type of cyclical stock

Mortgage banking is a highly cyclical business, but it isn't tied to the economy the way an industrial like Ford Motors or 3M is. Mortgage banking tends to do well in the middle of recessions because the Federal Reserve has usually cut rates to support the economy by then. The big drop in rates makes it profitable for homeowners to refinance their loans, which generates activity for the mortgage bank. Real estate in general is an early-stage performer; note that housing starts spike almost immediately after a recession, with the exception of 2009. It is important to remember where we are in the cycle. The economy is in an early stage of recovery, which means good things for industrials. That also means that the best part of the cycle is in the rearview mirror for mortgage banks, which is why those stocks are struggling.

Mortgage banking is a feast-or-famine industry, and can have good years and awful ones. That said, unlike with a traditional smokestack cyclical stock, mortgage bankers generally do not have a lot of fixed costs. When times get lean, they tend to let a lot of their staff go, and most of a mortgage bank's costs are variable, like commissions, per-loan fees, etc. If they aren't doing loans, they aren't paying them. They generally don't report huge losses the way an industrial would. Note that I am excluding the financial crisis as a special case, driven by a residential real estate bubble. Real estate bubbles are rare events, and it is unlikely anyone with money in the market is going to live to see another in the U.S.

The broker model is different

UWM Holdings is a different type of originator from primarily retail shops like Rocket or Guild. UWM operates a wholesale model (its signature brand is United Wholesale Mortgage), which means it caters primarily to mortgage brokers. Mortgage brokers are similar to mortgage bankers, but they have the ability to work with any wholesaler they wish. This means that brokers can get better deals since they aren't stuck sending borrowers to only one company. Prior to the bursting of the housing bubble, brokers were a much bigger part of the landscape, and UWM is betting that will be the case again. In other words, even if originations overall stagnate, the wholesale business might take share from retail, which could mean increasing revenues during hard times.

UWM has invested a lot in technology, which can also help with the cost of personnel. Technology is a big part of UWM's value proposition to a broker. Since the broker doesn't work for the company actually underwriting the loan, historically brokers haven't been involved in putting the loan together the way a typical mortgage banker would be. Needless to say, this can create surprises, which can ruin a broker's relationship with the realtor who recommended him or her. With UWM's technology, the broker gets much more visibility into the exact status of the loan.

UWM Holdings went public via a special purpose acquisition company (SPAC) last year and is down 43% year to date as rising interest rates have made investors wary of the sector. At Friday's prices, UWM Holdings is trading at 6.7 times expected 2021 earnings per share. The company also pays a quarterly dividend of $0.10 per share, which gives the company a 5.3% dividend yield. Given the Street's expectations of $1.20 per share in earnings next year, UWM is paying out about a third of its earnings as dividends, which is pretty conservative.

UWM is in a highly cyclical business, but it does have some features that make it less vulnerable to downturns than the typical cyclical. With a decent dividend yield and an interesting business model, UWM Holdings could be the cyclical stock for you.