The company just went public and has a gigantic market opportunity.

Shares of education technology company Coursera (COUR 4.59%) started trading on March 31 in concurrence with its initial public offering (IPO). The stock traded as high as $62 a share but has since settled down to around $45, giving the company an estimated $5.9 billion market cap. The company, founded in 2012, offers courses and certificates for companies, university students, and anyone else looking to learn new skills through its online platform that hopes to shake up the $2.2 trillion global education industry.

Is Coursera set to disrupt the multi-trillion-dollar education industry? Let's take a look. 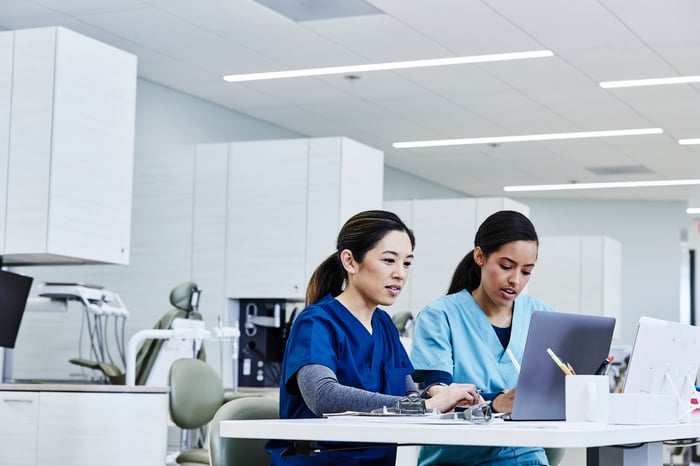 Coursera was founded in 2012 by two Stanford computer science professors, Andrew Ng and Daphne Koller. The current CEO is Jeff Maggioncalda, who joined the company in 2017. Ng is still the chair of Coursera's board of directors, while Koller is no longer associated with the company.

Customers of Coursera include individuals, enterprises, governments, and universities. Individuals, or what Coursera calls registered learners, come to the platform to learn and build skills for their current or new professions. According to Coursera's pre-IPO filings, it currently has 77 million registered learners. Employers can use Coursera for Business to help their workers develop new skills. Coursera for Business launched in 2016 and now has over 2,000 organizations paying to use its services. Over 100 government agencies also pay to access Coursera's content.

Lastly, traditional colleges and universities can offer online degrees and courses through Coursera for Campus. Launched in 2019, over 130 institutions are already customers of Coursera for Campus, which, according to management, was greatly accelerated by the COVID-19 pandemic.

Overall, while not its stated mission, Coursera can be summed up as trying to offer courses or degrees on as many subjects as possible with as many different price points as possible. You can spend as little as $10 for a two-hour guided project or over $40,000 for a full degree, whatever floats your boat.

This is a strong customer value proposition for users and educators alike. If Coursera can aggregate as many different certificates, universities, and educators as possible, it is likely that customers will be attracted to it over the competition, and will keep them coming back for multiple use cases.

Individuals are currently Coursera's largest revenue segment, making up 66% of its 2020 revenue. However, its fastest-growing segments are enterprise and degrees. Enterprise revenue has grown from $7.4 million in 2017 to $70.8 million in 2020, while degree revenue went from $2.5 million to $29.8 million in the same time period. That is some impressive growth and shows that Coursera has found some magic with its business and university partners.

Education is a tough market

There is a lot to like about Coursera's business. But historically, the education industry has proven to be a tough nut for digital companies like Coursera to crack. Less than 4% of global education and training expenditure is spent on digital solutions, which is a lot smaller than most industries.

There are also past darlings like 2U (TWOU -4.98%), another online education company that went public in 2014 and was supposed to disrupt the education market, but has trailed the S&P 500 substantially over the past five years due to struggles acquiring university partners for its platform.

Investors should also remember that COVID-19 likely gave Coursera an artificial boost in growth that will not repeat itself in 2021. And at a $5.9 billion market cap, that gives Coursera a price-to-sales ratio (P/S) of 20.1, which is a premium valuation relative to its other software peers.

Coursera has a noble mission to help anyone around the world build skills to make a living in the modern economy. If it succeeds in disrupting the $1 trillion+ education market, this could be a giant company in a decade. But with a premium valuation and a long history of companies that have failed in what Coursera is trying to do, it may pay for investors to exhibit patience with this new IPO.

Is IPO Stock Coursera a Buy?

Why Coursera Stock Got a Failing Grade on Wednesday