Please ensure Javascript is enabled for purposes of website accessibility
Log In Help Join The Motley Fool
Free Article Join Over 1 Million Premium Members And Get More In-Depth Stock Guidance and Research
By Zhiyuan Sun - Apr 23, 2021 at 6:30AM

Can you count on this company's novel gene diagnostic technology?

Bionano Genomics (BNGO 13.43%) has been one of the "get rich quick" stocks of 2021. Back in December 2020, it was a penny stock trading for as little as $0.50. Then, traders from the WallStreetBets Reddit group caught onto the company's technology, believing it was an accurate and precise diagnostic instrument for predicting cancer.

The company's shares subsequently rose by a record-shattering 3,038% within three months, turning many of its early shareholders into millionaires off even a small stake. However, many investors who did not cash out at the February highs are now out of luck. The stock is down 65% off those highs.

Bionano has attracted a dedicated base of short-sellers betting against its success. About 10% of its float is currently shorted. Can Bionano's stock beat the naysayers and pose another run-up in the future? 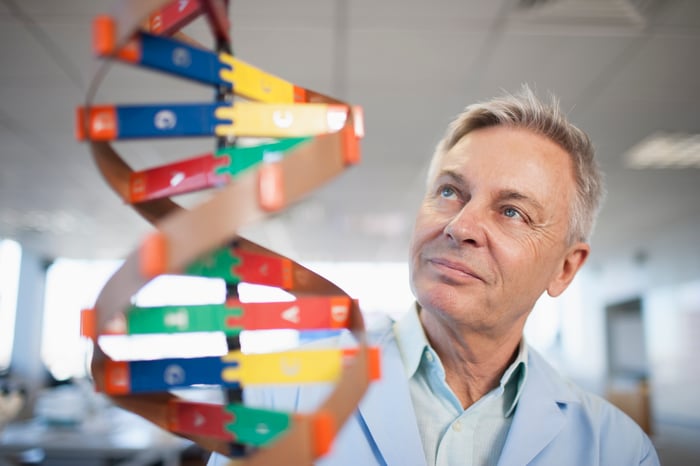 Last year, Bionano's product and service revenue declined by 16% year over year to $8.5 million due to the COVID-19 pandemic's disruption of normal laboratory testing. Meanwhile, its operating losses increased to $38 million from $25.9 million in 2019 thanks to a ramp-up in research and development (R&D) activities. None of these metrics look particularly impressive. But the problem with looking at past financials is that it tends to undermine a company's potential when it is in the middle of a development stage.

Bionano's secret sauce lies in its cytogenetic testing device called the Saphyr System. Unlike traditional molecular testing that relies on gene sequencing, Saphyr scans for structural abnormalities of chromosomes within a cell's nucleus. Its main selling point is that the device can map a patient's entire genome to enable the better detection of certain disorders, such as rare hereditary muscle diseases. The device allows for integrated testing, accepting all kinds of samples from tissue biopsies, to blood, to cultured cells, to bone marrow aspirates. There are over 2,500 cytogenetic labs Bionano believes it can market to, resulting in a total addressable market of $3.25 billion.

In 2020, Bionano installed 97 Saphyr devices, mainly at research labs in the EU and Canada. This year, the company expects to take that number up to 150. Bionano also has more than 252 issued and pending patents protecting its Saphyr System, including 29 licensed from its collaboration with Princeton University. The company was originally founded as a spinout of the academic institution, but has no ties with it aside from the payment of annual license fees for use of Princeton's genome technology.

Has the technology caught up?

The main drawback behind the device and its optical genome mapping technology is its resolution. Every individual cell analyzed by Saphyr can generate upwards of 1,300 gigabytes of data due to high the high number of genes packed within a cell, making it very difficult to distinguish the components. Its results aren't always accurate. Saphyr pinpoints the physical location of DNA molecules (via a microscope light) rather than revealing their sequence via a polymerase chain reaction (PCR).

In a study conducted by France's National Institute of Agricultural Research, scientists compared Bionano's Saphyr with Oxford Nanopore Technology's 3rd generation gene sequencing test MinION on their ability to detect structural abnormalities in baby plant cells. The investigation showed that MinION detected twice the amount of structural abnormalities as Saphyr, and had better cost efficiency. As expected, Saphyr caught on to many of the sample's large structural deficiencies but failed to identify them in complex or divergent regions.

Is now the time to go long?

Saphyr is approved for use only for research purposes in the U.S. To receive clearance from the U.S. Food and Drug Administration, Bionano needs to either pursue the 510(k) pathway or seek premarket approval after running clinical trials.

At the moment, the technology needs more work, and Bionano hasn't even started applying for regulatory clearance. So it's best to avoid the stock until more progress is made. Its market cap of $1.7 billion is way too high for a healthcare company betting on the success of a single early stage medical device.