Please ensure Javascript is enabled for purposes of website accessibility
Log In Help Join The Motley Fool
Free Article Join Over 1 Million Premium Members And Get More In-Depth Stock Guidance and Research
By Howard Smith - Apr 23, 2021 at 10:38AM

The craft brewer rode its popular hard seltzer to a big earnings beat.

Shares of craft brewer Boston Beer (SAM 3.84%) popped in the premarket, and initially traded up 8% Friday morning after the maker of Sam Adams beer reported first-quarter earnings Thursday evening. As of 9:45 a.m. EDT, the stock had pared some of those gains, trading almost 3% above yesterday's closing price.

Boston Beer reported earnings of $5.26 per share, blowing past the mean analyst estimate of $2.61 per share. Net revenue of $545 million also soared past estimates and grew 65% from the year-ago period. Much of the credit for the successful quarter can be attributed to the continued success of the company's Truly Hard Seltzer and Twisted Tea brands. 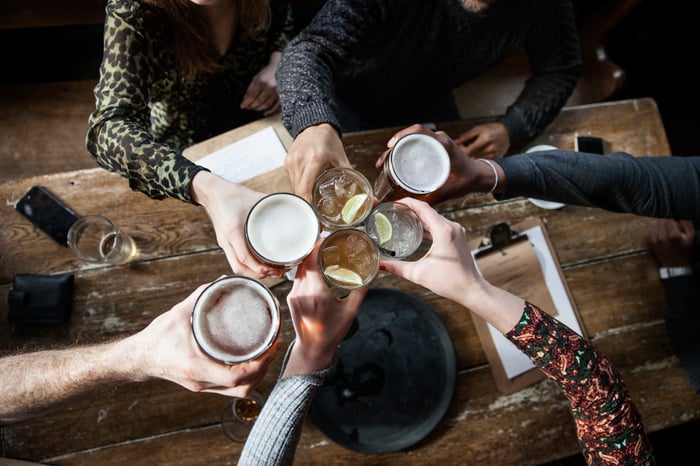 The strength in the hard seltzer and iced tea brands was partially offset by declines in sales of its Samuel Adams and Dogfish Head beer brands, as well as Angry Orchard hard cider.

Boston Beer continues to lead the growth in popularity of hard seltzers. The company recently launched Truly Iced Tea Hard Seltzer, which it said has helped the Truly brand double sales since last year. Boston Beer president and CEO Dave Burwick said in the earnings release that the Truly brand outgrew the overall hard seltzer category, giving the brand a market share of over 28%.

There is new competition in the segment, however. Coca-Cola (KO 2.34%) has launched a hard seltzer product line inspired by its Topo Chico sparkling mineral water brand. Topo Chico Hard Seltzer has been expanding in Latin America and Europe, and was recently launched in some key U.S. markets. Investors in Boston Beer would be smart to monitor whether Truly's market share is affected by the new offering going forward.