Please ensure Javascript is enabled for purposes of website accessibility
Log In Help Join The Motley Fool
Free Article Join Over 1 Million Premium Members And Get More In-Depth Stock Guidance and Research
By Cory Renauer - Apr 24, 2021 at 6:21AM

Hospitals overwhelmed by COVID-19 outbreaks have had to reschedule a lot of elective operations over the past year and a half. This hasn't been great for businesses that rely on increasing procedure volume, like Intuitive Surgical (ISRG 2.69%).

While the pandemic has depressed sales growth in the present, there are plenty of signs to suggest that Intuitive Surgical's best days are still just ahead. During the company's first-quarter earnings call, CEO Gary Guthart said he was "seeing adjustments in the healthcare system that favor our offerings."

Here are a few of the big adjustments that those 10 words were referring to. 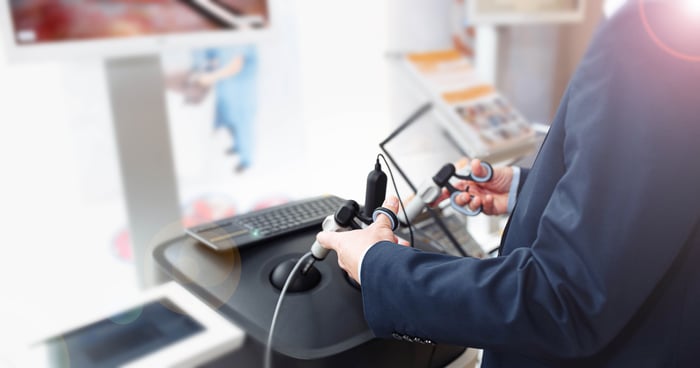 Training surgical teams to use da Vinci surgical systems is an important but often overlooked aspect of Intuitive's business. In fact, training as many surgeons as quickly as possible is one of the best ways for the company to stay ahead of the competition.

Trends we've seen in the telehealth space for everyday consumers have spilled over into the medical field. A global pandemic that left no other options for training has done wonders for the adoption of the company's long-distance services.

Intuitive Surgical offers surgeons around 70 different instruments for use in its multiport surgical platforms, but they'll probably see less use over time. That's because minimally invasive surgery performed by inserting multiple instruments through a single incision is an increasingly popular option.

The da Vinci surgical systems that made Intuitive famous are almost entirely of the multiple port variety, but the company's new single-port (SP) offerings are quickly gaining steam. In the first quarter, the company placed six new da Vinci SP systems, bringing the total to 67 in the U.S. and 8 in South Korea.

Intuitive's single-port offering has been approved by the Food and Drug Administration to tackle just a couple of common procedures so far, but this list will expand. A clinical trial that could help da Vinci SP become the go-to option for colon cancer patients is expected to begin in the U.S. this summer.

Lung cancer isn't the most commonly diagnosed malignancy, but it is the most deadly. New targeted treatments are highly effective, but oncologists can't choose one until they know exactly which genetic mutations are driving their patients' disease. Intuitive Surgical's Ion endoluminal system is a flexible tool custom-built to safely retrieve tumor samples embedded deep in a patient's lung.

During the first quarter, Intuitive Surgical installed 14 new Ion machines in the U.S., bringing the total to 50. All working Ion systems are in the U.S. at the moment, but soaring demand abroad could make this product a huge success. In 2015, China reported more than 787,000 new lung cancer diagnoses. An aging, urbanizing population means this figure will soon pass 1 million annually, if it hasn't already.

Blood-based diagnostic tools from Guardant Health (GH 8.23%) and its peers are gaining traction, but liquid biopsies can only detect DNA that breaks free from tumor cells. As a relatively safe way to perform lung biopsies, Intuitive Surgical's Ion systems could be a major revenue stream down the road.

At recent prices, Intuitive Surgical shares aren't cheap. The stock has been trading at around 68.5 times forward earnings expectations, which implies a great deal of success.

Investors don't want to let go of any Intuitive Surgical shares, but this probably isn't the best time to buy more, either. At their current valuation, there are better healthcare stocks to buy right now.