The stock is off 60% from its all-time high.

Poshmark (POSH -1.80%) shares are down almost 60% in the last few months, a disappointing turn of events following the company's initial public offering (IPO) in January when the stock popped 142% on its opening day.

Shares are likely down so much due to the timing of its market debut, which came just weeks after DoorDash, Airbnb, and other hyped-up IPOs were surging 100% or more on their first trading days (and have since seen some air come out of their share prices as well). Management also gave out relatively weak guidance compared to Wall Street estimates in March, which exacerbated the sell-off.

With shares near their IPO pricing, is it time to buy the dip on Poshmark stock? 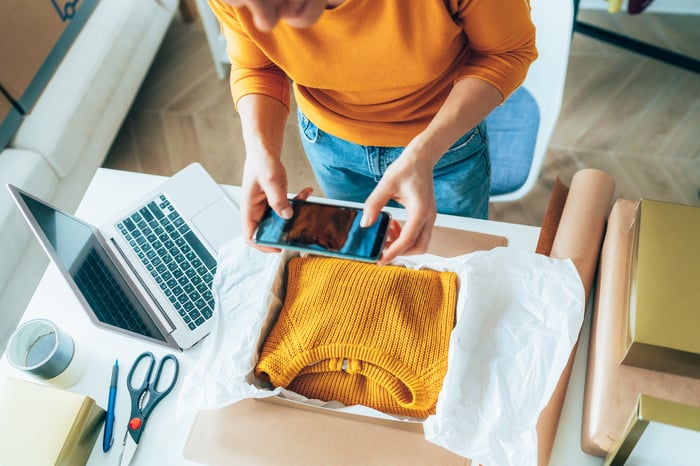 Poshmark is a social marketplace for apparel, accessories, and other items. Its platform is intended to combine the human connection from traditional shopping experiences with the scale and ease of e-commerce. Founded in 2011, Poshmark currently has 6.5 million active buyers on its platform.

The company serves both sellers and buyers. Sellers list their items (typically from their own closets) in their Poshmark profile for other users to browse and purchase. Beyond the large marketplace, Poshmark offers users curated selling tools, efficient fulfillment options, and a protected payments platform. Buyers turn to Poshmark for good deals and to follow their favorite sellers.

Management has noted that buyers who come to Poshmark often become sellers after using the platform. This further drives Poshmark's value proposition, as users come to the service to not only buy items but also to make some money themselves.

In 2020, Poshmark reported $262.1 million in revenue, up 28% from 2019. It also generated $23.4 million in operating income last year, which shows the company can grow its business without years of deep losses as it invests in infrastructure and marketing. In fact, sales and marketing spend actually declined last year from $132.5 million to $92.9 million, which is a great sign for customer retention and engagement.

An attractive aspect of Poshmark's business model is that it doesn't own any inventory. This advantage contributed to the company's high gross margin of 83.4% in 2020. Including the proceeds raised in its IPO, the company has a relatively clean balance sheet with over $500 million of cash and marketable securities on hand to invest in growth or strategic acquisitions.

With a market cap of just over $3 billion as of this writing, Poshmark currently trades at a price-to-sales ratio of 11.6 and a price-to-earnings ratio (P/E) of over 180. While these multiples look expensive, it is important to understand the operating leverage embedded in Poshmark's business.

With an operating margin of only 8.9% in 2020 but over 80% gross margin, that indicates there is a ton of room for the company to expand its operating margin as the business scales. If the company can continue to grow its top line at a double-digit rate while steadily reducing expenses like marketing and streamlining operations, the high earnings multiple will come down quickly.

Investors should also consider the gigantic market opportunity that is social commerce. The industry is supposed to grow to $600 billion in global spend within the next seven years. Pinterest and Instagram will likely capture some of this market, but there is plenty of opportunity for Poshmark to grow its business alongside the competition. Taking all of these factors into consideration, now seems like the time to take advantage of the sell-off and to buy shares of this social marketplace.

1 Recession-Resistant Stock Down 88% That Could Soar

Why Poshmark Is a Stock Worth Watching