The movie theater operator is getting a boost from more than just the Oscars.

Several things help explain why the stock of AMC Entertainment Holdings (AMC -5.54%) is up more than 400% so far in 2021, including a retail trading frenzy from Reddit users. But today, shares of the movie theater operator are getting a boost from hope the business itself is about to accelerate, and are trading up about 9.5% as of 12:45 p.m. EDT.

Last night's Academy Award ceremony probably got investors thinking that the prospects of the company are heading in the right direction. Even though streaming leader Netflix won the most Oscar awards in the ceremony with seven new trophies, the winning picture as well as the film with the winning best actor both have more theater releases coming. And a big-name actor is also touting the theater experience. 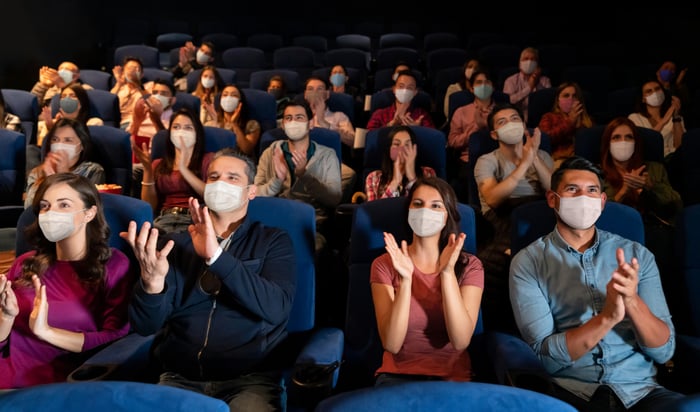 Investors in AMC have been waiting for consumers to return to theaters. The company said last month that virtually all of its U.S. theaters had reopened. As the vaccination rollout continues, international locations will follow suit. And more movie fans will likely want to see the films that took home the Oscars last night on the big screen. Best picture winner Nomadland was simultaneously released to streaming and in theaters. And The Father, with best actor winner Anthony Hopkins, began a limited release in New York City and Los Angeles and is still rolling out in theaters outside the U.S.

F9, the latest installment of the Fast & Furious franchise is scheduled to be released on June 25, and star Vin Diesel put out a promo trailer pushing fans to see it in theaters. "There's nothing like that moment when the lights go down, the projector ignites, and we believe," he said while narrating the film's trailer.

Investors today seem to be betting that there is pent-up demand from audiences and AMC will benefit as moviegoers go back to theaters.