The imitation meat maker is also bringing a new, improved version of the Beyond Burger to supermarket shelves.

As American diners continue to feel peckish for chicken, and traditional meat-processing companies gear up for a reprise of 2019's "chicken sandwich wars," plant-based meat manufacturer Beyond Meat (BYND 6.03%) appears to be planning its own meat-free entry in the sector. Inside sources told Bloomberg a chicken substitute is in the works with a planned release this summer.

Beyond Meat's plant-based chicken plans remain private, and the company declined to comment on the information. A previous foray into faux fowl, Beyond's chicken strips, was discontinued in the first quarter (Q1) of 2019, according to a prospectus from that year. Just one month ago, TheStreet reports, Chuck Muth, the company's chief growth officer, indicated a chicken product will appear "sometime in the relatively near future." Such a launch would tap into demand for chicken that has been growing since the 1940s, according to the United States Department of Agriculture (USDA), with chicken now the USA's most available meat. 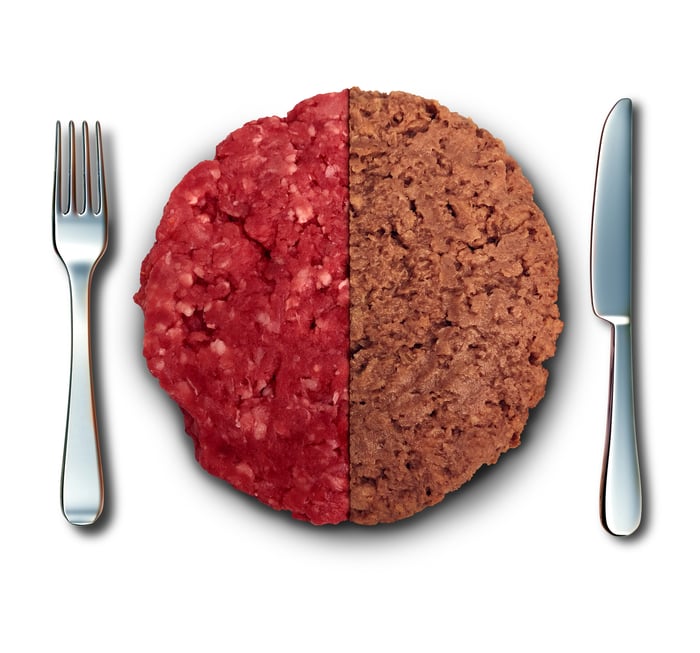 Beyond Meat also announced yesterday a new version of its plant-based hamburger, dubbed the Beyond Burger 3.0, will appear in grocery stores beginning on May 3 and in restaurants starting in June. The company says both total fat and saturated fat will be 35% lower than in animal-derived hamburgers. The patties also feature zero cholesterol and reduced calories.

The company will offer advance samples of the Beyond Burger 3.0 on May 1 and 2 in Atlanta, Chicago, Dallas, Los Angeles, Miami, and New York City. The press release doesn't indicate when Beyond will start offering the upgraded variant in Europe where it's planning to release its plant-based meats in thousands of stores this spring.