Please ensure Javascript is enabled for purposes of website accessibility
Log In Help Join The Motley Fool
Free Article Join Over 1 Million Premium Members And Get More In-Depth Stock Guidance and Research
By Keith Speights - Updated Apr 29, 2021 at 10:28AM

It's only in its early stages, but that could mean even bigger returns if the company's pipeline candidates are successful.

Sundial Growers (SNDL 2.02%) vaulted onto the investing stage a few months ago in a major way. It's become one of the hottest meme stocks with a year-to-date gain of more than 90%. But while Sundial has attracted a lot of attention, there are stocks that could offer greater growth prospects that aren't so well known.

The stocks of companies developing psychedelic drugs aren't in the limelight nearly as much as marijuana stocks are. Some of these companies, though, are worth checking out. Cybin (CYBN 0.54%) stands as a great example. Forget Sundial Growers -- put this psychedelic stock on your radar. 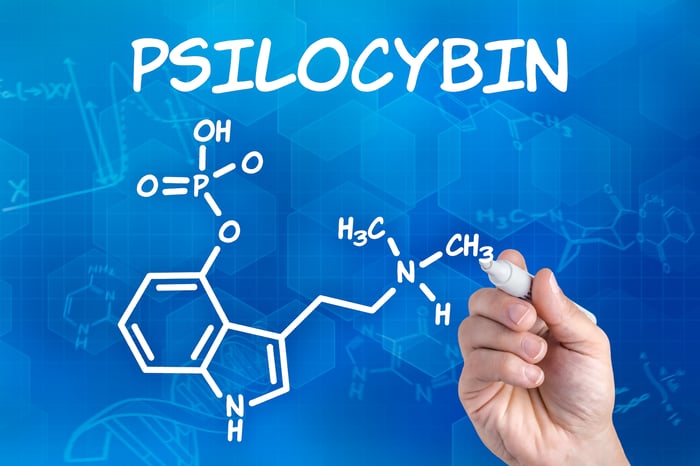 You might not have heard of Cybin yet. The company uplisted its shares to the OTCQB Venture Market less than two months ago. The stock previously traded on the over-the-counter pink sheets in the U.S. and listed on the Canadian NEO Exchange in November 2020.

But several big-name venture capital funds are quite familiar with Cybin. Janus Henderson, LifeSci Ventures, and RA Capital are key shareholders in the company.

Cybin's pipeline includes four psychedelic drug programs. The company is currently evaluating its lead candidate, sublingual psilocybin drug CYB001, in a phase 2 clinical trial as a potential treatment for major depressive disorder (MDD). It also has two preclinical candidates, CYB003 and CYB004, both of which are deuterated versions of tryptamine. In addition, Cybin is researching the use of phenethylamines as a potential treatment for neurological disorders.

Cybin announced a deal earlier this year to use Catalent's Zydis orally disintegrating tablet technology to deliver CYB003. It plans to file an Investigational New Drug (IND) application with the U.S. Food and Drug Administration (FDA) later this year to advance the experimental therapy into early-stage clinical testing in treating alcohol use disorder.

Just how promising is Cybin's pipeline? Roth Capital analyst Elemer Piros initiated coverage on the stock this week with a buy recommendation and a price target of $10. That's more than six times Cybin's current share price.

There are two main reasons to be optimistic about Cybin's prospects. Most importantly, studies have shown that psychedelic molecules hold the potential to be effective in treating a wide range of conditions, including addiction, depression, and post-traumatic stress disorder.

If Cybin's psychedelic drug candidates eventually win regulatory approvals, the market opportunities are tremendous. The National Institute for Mental Health estimates that the direct and indirect costs of mental disorders in the U.S. total $467 billion.

The global opportunities are even greater. The National Centre for Biotechnology Information pegs the worldwide total for direct and indirect costs of mental disorders at close to $2.5 trillion.

To be sure, Cybin still has a long way to go with plenty of hurdles ahead of it. The risks of failure in the company's clinical studies shouldn't be overlooked.

Cybin doesn't currently generate revenue and is unprofitable. Like Sundial Growers, the company has had to raise additional capital through stock offerings. It seems likely that more of those will be on the way in the future, which means the value of Cybin's shares could be diluted.

Clinical-stage life sciences stocks such as Cybin won't be suitable for many investors. They're highly volatile and risky. Of course, that's also true of unprofitable cannabis stocks like Sundial. However, for aggressive investors, Cybin appears to be a stock to closely watch.