Please ensure Javascript is enabled for purposes of website accessibility
Log In Help Join The Motley Fool
Free Article Join Over 1 Million Premium Members And Get More In-Depth Stock Guidance and Research
By Brent Nyitray, CFA - Apr 29, 2021 at 8:03AM

The worst may be over, though.

As the U.S. population gets vaccinated and COVID-19 restrictions are lifted, office real estate investment trusts (REITs) are beginning to see the green shoots of a recovery. On the West Coast, some of the major players never skipped a beat, but the New York City office market was hit hard.

Manhattan office REIT SL Green Realty (SLG 2.73%) recently reported first-quarter numbers and gave an update on the office market. The company is optimistic that the market has turned the corner, but questions still remain about demand going forward. 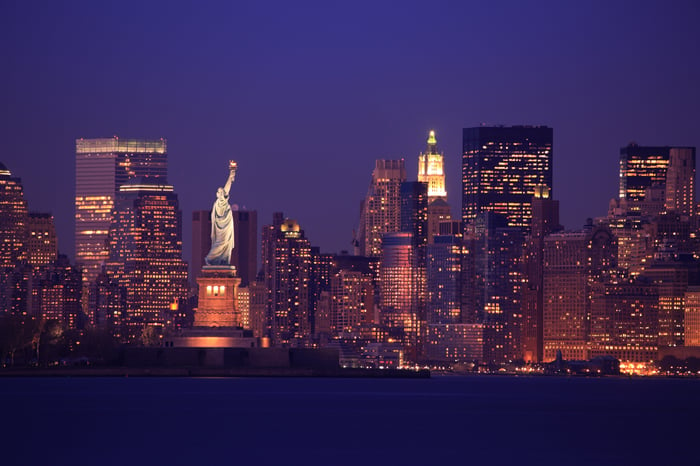 The big concern for office REITs in general has been the viability of their business model, as the COVID-19 pandemic proved that many industries can comfortably adopt a work-from-home model. While employees generally prefer telework, some companies have been reticent about it. But for SL Green, which is the biggest office landlord in Manhattan, the fear is that employers would choose to decamp for cheaper locations.

SL Green reported that it signed 21 office leases for just over 350,000 square feet in the first quarter. Just over half of these were replacement leases, and the new rents fell by 2.8%. SL Green also had to offer 6.9 months of free rent and an improvement allowance to keep tenants in the space. Tenants have definitely had the upper hand in negotiations over the past year, and face rents -- that is, the amount on the lease, regardless of incentives or discounts -- dropped between 5% and 10%. That said, the higher-quality buildings and new construction have managed to hold pricing.

On the earnings conference call, Steve Durels, director of leasing and real property, said that the worst is definitely over:

I'm a strong believer -- we are strong believers that the market has stabilized as far as where net effectives are. The concessions, we're not seeing is increasing. They are brutal right now, they are historic high as far as the amount of concessions go, but I think over the past 90 days they've clearly stabilized. We're not doing more TI [tenant improvements, basically free upgrades] or more free rents for new tenants coming into the market, as opposed to what then we were doing at the depth of pandemic. So, I think, we've seen the worst of the of the rents erosion. And I think at this point we're bumping along the bottom and waiting for a turn back up.

While pricing may have stabilized, the big question for investors is when offices will get back to pre-COVID normalcy. The consensus of SL Green's tenants appears to be a full return of workforces sometime this summer. In fact, the company mentioned on its call that bigger companies like Bloomberg, Amazon, and JPMorgan Chase have set hard dates for a full return to the office. Financial services seems to have the most demand for space. SL Green expects New York City employment to return to pre-pandemic levels by the end of the year.

The risk is that employment could return, but if enough workers continue to work from home, companies will need less space going forward. But note that occupancy has been relatively steady, with occupancy at 94.2% at the end of the first quarter of 2021, compared to 94.4% at the end of 2020 and 94.3% at the end of 2019.

The company is trading at a historically low multiple

SL Green earned $7.28 per share in funds from operations (FFO) last year, which means that at Wednesday's closing price, the stock is trading at a multiple of 10.2. REITs tend to use funds from operations to describe their income, as opposed to earnings per share, because they have so many non-cash charges, like depreciation and amortization. That said, earnings per share (EPS) is still a good way to look at historical performance, provided you use it for looking at longer-term trends. EPS can be volatile, so you have to be careful putting too much faith in it and mentally smooth out the peaks and valleys. If you look at SL Green's historical P/E ratio, it is right around its lowest levels. 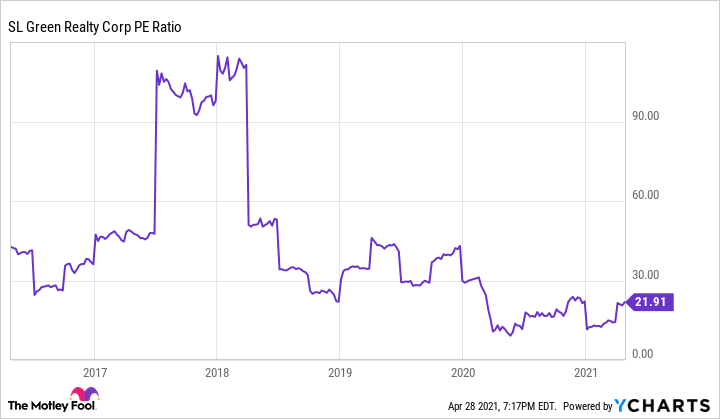 SL Green also pays a monthly dividend of $0.303 per share, which gives the stock a yield of 4.9%. Income investors who are attracted to cheap stocks might find SL Green an interesting play, especially since many of the COVID-19 recovery stocks have already made their moves. The bet with SL Green is that COVID-19 did not cause a sea change in employer sentiment regarding New York City real estate, and you are getting in at an attractive multiple. The risk is that SL Green is a value trap -- a cheap company that only gets cheaper.